Meanwhile, the condition of Jain, who was hospitalised on Sunday night, is stable even as he is kept in the ICU of the Lok Nayak Jai Prakash Narayan Hospital. 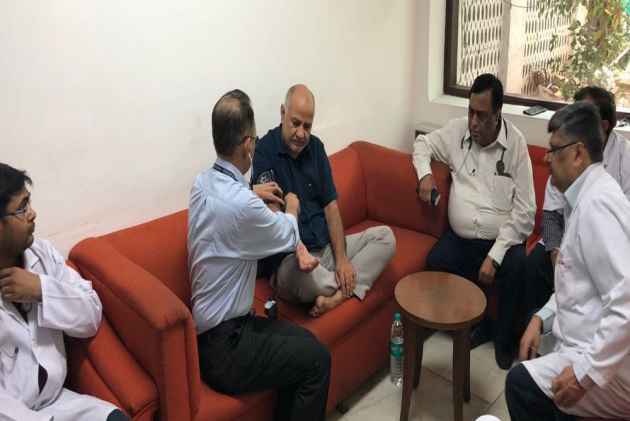 A day after Delhi health minister Satyendar Jain was hospitalised, chief minister Arvind Kejriwal on Monday said his deputy, Manish Sisodia,  was also  being shifted to hospital. Both Jain and Sisodia had been on an indefinite hunger strike at the Lieutenant Governor office for nearly a week.

"Manish Sisodia being shifted to hospital," Kejriwal said while sharing a tweet.

Meanwhile, the condition of Jain, who was hospitalised on Sunday night, is stable even as he is kept in the ICU of the Lok Nayak Jai Prakash Narayan Hospital.

Jain was rushed to the LNJP Hospital after his health deteriorated.

These are absolute indicators for hospitalisation, said Dr Passey.

"Our team of specialists, who examined him, advised hospitalisation following which he was shifted to the ICU where necessary investigations and treatment was started instantly," the doctor said.

"He (Jain) had to be put on oxygen therapy and he felt better after he passed urine at 2.30 AM. His general condition is stable," Dr Passey said.

Passey said Jain is not taking food orally and is being given glucose, electrolytes and medication for symptomatic relief intravenously.

"Our team of specialists have examined him again today and have advised some investigations. He is likely to be kept in the ICU for the next 24 hours for observation," he said.

Last night, Chief Minister Arvind Kejriwal confirmed that his colleague has been hospitalised.

"Satyender Jain shifted to hospital due to his deteriorating health (sic)," he tweeted.

Jain had gone on strike on Tuesday, and his sugar level had further dipped on Saturday, even as he asserted that the AAP government will continue to fight for people of the city.

In a tweet, the minister had shared a copy of his health summary, which said, the ketone level in urine had increased to a "large amount".

"My reports. Ketones are increasing and blood sugar is constantly low. Lost 3.7 kg wt in 4 days. We will continue fighting for ppl of Delhi (sic)," he had tweeted.

On Saturday, a team of medical specialists had examined Jain and Sisodia, who is also on indefinite fast at the LG office since Wednesday.