After SC Verdict On Delhi, Narayanasamy Says It's Relevant To Puducherry Too

He hoped Bedi would now change her ways. 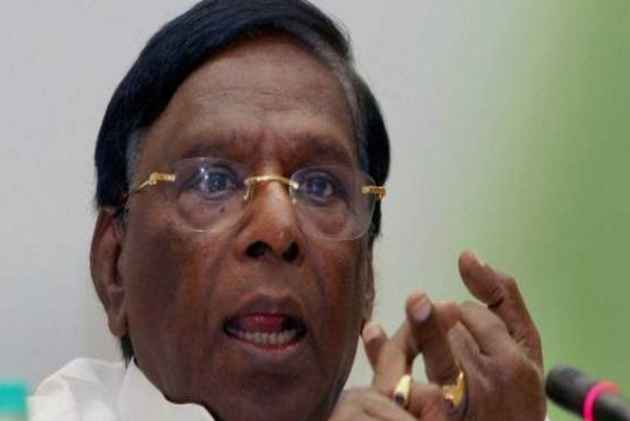 The Supreme Court judgement curtailing the powers of the Lt. Governor of Delhi opn Wednesday prompted a demand for its replication in Puducherry, with chief minister V Narayanasamy warning he would launch legal proceedings if the verdict was violated.

Naranaswamy, who is locked in a bitter turf war with Union Territory Lt. Governor Kiran Bedi for a long time now, hailed the Supreme Court judgement, and insisted it was "totally applicable" to Puducherry.

A combative Narayanasamy warned he would file a contempt petition if the apex court order was not followed in Puducherry.

"I welcome the verdict, and it is totally applicable for the government of Puducherry, which is also a Union Territory. It is a historic and grand victory of the elected representatives," he told reporters.

"Whoever functions contrary to the judgment now delivered by the apex court would face serious action. I myself would file contempt petition against those failing to act in consonance with the supreme court verdict," he said, without naming Bedi.

In a judgement seen as a major victory for Delhi Chief Minister Arvind Kejriwal, the Supreme Court today ruled that the LG has no independent power to take decisions and is bound by the elected government's advice.

The Supreme Court said that except for three issues -- public order, police and land -- the Delhi government has the power to legislate and govern on other issues.

Narayanaswamy has repeatedly accused Bedi of "overreach and interference" in the day-to-day running of the administration.

He has often deprecated Bedi's surprise field visits and criticised her for issuing orders to government officials without consulting the chief minister or ministers concerned, besides sitting on files relating to farm loan waiver and free education for Dalits.

The chief minister hoped Bedi, who has often put "hurdles" in the way of implementation of various decisions of his government, would change her ways following the apex court judgement.

"Now everything would become a thing of the past.... the Supreme Court's verdict has establishedthe spirit of democracy and the purpose of elected government," he said, noting that the apex court has ruled that the Lt. Governor should not be "obstructionist".

Narayanasamy said he has always insisted that the Lt. Governor does not have independent decision making powers and that "real power must lie with the elected government".

About Bedi passing on instructions and issuing orders through social media, the chief minister said,"The the era of whatsApp, Twitter and Facebook frequently resorted to by the Lt Governor would now become a thing of the past."

Narayanaswamy asked government officers not to turn up for any discussions with the Lt. Governor without informing the minister concerned about the purpose of the meeting.