The vision document was submitted after an angry apex court on July 11 lashed out the state government for its apathy towards the Mughal era monument, 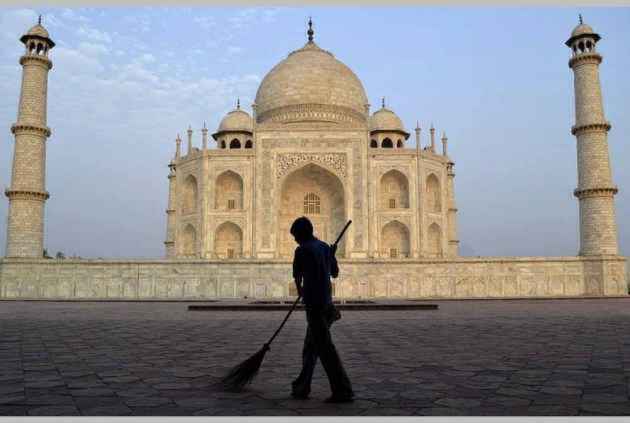 The entire Taj Mahal precinct should be declared a no-plastic zone and all polluting industries in the region closed, the Uttar Pradesh government suggested in its first draft report of a vision document on protection and preservation of the 17th century monument filed in the Supreme Court today.

The Uttar Pradesh government mentioned the matter before a bench of Justices M B Lokur and Deepak Gupta.

The vision document was submitted after an angry apex court on July 11 lashed out the state government for its apathy towards the Mughal era monument, considered one of the seven wonders of the world and a major tourist draw.

Advocate Aishwarya Bhati, appearing for the state government, told the bench that they be allowed to file the document.

The court allowed the counsel to file the draft.

The Uttar Pradesh government told the apex court that the entire Taj Mahal precinct should be declared a no-plastic zone and the use of bottled water inside should also be prohibited.

The state government said all polluting industries in region should be closed, while more tourism hubs should be created.

It said a comprehensive traffic management plan was needed to promote pedestrian movement in the Taj heritage precinct.

The draft vision document also said roads along the Yamuna riverfront should be planned so traffic is limited and pedestrian movement encouraged.

According to the government, there should be no construction on the Yamuna floodplain and the riverbank should only have natural plantations.

The apex court has been monitoring development in the area to protect the Taj Mahal, built by Mughal emperor Shah Jahan in the memory of his wife Mumtaz Mahal at Agra in 1643.

During the hearing earlier this month, the bench had drawn a parallel between the Taj Mahal and Paris' Eiffel Tower, saying the mausoleum was perhaps more beautiful, but India continued to lose tourists and foreign exchange due to the situation prevailing there.

The Centre told the apex court that the Indian Institute of Technology, Kanpur, was conducting an assessment of air pollution level in and around the mausoleum and Taj Trapezium Zone (TTZ) and they would give their report within four months.

TTZ is an area of about 10,400 sq km spread over the districts of Agra, Firozabad, Mathura, Hathras and Etah in Uttar Pradesh and Bharatpur district of Rajasthan.

The court had also asked why only four ambient air quality monitoring stations were set up at Agra against the 22 required.

It directed the Centre to file an affidavit giving all details of what has already been done for protection of Taj and what the government intended to do further.

The court had said the affidavit filed by the Centre giving some details of steps taken was "absolutely of no consequence" and it should specify every step in detail, along with a time- frame and responsibility and accountability of the concerned departments.

It had said steps taken by the authorities appear to have a "negative effect" on Taj.

The bench had also said since the matter had been lingering for a long time and no concrete steps were taken to restore the glory of Taj, it would take up the matter on a day-to-day basis from July 31.