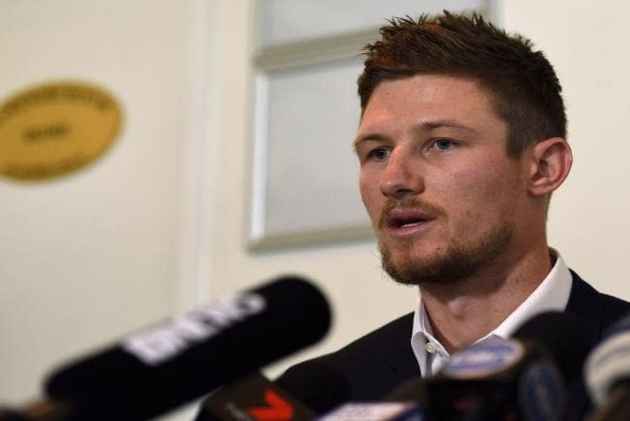 Following the footsteps of former Australian skipper Steve Smith, opener Cameron Bancroft has also decided not to appeal against his nine-month suspension imposed by Cricket Australia (CA) for his involvement in the massive ball-tampering scandal.

Confirming the news, Bancroft took to his Twitter account and said that he decided to accept the sanction levelled by the Cricket Australia, adding that he would do whatever it took to earn back the trust he had lost.

"Today I lodged the paperwork with Cricket Australia and will be accepting the sanction handed down. I would love to put this behind me and will do whatever it takes to earn back the trust of the Australian public. Thank you to all those who have sent messages of support," the 25-year-old, the player who actually tampered with the ball, tweeted.

Earlier in the day, Smith said that though he desperately wanted to play for his country again, he was not going to appeal against his 12-month penalty imposed on him for being part of the `leadership group` in a ball-tampering scandal that took place during the third Test of the recently-concluded four-match series against South Africa.

"I would give anything to have this behind me and be back representing my country. But I meant what I said about taking full responsibility as captain of the team.I won't be challenging the sanctions. They've been imposed by CA to send a strong message and I have accepted them," he tweeted.

Smith, along with former vice-captain David Warner, was barred from all international and domestic cricket for a year, while opening batsman Cameron Bancroft was suspended for nine months for their roles in an attempt to scuff the ball during the third Test in South Africa.

The three erring cricketers were earlier given time till April 11 to decide whether to appeal against the Cricket Australia penalties or not.

Warner is yet to confirm whether he will contest the charges.