After TDP Walks Out Of NDA Over Special Status For Andhra, Nitish Kumar Says Not Given Up Similar Demand For Bihar 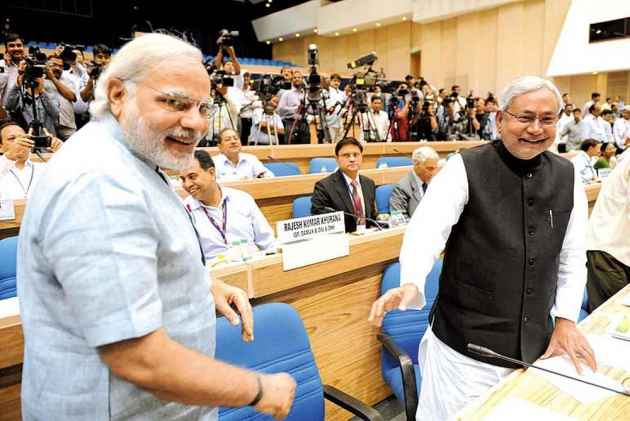 After TDP walked out of NDA over special status for Andhra Pradesh, Bihar Chief Minister Nitish Kumar today said he had not given up a similar demand for Bihar.

He said he hasn't given it up "for even one second" since he first raised the issue 13 years ago.

He also hit out at the RJD for questioning his "silence" after the TDP pulled out of the NDA seeking similar benefits for Andhra Pradesh.

Kumar declined to comment on the fresh conviction of RJD supremo Lalu Prasad in the fourth fodder scam case but said the claims of the former chief minister and his family members of being "framed" in corruption cases "could convince only hardcore supporters".

"I had written to the then prime minister for a special status to Bihar in 2005, shortly after assuming power in the state. A year later, we got a resolution passed in the state assembly to the effect.

"Since then, the demand has been raised by us relentlessly and I have not strayed for even a second. I'm amused to see those who were never concerned about the issue have suddenly started questioning my silence", Kumar told reporters at party headquarters here.

He also indicated that the issue of special status for Bihar would be raised before the 15th Finance Commission.

Kumar, who is the JD(U) national chief, had made a surprise appearance at a press conference convened by state chief Bashishth Narain Singh to announce merger of a breakaway faction of Hindustani Awam Morcha (Secular) founded by former chief minister Jitan Ram Manjhi.

Kumar was responding to queries about the relentless attacks by Lalu Prasad and Leader of Opposition in state Assembly Tejashwi Yadav.

They have been challenging him to speak up on the issue of special status for Bihar in the backdrop of the TDP walking out of the NDA over a similar demand for Andhra Pradesh.

"Special status is a need for Bihar. We will work towards ensuring that it is fulfilled. But we are not going to issue statements about the matter every now and then. We have always placed interests of the voters above their votes, unlike our detractors," he said.

About Prasad's conviction in the Dumka treasury case , Kumar said, "It is a judicial verdict and I have never spoken about a judgement passed by a court of law".

A special CBI court in Ranchi today convicted Lalu Prasad in the fourth case of multi-crore fodder scam related to fradulent withdrawal of Rs 3.13 crore from Dumka treasury in 1990s.

To a query about allegations of political vendetta and that the RJD supremo was being "framed", he said, "When we were sharing power in Bihar, they said the same thing. I had said this could convince only hardcore supporters."

The chief minister also said his government had ensured communal harmony and betterment of all communities and that he strongly believed in "taking all sections of the society along".

He, however, replied in the negative when asked whether he would advise the same to his ally BJP which has often been accused of triggering communal tension. "Every party has to decide its own course of action", he said.

To another query, the JD(U) chief said he did not attach much importance to bypoll results and "had decided to stay away in keeping with our policy not to contest a bypoll necessitated by incumbent's death. We relented following the BJP's demands, though we knew what would be the outcome".

The JD(U) had contested the Jahanabad assembly segment in bypolls, where its candidate lost by a margin of over 35,000 votes.

About the Supreme Court order dismissing a PIL seeking his disqualification from the Legislative council on the ground that he did not disclose his criminal records, he said, "I was not made a party and not even served with a notice".