They saw spirits fall, rise, sink, suspend and soar again, and, in the end, we still had two full days left. If only one of them was saved for Chennai. Or what if we just had November rain? Let's face it, despite all the devils in the pitch, 107 was never really a safe score. The Aussies might lose a few wickets, one thought, but, in the end, they would romp home. Perhaps with a few hiccups.

So the spirits soared when the Aussies were reduced to 58 for 7. Only to sink again when the tail-enders very nearly took them close to the target. Memories of Gillespie's stubborn batting were too recent to not haunt the collective Indian hopes. It was a question of holding one's nerve. India did it.

Yes, it is a cliché, but it was a real nail-biter till the end that the 13-run margin of victory in cold print may not convey. After all, we did dismiss Australia for 93, their lowest ever total in India. So what if the series was already lost?

And since we are past masters at asking what might have been, one may well be allowed to ponder what if rain hadn't played spoilt-sport at Chennai. What if the devil had been kept out of the pitch at Nagpur? Or, more correctly, what if the pitch hadn't become a devil in the minds of the Indians? Or, to be truly perverse, what if all those dubious decisions in the first test hadn't been given? Oh well, as Shri Sidhu would say, if his aunt were a man, she (we think he does mean 'he' in this case) would be his uncle...We would, of course, do well not to ponder such thoughts as what the Australian version of this exercise might be (sample: Considering that Michael Clarke, who is possibly as renowned for his bowling as McGrath is for his batting, returned amazing figures of 6.2-0-9-6, the mind boggles at the question: What if Warne was playing?)

So, well, yes, windbaggery aside, it doesn't matter now. But what matters is to remember that despite batting the way India did in the first innings, it still could come back to win the match. And what a match it was! Saved from utter and total ignominy, in the end, by spirited bowling by all the spinners and before that Laxman and Tendulkar finally coming through with a half century each. Shiv Khera may have plagiarised or settled in court or whatever, but he for sure would be right if were to tell this Indian team: You Can Win! With a little help from the groundsmen, of course. Perhaps we now have cracked how never to lose in India: ensure pitches like this one. Any wonder that Saurav da was upset with the Nagpur disaster? Oh well...

Earlier, the Aussies had found an unlikely bowling hero in Michael Clarke who produced a dream spell of 6.2-0-9-6 with his part-time left arm spin to skittle out India for 205 in their second innings. Leaving them only 107 to win the match. In perspective, this was possible only if we kept them near their lowest ever total before this match -- 105 at Kanpur in the 1959-60 series. That was also India's first ever test win over Australia.

And, yes, as you well know, India did it. 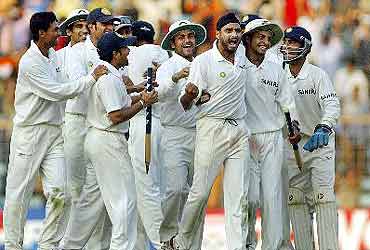 In the end, the Aussies were all bundled out in only 30.5 overs, in under two-and-half hours. And they had a first innings lead of 99 runs. VVS, Sachin, Dravid (who was the highest unbeaten scorer in the first innings, Harbhajan and, after the last series particularly, Kumble are well known to the Aussies. But it was Kartik who made the early inroads into the Australian innings ended with three for 32, including two in one over).

And then the Turbanator moved in for the kill.Harbhajan cut through the middle and bottom order like a hot knife through butter to claim five for 29 on what would appear to be a minefield of a track.Kumble, who was brought on after the visitors had lost their top seven batsmen with only 58 on the board, picked up one wicket to add to his tally of five in the first innings.

The first breakthrough, however, was provided by Zaheer Khan who accounted for Aussie opener Justin Langer cheaply for the second time running in the Test. It was then that the three spinners came into their own, spinning a web that trapped the clueless Australian batsmen on the dusty track where each delivery looked as if it was loaded with explosives.

At one stage it seemed as if the Aussies could be dismissed for their lowest ever Test score (83 all out also came against India, at Melbourne during their 1981-82 series, which was drawn), but their seventh wicket pair of Gillespie (9) and Nathan Huaritz (15) added 20 runs to bring them closer to avoiding that ignominy and then the former, in the company of fellow-fast bowler Michael Kasprowicz (7) not only made sure of crossing that total but also brought them agonisingly close to a victory by adding 15 runs for the ninth wicket.

It was fitting that the two men who had haunted the Aussies in the last series in India were involved in the last crucial wicket that could have swung the match either way. Harbhajan brought the crowd of 35,000 on its feet in the extended final session by having last man Glenn McGrath caught at slip by Laxman.

It would be unfair to not talk a bit about Sachin and Laxman's contribution today. India were 14 for 2 when Tendulkar walked in to join Laxman, and we all may well have been forgiven for thinking it was a nth replay of the nightmare of the last few innings.

There is something about batting at number three that seems to suit VVS. The promotion to his favourite slot seemed to have done wonders to his confidence, as he was on the ball from the moment he arrived at the crease. McGrath was firing on all cylinders, having accounted for both Gautam Gambhir and Virender Sehwag, but VVS responded with silken smooth drives on both sides of the wicket that skeptics had begun predicting could only be seen from past footage. Three fours in an over off McGrath, including a slash above the slips, would certainly have made the Aussies feel that they had perhaps unwittingly time-travelled to their worst nightmare.

Bombay boy Tendulkar at the other end showed no signs of the elbow trouble that had kept him away from the game for nearly three months before his return in Nagpur last week. If any thing, the little master played some of the attacking shots that had not been witnessed in the past few months.

After forcing McGrath and Gillespie out of the attack with his trademark wristy on-drives, the 31-year-old Tendulkar turned his attention to the debutant offspinner Hauritz. Hauritz, who had taken three wickets in the first innings, was welcomed with two fours and a six in the second over. But thankfully for the Aussies, or so they would have then thought, when Sachin fell to the same bowler six overs later -- he swept him uppishly and Clarke brought off a fine catch by running at backward of square leg. Laxman (69) was not to hang around too long either but he together with Sachin (55) had strung together an invaluable stand of 91 runs to not only rescue India from a precarious 14 for 2 but also put them on the path to the fabulous victory.

Will this victory do to the team's morale what the washed out Chennai test could have? Is the bear run over? Are our overall fundamentals strong enough? Yes, after some minor corrections, we seem all set for a rally. It's okay to be bullish on Team India once again. All we need is Saurav da to come back all guns firing.

with inputs from PTI