Ahead of Rajasthan Assembly Polls, Kirodi Lal Meena Joins BJP Along With 2 MLAs

The development will strengthen the ruling party, particularly in eastern and parts of southern Rajasthan where the leader has a significant hold in constituencies dominated by the Meena community. 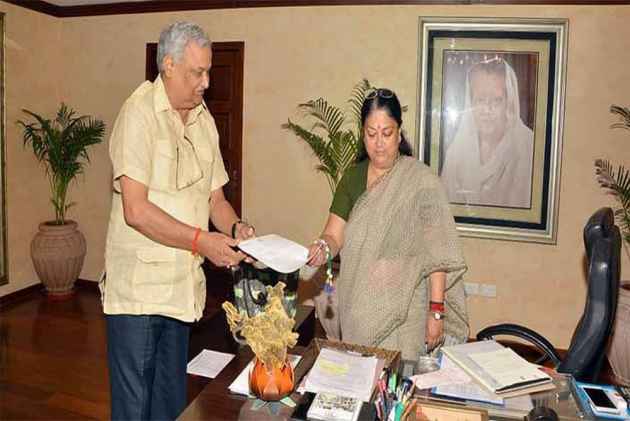 In a significant political development ahead of the state elections in Rajasthan slated for later his year, NPP's state chief and MLA Kirodi Lal Meena, who had left the BJP in 2008, rejoined the saffron party on Sunday.

Meena, a five-time legislator, along with and two other NPP MLAs, Golma Devi and Geeta Verma, joined the ruling party at a ceremony in BJP headquarters in Jaipur in presence of chief minister Vasundhra Raje and other leaders.

The development will strengthen the ruling party, particularly in eastern and parts of southern Rajasthan where the leader has a significant hold in constituencies dominated by the Meena community.

BJP state president Ashok Parnami said Meena has given a letter to merge with BJP the NPP's state unit with two third majority of his MLAs.

The NPP had four MLAs in the House of 200, but the fourth legislator, Navin Pilania, has not joined the party and kept away from the development.

"I am very happy today to return to the old home unconditionally. It is as if my 'vanvas' (exile) has come to an end.

"My background is of RSS ideology. After having worked for the RSS, I joined the BJP and never looked back. Today, I joined the BJP again with no condition," Meena said in his address to the BJP leaders and workers after joining the party.

Asked about Pilania not joining the BJP, Meena said, "It is his wish."

Meena said that he would tour the state, meet party workers and stop the Congress from coming to power after the Assembly elections.

Hitting out at the Congress, the tribal leader said former chief minister Ashok Gehlot had targeted him during an agitation in Udaipur, but Chief Minister Raje was never offended by his agitations.

Meena said that he has led 380 agitations in the state and 103 "politically motivated" cases were registered against him.

The 66-year-old leader said that he committed mistakes and got separated from the BJP 10 years back but he never left the party ideology.

Meena told reporters that he had discussed with independent MLA and former BJP leader Hanuman Beniwal before joining the party.

"Beniwal was positive about this development," he said.

BJP's state president said, "The party's central leadership gave a nod for the merger after which the joining took place. Meena has not changed his ideology and this is the big thing. We want to expand the party and this will help us in expanding our base."

Last night, Kirodi Lal Meena, who is seen as the patriarch of the Meena community, held a meeting with state Water Resources Minister Rampratap at the latter's residence in presence of Transport Minister Yunus Khan and Agriculture Minister Prabhu Lal Saini.

Kirodi Lal Meena (66) had left the BJP in 2008. In that year's Assembly elections he got elected as Independent candidate. His wife Golma Devi also won in the polls as Independent and became a minister of state in the then Ashok Gehlot government.

In the 2009 Lok Sabha polls, Meena got elected as Independent candidate. In 2013, he joined the NPP and became its state convener. The party won four seats in 2013-Assembly elections.

Of the 200 Assembly constituencies in Rajasthan, there are more than 40 seats mostly in eastern and southern parts of the state which are dominated by the Meena community.