By a November 24 order, Justice N Seshasayee had quashed all the orders passed from 2017, which culminated in the taking over of the property in 2020, besides chiding the previous government for its action relating to the sprawling property located at the posh Poes Garden. 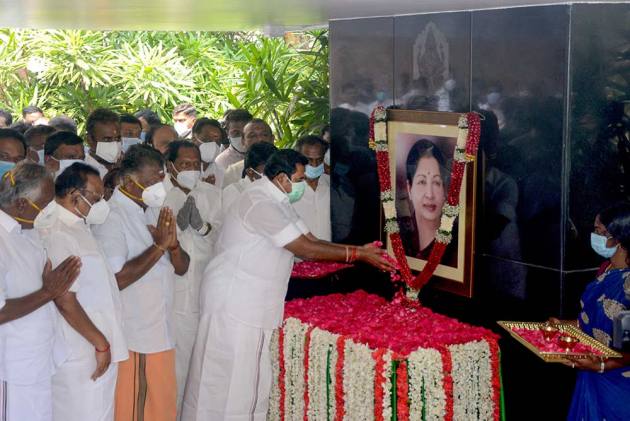 On Wednesday, the AIADMK moved the Madras High Court with an appeal challenging the ruling of a single judge quashing all the orders of its led previous government to take over late Chief Minister J Jayalalitha's residence here, for establishing a memorial for the leader.

By a November 24 order, Justice N Seshasayee had quashed all the orders passed from 2017, which culminated in the taking over of the property in 2020, besides chiding the previous government for its action relating to the sprawling property located at the posh Poes Garden.

In its present appeal, former Law Minister and Villupuram district secretary of the AIADMK, C Ve Shanmugham submitted that the single judge order is erroneous and contrary to the settled proposition of law. The order attributing mala fides is highly uncalled for and the same ought to be expunged.

A mere reading of the whole judgment would manifest that the same has been biased by several factors, for which no evidence or pleadings was available before the court. Making remarks on the Legislature's competency to enact the Act and Ordinance relating to the Puratchi Thalaivi Dr. J. Jayalalitha Memorial Foundation Act when the same was not even under challenge before the court, was erroneous, the appeal claimed.

When there is no lapse in the procedure followed by the state for acquiring the land and when ample opportunity had been granted to the interested persons to raise their objections during the enquiry conducted by the Land Acquisition officer and when an award was passed by the competent authority, the only recourse for the writ petitioners was to file an application under Section 64 of the 'The Right To Fair Compensation And Transparency In Land Acquisition, Rehabilitation And Resettlement Act, 2013' before the District Collector for reference before the competent authority constituted under the Act, he said.

Hence, when there is an effective alternative remedy, the judge ought not to have entertained the Writ Petitions challenging the award passed by the Land Acquisition officer. The judge had failed to see that both the Writ Petitioners claimed their right to the estate of the late Chief Minister J Jayalaitha only based on the Letters of Administration granted by this court in a civil suit.

The grant of letters of administration was limited and the said order had become final and the writ petitioners failed to challenge the same. In the absence of challenge to the same, the petitioners could not have challenged the acquisition proceedings initiated against the estate of Jayalaithaa.

Once a division bench under Testamentary Jurisdiction had passed an order directing the State to consider its suggestions and when the same being considered by the government and when acquisition proceedings passed, the same is binding on the single judge and the same ought not to have interfered by him, the petitioner submitted.

Last week, the court had quashed the orders, from 2017 to 2020, while allowing a batch of three writ petitions and about 15 miscellaneous petitions with various related prayers filed by J Deepa and J Deepak, the niece and nephew, respectively, of the late AIADMK supremo.