The submission termed the CBI's move to summon him for questioning in the Aircel Maxis matter "illegal and mala fide" and a bid to harass him and his family. 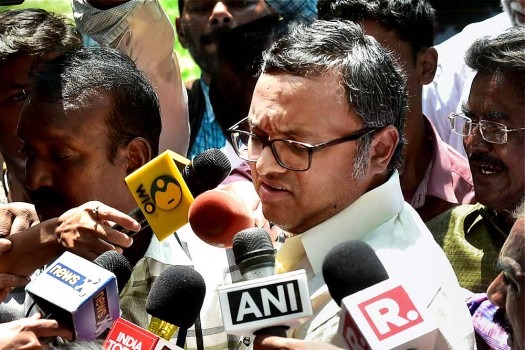 Karti Chidambaram, son of former Finance Minister P Chidambaram, has approached the Supreme Court on the issue of a summons issued to him by the CBI in the Aircel Maxis case.

Karti, who was asked by the CBI to appear for questioning in the matter today, sent a five-page submission through his lawyer asking the agency not to insist on his appearance in the matter.

The submission termed the CBI's move to summon him for questioning in the Aircel Maxis matter "illegal and mala fide" and a bid to harass him and his family.

"My client has filed a writ petition under Article 32 of the Constitution of India before the Supreme Court challenging the action of the CBI in issuing summons to my client in the charge sheet in RC no 22(a)/2011-DLI," the submission said.

It said in connection with the matter of Aircel Maxis and INX media, P Chidambaram had filed an affidavit before the Supreme Court on September 29.

Karti and his father were questioned by the agency on November 19 and December 6 of 2014, respectively, it said.

"The CBI and other investigative wings under the control of this present Union government, from time to time, issue malicious press releases or take coercive action driven by political vendetta in order to blatantly sensationalise and publicise this campaign against my client and his family with the intent to malign their reputation," it said.

The lawyer reiterated all proceedings connected with the matter had been terminated. Since all the accused in the case had been discharged, the CBI should not have issued its notice.

It also said this "malicious campaign" against Karti Chidambaram and his family was an orchestrated attempt to malign his reputation and of his father, who, it added, was a prominent leader of the largest opposition party.

After Karti had refused to appear on the last date in September, the CBI had strongly contradicted his claims and said only four of the eight charge sheeted accused were discharged by the special court. The agency had filed an appeal against the order in the Delhi High Court in May this year.

"FIR RC-22(A)/2011-DLI has not been quashed by the court and further investigation under 173(8) of the CrPC is continuing," CBI Spokesperson Abhishek Dayal had said.

He had said two Malaysian nationals and two Malaysian companies who were charge sheeted by the CBI in the matter did not appear before the special court and warrants were issued against the individuals.

"Court proceedings are still pending. A request has been placed before the Interpol for issuance of Red Notices against the two Malaysian nationals," Dayal said.

The investigation into alleged irregularities in granting a foreign investment approval to Global Communication Services Holdings Ltd for investment in Aircel is still going on, CBI sources said.

They said the agency was also looking into investments made by firms controlled by Karti into Aircel while the FIPB clearance issue was under the consideration of the then Finance ministry.

In an order on February 2 this year, the special CBI court had discharged Dayanidhi and Kalanithi, Sun Direct TV Pvt Ltd and South Asia Entertainment Holding Ltd saying that the charges were without any "legal basis".

The court order, however, did not have any effect on the two accused Malaysian nationals-- Marshall and Krishnan--in the CBI's case as the court had already segregated the proceedings against them from that of the Maran brothers and others. Both had not appeared before the court.

The CBI had challenged the discharge order in the Delhi High Court on May 11 this year.

P Chidambaram, in a statement in 2014, had dismissed the allegations against him saying the Foreign Investment Promotion Board (FIPB) clearance was granted in due course.