Addressing a press conference here on Monday, advocate Vishvanath Chaturvedi alleged that Akhilesh Yadav, his brother Prateek and people close to him were in touch with mafia Chhota Shakeel. 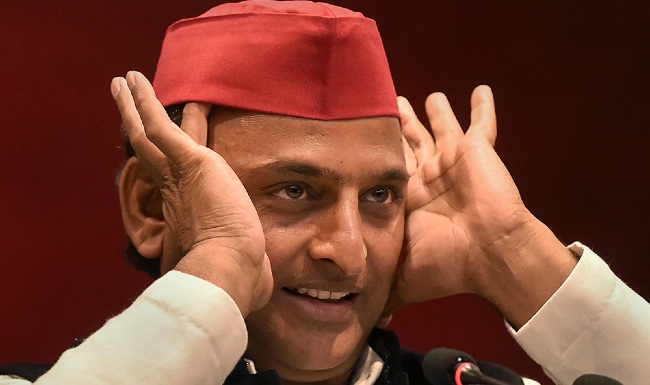 An advocate has accused Samajwadi Party chief Akhilesh Yadav, his brother Prateek and other close aides of launching bogus companies, and carrying out transactions worth crores of rupees.

The Samajwadi Party has refuted the charges, saying these were "sponsored" by the BJP.

Chaturvedi said in the Samajwadi Party government, there are proofs that "benami" properties were bought using 16 bogus companies and there were transactions worth crores of rupees. Details regarding this were given to the Income Tax Department a year ago but no action has been taken so far, he said.

Chaturvedi said 16 companies were registered on one address and a mobile number, and there are details about their transactions in crores. He urged the prime minister to initiate stringent action in this regard.

He alleged that Piscesia Power Transmission Pvt Ltd and Monal Infraproject prospered when Akhilesh Yadav was the chief minister and they also transacted business with Chhota Shakeel in Dubai.

Meanwhile, SP's chief spokesperson Rajendra Chaudhary said the allegations levelled by Chaturvedi are "sponsored" by the BJP. He added that the ruling party is completely aware that it is going to face defeat in the upcoming UP Assembly elections, hence it is defaming the SP chief and people who are close to him.

Chaudhary said Chaturvedi's sudden appearance in the media and giving statements when elections are near raises doubts. Chaturvedi, who had filed a disproportionate assets case against Samajwadi Party founder Mulayam Singh Yadav and his son Akhilesh Yadav, on Wednesday put the central government also in the dock for not sending the duo to jail.

"If the government really wants to take action against the corrupt, then it should be taken against the entire Mulayam Singh Yadav family instead of raiding places of their close ones," Chaturvedi had said at a press conference here.

He was alluding to income tax raids recently on a senior SP leader and three others, allegedly close associates of Akhilesh Yadav.