Akhilesh hits back at Shah, calls his remarks 'childish, immature'

In a tweet in Hindi, Akhilesh Yadav said, "At a time, when Uttar Pradesh and the country is going through hunger, unemployment, inflation and mismanagement, BJP leaders are engaged in joining ABCD and alphabets, and making childish and immature words." 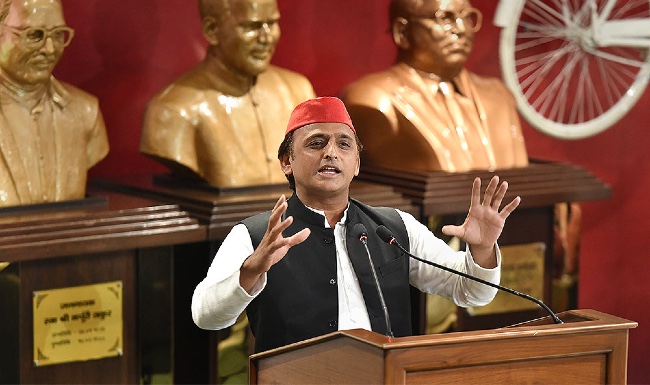 Apparently hitting back at Union Home Minister Amit Shah, Samajwadi Party chief Akhilesh Yadav on Thursday mockingly called the remarks made by the leader recently as "childish and immature".

"These words neither fill the stomach of people nor help in running the house," he said. "In 2022, the public will take them to the end (of the Hindi alphabets) (22 mein jantaa inkaa 'ksh', 'tr', 'gy' kar degi)," Akhilesh said.

'Ksh', 'tr', 'gy' are the three last alphabets of Hindi. The tweet of Akhilesh came after Shah on Thursday unleashed his new vocabulary of 'NIZAM' and 'LAB', while launching a scathing attack on his political rivals in the state, and also used 3'P's to make a scathing attack on the Samajwadi Party ahead of the 2022 UP Assembly elections.

"In the NIZAM of Bua-Babua-Bahan, N stands for Naseemuddin (Siddiqui), I stands for Imran Masood, ZA stands for Azam Khan and M stands for Mukhtar Ansari. Their 'nizam' is a symbol of corruption, crime and hooliganism," Shah said while addressing Jan Vishvas Yatras in Moradabad, Aligarh and Unnao."

"SP, BSP and the Congress have given a new LAB to Uttar Pradesh. It means L for Loot, A for 'Aatankvaad' (terrorism) and B for 'Bhrashtaachaar' (corruption). These parties have looted the state, and have worked to fill the sacs of perfume traders," Shah said.

Attacking the SP, the Union minister said, "The identity of the SP government is 3Ps--'parivaarvaad' (dynastic politics), 'pakshpaat' (bias) and 'palayan' (exodus). The identity of the BJP is 3Vs--'vikaas' (development), 'vyapaar' (trade) and 'saanskritik viraasat' (cultural heritage)."