Samajwadi Party supremo Akhilesh Yadav also criticised the saffron party over rising prices of petrol and diesel across the country. 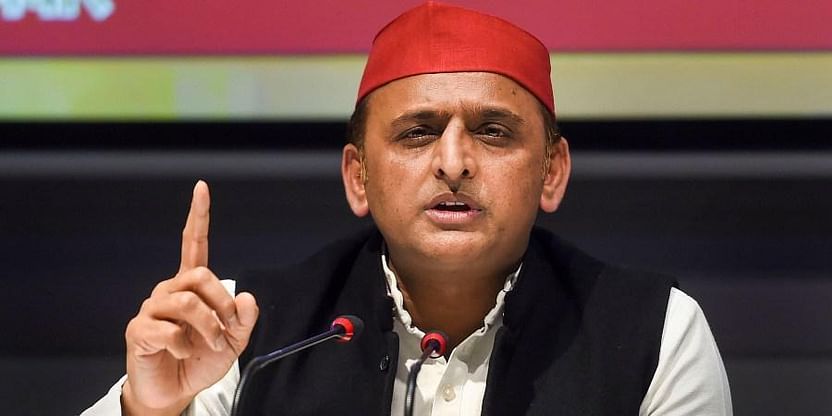 Yadav's response came a day after Shah's speech in Azamgarh where he termed the Samajwadi Party (SP) as a party that stands for "Jinnah, Azam Khan and Mukhtar (Ansari)", giving it the acronym 'JAM'.

Prime Minister Narendra Modi has in past used 'JAM' as a shorthand to publicise his vision of getting a 'Jan Dhan Bank account, Aadhaar card and mobile phone' to every person in the country.

"For BJP, 'J' stands for 'Jhooth' (lies), 'A' stands for 'Ahankaar' (arrogance), and 'M' stands for 'Mahangaai' (inflation)," the SP chief said addressing a press conference in Kushinagar.

He also criticised the saffron party over rising prices of petrol and diesel across the country, adding that the party is pandering to the poor only because election is around the corner in Uttar Pradesh.

"If the BJP stays in power, it (fuel price) will touch Rs 150. They are not increasing the price as election is round the corner," he said.

"The poor are being given food grains only till the elections. They (BJP) are saying that it has been extended from Holi to Diwali," he said, adding that if his party comes to power, food will be available round the year.

The war of words between the two popular political parties has intensified as the election in the political heartland of the country nears.

Addressing a rally in the SP bastion of Azamgarh on Saturday, Shah had said while Modi strived to give a "corruption-free" government, SP was inducting in its fold people like Mukhtar Ansari, a don-turned-politician.

He had also attacked the SP chief for naming Muhammad Ali Jinnah, the founder of Pakistan among freedom fighters like Mahatama Gandhi, Jawaharlal Nehru and Sardar Vallabh Bhai Patel.

"There are so many people from the minority community here. Is there anyone here who sees greatness in Jinnah?" Shah had asked.

In an address in Hardoi on October 31, Akhilesh had kicked up a controversy when he said Jinnah got his barristership from the same place as did Mahatma Gandhi, Sardar Vallabh Bhai Patel, and Jawaharlal Nehru.

At the press meet at Kushinagar, the SP president said his party was giving tickets to winnable women candidates, while the Congress was giving the same to women who are likely to lose.

Congress general secretary Priyanka Gandhi Vadra had recently announced that her party would give 40 per cent of tickets to women in the upcoming state polls.

Taking a jibe at UP Chief Minister Yogi Adityanath without taking his name, the SP chief said, "We are backward (castes), but are advanced as far as our thought process is concerned. But, he is backward both in terms of work and thought process. Hence, change will definitely take place, and it is bound to take place."

He also demanded that the Centre’s three new farm laws be withdrawn.

Referring to the Lakhimpur Kheri violence in which eight people, including four farmers, died, the SP leader alleged that the BJP harasses farmers.

He also said that injustice is being done to party leader Azam Khan by the BJP government.

He also accused the BJP of not fulfilling its poll promises, and said the party in the past four years have not seen their 'sankalp patra' (election manifesto).