Comparisons to the "Hand of God" goal Argentina great Diego Maradona scored against England in 1986 came naturally to Russians enraptured by the unlikely performance of their team. 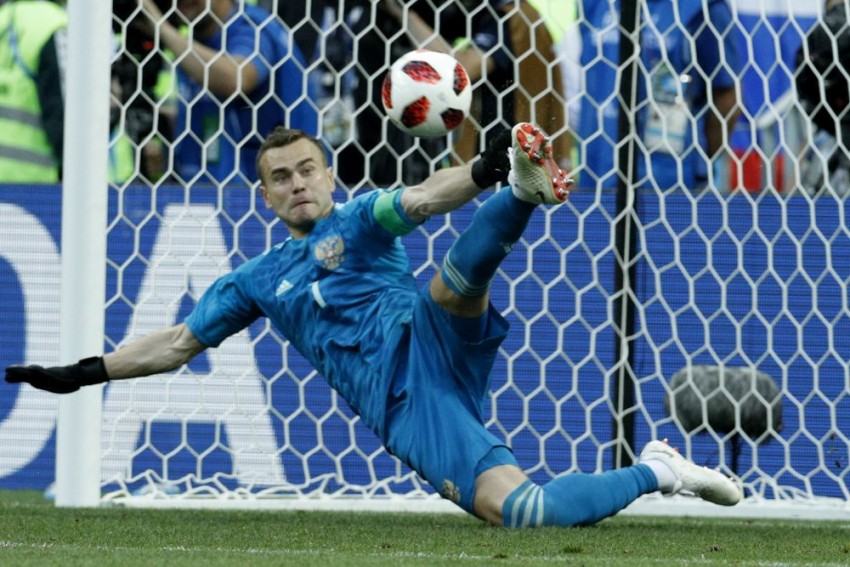 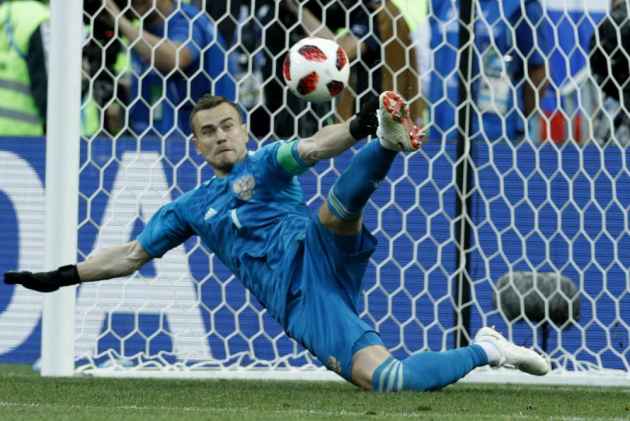 The World Cup joke around Russia is that goalkeeper Igor Akinfeev has the "Foot of God".

Comparisons to the "Hand of God" goal Argentina great Diego Maradona scored against England in 1986 came naturally to Russians enraptured by the unlikely performance of their team.

Akinfeev had already won admiration for stopping two Spain penalties that sent the 2010 champions packing and Russia through to their first World Cup quarter-final since 1970.

But his winning left-foot save against Spain's Iago Aspas has some in the host nation thinking of the 32-year-old in even more reverential terms.

"Akinfeev himself is a god," said his childhood coach Pavel Koval. "I think Igor is better than (Spain 'keeper David) de Gea."

This level of exuberance is relatively new terrain for a solid player with his share of bad luck.

During the 2014 World Cup Akinfeev palmed a soft shot in Russia's opener against South Korea that somehow arched in over his head.

The Russians came back to draw the game but looked miserable walking off the pitch. They were eliminated two games later from what may have been one of the easiest groups in the draw.

Akinfeev's personal misfortune came when he suffered a knee injury while negotiating a lucrative move from CSKA Moscow to England's Premier League a decade ago.

The deal fell through and the Red Army club captain ended up spending his career in the relative anonymity of the domestic league -- one of the modern game's rare one-team stars.

Akinfeev will get his chance to shine before an even bigger audience when he pulls on his gloves on Saturday in Russia's most important match in generations.

A win against Croatia in Sochi would put Russia in the semi-final of a World Cup for only the second time since the Soviets did it in England in 1966.

That team was led by Lev Yashin -- one of history's greatest goalkeepers with whom Akinfeev is occasionally compared.

Yashin features on the retro poster Russia prepared for its first home World Cup. There is some symmetry there as well.

Russia's central bank created a stir by pointing out that a 100-ruble note commemorating the World Cup it issued in May also shows a 'keeper making a save with his left foot'.

The hologram image is tiny and remained unnoticed by most. Officials later said it had not necessarily been meant to resemble Akinfeev.

The mystique that surrounded Yashin and his later Soviet successor Rinat Dasayev -- their cult status propagated by the Communist Party -- is yet to catch up with Russia's current No. 1.

But Akinfeev's 110 appearances for his country are more than those of either Yashin or Dasayev and his longevity alone draws comparison to the two.

"I witnessed three great eras. There was the Yashin era, the Dasayev one, and now the Akinfeev one," said his former coach Koval.

Akinfeev "has been playing (with the national team) for nearly 15 years and people will remember him for a long time -- not just two or three generations.