Alice Munro And Me

Last week when Alice Munro won the Nobel Prize, it was more than just a writer I admire winning the prize. 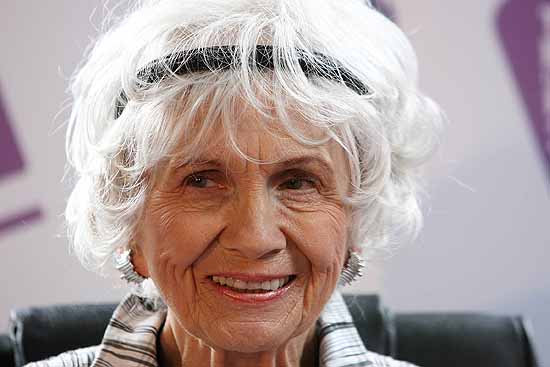 While I was an intern in the Fiction Department of The New Yorker, I was given a handwritten Alice Munro story to type out. Last week she won the Nobel Prize in literature and I felt like a small little part of something big. In the spring of 2012, every Monday, I would be in the office of The New Yorker at 4 Times Square from 10AM to 6PM. Most of the time, my job was to read the heaps of unsolicited fiction manuscripts that the magazine receives every day. But one day, my supervisor— I was supposed to call him a mentor but our interaction was too limited for a mentorship of any sort— a handsome, young, bespectacled word nerd, handed me a stack of scribbled notes and told me to type them up. But there was one problem— the pages were, somehow, mirrored reflections of the originals. “I don’t know. See if you can find a way to decipher it,” was all he said. So I ended up spending that afternoon with my small compact mirror held up to Alice Munro’s words.

My internship had its pros and cons. Like everyone who works there, I grew up reading the magazine and still love the feel of it in my hands when I get home every Tuesday evening. These days, with my schedule getting busier, I have a stack of them lying on my bedside table and I stare at them guiltily every day. I feel like a mother neglecting her toddlers— granted I’m nowhere near knowing what motherhood feels like so this may well be offensive to mothers or The New Yorker.

My own mother also loves the magazine. In fact, it is thanks to her that I became a reader and then a writer. So when she was visiting New York City that spring, I had to take her to the office. My mother, thrilled, marched around and poked her head into rooms with the confidence that only comes after you turn 60. She loudly told my supervisor her thoughts on the last few issues. She went into the library and picked up old issues of the magazine while looking through the paraphernalia of past years. In the elevator down to the famous Condé Nast cafeteria on the 4th floor, she confidently said to David Denby, “I enjoy your reviews. We’re thinking of watching Footnote tonight. Would you recommend it?” He did, and we watched it, and we loved it. In that one brief lunch hour, my mother did everything I had wanted to do at The New Yorker.

My experience was more guarded. The stakes are high at a magazine like that so the place functions as a corporate office. There are cubicles— even in the cartoon department— and the senior editors all have lovely offices around the edges of the floor that overlook Times Square. The younger editors and the interns sit in little quads scattered around each department. On my Mondays, I sat in the cubicle near Roger Angell but the entire semester I was too afraid to do anything more than smile at him when he walked past me.

My interaction with the rest of the department was also rather limited. The fiction department printer sits on the intern desk for some reason. This means that I only got to see the fiction editors when they came to collect printouts. Being readers and writers, we’re all as awkward as each other so, more often than not, when something got printed, I’d only see a hand coming around from the other side of my cubicle wall to feel around for the papers to quickly snatch.

I didn’t mind that lack of interaction. On the few occasions that one of them did need to come and shuffle through the printouts in order to find what they needed, they would make enough of a noise to announce themselves before they got in my computer’s line of vision so that I could take a few seconds to close my personal email and whatever other obviously non work-related pages I had open. If I had twitter open, I had mastered a way to reach the magazine’s twitter page within seconds.

I enjoyed my Mondays at The New Yorker. The Condé Nast building has a fascinating culture— in addition to The New Yorker, it houses Vogue, GQ, GolfWorld, Architectural Digest, Vanity Fair, and other magazines. To have all those leading publications under one roof in New York City means a building filled with very interesting, very intelligent and, often, very attractive people. Long-legged models in unreasonably high heels would be signing in at the front desk as I proudly swiped past to go up to the 20th floor. In the elevators and the cafeteria, I made a game of trying to guess who belonged to which magazine.

The work was interesting but not wildly stimulating. I read dozens of unsolicited fiction manuscripts every week. Some of the submissions were terrible, some were terrific. Most of the cover letters were dull, some were entertaining. One woman, in her cover letter, said that she had done a reading of her submission and “many people clapped.” I didn’t pass her on to my supervisor. But the pride of being at The New Yorker was enough to motivate me. As an aspiring writer, it isn’t easy to find a sense of community or belonging. Most of my hours are spent alone at a desk with my laptop, but being even a small part of such a remarkable magazine gave me the feeling that with hard work and concentration, I could someday carve a space for myself.

After I finished my internship, I read The Receptionist by Janet Groth. Groth worked as a receptionist at The New Yorker in the 1950s and ‘60s and this book is her tell-all. I hadn’t heard of most of the people she writes about but that didn’t stop me from devouring all the salacious details and enjoying it the same way I enjoy a lazy afternoon of gossip with my aunts in Calcutta.

There has been a lot of talk and criticism of internships recently and The New Yorker itself redesigned its entire program. I understand the risks of unpaid labour but I’m glad I had the opportunity to intern there while the program still existed (and I actually got a decent stipend). My whole career is a risk at this point but being allowed to see and feel a part of The New Yorker gave me support. So last week when Alice Munro won the Nobel Prize, it was more than just a writer I admire winning the prize. For me, I was involved. My name may mean nothing to David Remnick and I may never have worked up the courage to tell Roger Angell how much I loved his recent Personal History essay in the magazine but knowing I once shared space with these people will keep me writing on days when I’m struggling.