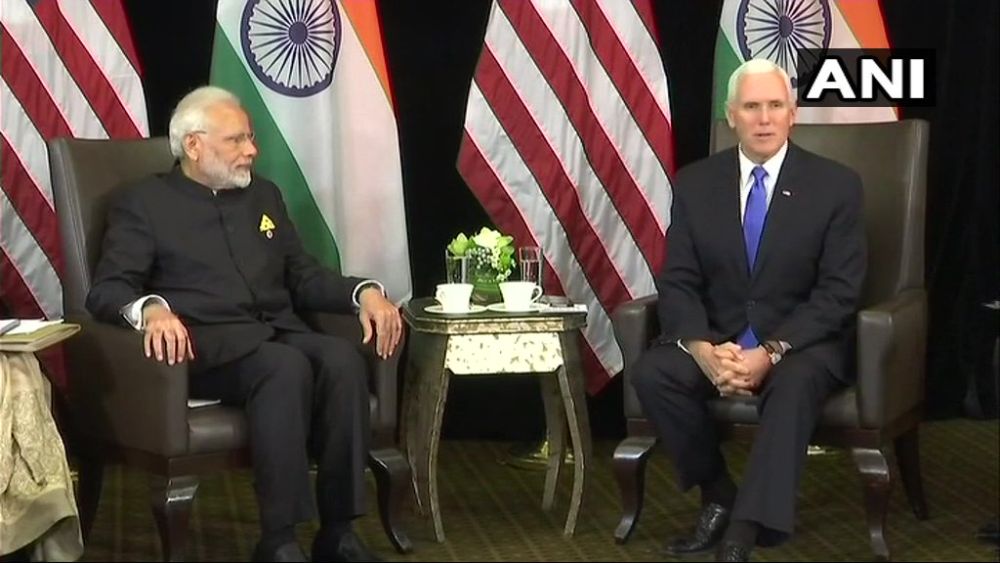 Prime Minister Narendra Modi on Wednesday told US Vice President Mike Pence that all the traces and all the leads in the global terror attacks ultimately leads to a "single source and single place of origin", in an apparent reference to Pakistan.

Modi, who held talks with Pence on a wide range of bilateral and global issues of mutual interests on the sidelines of the East Asia Summit, also expressed concern over the participation of terrorists in the elections in Pakistan.

Briefing the reporters after the meeting, Foreign Secretary Vijay Gokhale said there was some discussion on the issue of terrorism. Pence referred to the upcoming 10th anniversary of the deadly Mumbai terror attack on November 26 and hailed cooperation between the two sides on counter terrorism, Gokhale said.

India A Nation Of Diverse Challenges, Our Solutions Must Also Be Diverse: PM Modi In Singapore

Some 166 people were killed in the attack carried out by Pakistan-based 10 Lashkar-e-Taiba terrorists. Nine of the attackers were killed by police while lone survivor Ajmal Kasab was caught and hanged after handed down death sentence by an Indian court.

Modi thanked Pence for his words and reminded him that in one way or another all the traces and all the leads in the global terror attacks ultimately leads to a "single source and single place of origin", without naming any country or organisation.

He was apparently referring to Pakistan.

Glimpses from the Singapore Fintech Festival, including the visit to the India Pavilion. pic.twitter.com/UMS8jkMDxN

A number of terrorist attacks across the world have been carried out by people of Pakistani origin. On December 2, 2015, 14 people were killed in a mass shooting by a Pakistani origin married couple in San Bernardino, California.

Honoured to deliver the keynote address at the Singapore Fintech Festival. Watch my speech. https://t.co/HtlY1xmjLP

A Pakistani-origin man was among three knife-wielding militants responsible for carrying out the brutal terror attack in London that killed seven people and injured 49 in June 2017.

"He (Modi) did point out that the mainstreaming of people involved in the Mumbai attacks in a political process which has taken place in the recent elections in Pakistan should be a matter of serious concern not just to the two countries - India and US - but to international community," Gokhale said.

Some of the dreaded Pakistani militant leaders, accused of spreading religious hatred and instigating sectarian violence, were among hundreds of candidates in the July 25 elections.

Another extremist outfit Ahle Sunnat Wal Jamaat (ASWJ), which was banned in Pakistan till early this year, had also fielded dozens of candidates including those who are on Pakistan's terrorism watch list.

"There was some good understanding of the areas of how we move forward in building cooperation on counter terrorism and both countries recognised that this is a challenge which we have to fight together and to fight along with the rest of the international community," Gokhale said.