And now a protest and bandh in Tiruchengode, in Western Tamil Nadu, against a 2010 novel, set a century back, about consensual sex outside of marriage 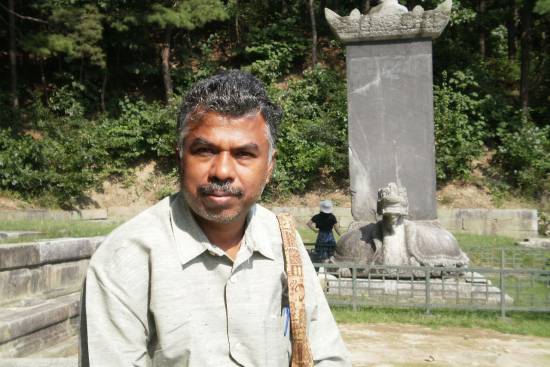 Kali and Ponna’s effort to conceive a child have been in vain. Hounded by the taunts and insinuations of others, all their hopes come to converge on the chariot festival in the temples of Ardhanareeswara—the half-female god. Everything hinges on the one night when rules are relaxed and consensual union between any man and woman is sanctioned. This night could end the couple’s suffering and humiliation. But it will also put their marriage to the ultimate test.

—from the jacket of One Part Woman

Mathorubhagan, which is also one of the many names of Shiva, was published in 2010 in Tamil. At the Chennai Book Fair held in 2011, 500 copies of the book were lapped up eagerly. The English translation, One Part Woman, by publisher Penguin came out in 2013 and author Perumal Murugan’s fans breached the language barrier.

Critics warmed up to the author’s gentle observations on a childless couple under pressure from the community at large to have a child—a novel set in the town of Thiruchengode a 100 years ago. But suddenly things took a curious turn towards the end of 2014, when copies of the book were burnt and the author started receiving threats.

Perumal Murugan is wary of responding to numbers he cannot recognize on his phone. He has even offered to change the name of the town to Karatoor—a fictional town.

But come Friday, January 9, district Tiruchengode, in Western Tamil Nadu, where Murugan lives, will observe a bandh call given by the Girivala Sangam, an organization associated with the management of the Ardhanarishwara (Shiva’s many names) temple. This is where the story of consensual sex outside of marriage, which appeared to have been a custom sanctified by religion in some communities, is situated in the book. It is this that has apparently had the RSS and other caste communities protesting.

The author and his Tamil publisher Kalachavidu are clueless but say intolerance to free speech displayed by the RSS—the cultural big brother of the BJP, which gave the call to burn the book— has now acquired caste dimensions.

While the RSS claimed that Murugan has made fun of Hindu sentiments, caste organizations led by the dominant Gounder caste, to which Mr Murugan also belongs, in the district appear uncomfortable with the attention to long-forgotten customs and practices in the community.

In the din, the gentle observations of the author on the trials of rural folk have been lost. One of Murugan’s better selling novels, Mathorubhagan is in its fourth re-print.  In an article in the Caravan magazine, author N. Kalyan Raman, writes, “Some critics have seen shades of ethnography in Murugan’s work. However, unlike in ethnography, which often functions like Medusa’s head, freezing the community in a set of unchanging customs and practices, Murugan uses the details imaginatively to bring the terrain and people alive, giving them dignity and legitimacy. Through close descriptions of the wealth of knowledge and skills in a farming community, the reader also becomes intimately familiar with the community’s inner life and the challenges that confront it continually.”

Murugan says that notices with extracts from his novel have been distributed in the district and the chorus for a ban and boycott has only become shrill. The 16-page pamphlets being distributed in households in Tirchengode shows evidence of the campaign being backed by an organization.

Once again, India’s tenuous connection with free speech is on display manifesting in calls for burning and banning literature deemed offensive by the self-appointed custodians of faith. Early last year, big publishers like Penguin pulped their books, following calls from fringe elements for a ban years after they were published.

Murugan, who teaches Tamil at the Government Arts College in Namakkal, adds: “I hear the protesters are planning to write to the college administration. So far, they have not asked for any explanation.”

“The controversy revolves around caste and religion now. In the present political context all majoritarian groups feel emboldened. Many fascist groups in the nation desire to suppress free thought and expression. Thiruchengode has become a laboratory. What happens here will affect writers across the nation,” says Kannan.

While a bunch of RSS support on December 26 burnt copies of the book, they appear to have backed off under pressure and have denied their involvement. But as Kannan says, their cadre continue to be the foot soldiers at the local level. “I see it as attempt to garner influence by pandering to casteist and religious bigotry.  By applying the same scale as the bigots one will have to consider banning the two great epics for maligning Hindu women, Tagore for his anti national thoughts like Critique of Nationalism, Sangam literature for portraying many 'immoral' acts and almost all the works of the icons of 20th century modernist writing. Our tradition and life itself has become embarrassing for the middle class. How can literature survive?” he asks.

The state government has, so far, not reacted to the protests. Come Friday, January 9, whether Tiruchengode pays heed to the bandh call or not, the irony of it all stares at the protestors. Thiruchegode is not far from the birthplace of E.V. Ramaswamy Naicker—the smasher of idols who questioned faith and its practitioners. “What can I say? Modi is from Gandhi's land and Varun Gandhi is Nehru's great grandson,” says Kannan.

As we get ready to upload this piece, another book, Communalism and Sexual Violence: Ahmedabad Since 1969, by historian Megha Kumar, faces an uncertain future after publishers Orient Blackswan withdrew it under pressure, promising to review it at later date.

Yes, indeed. What can  say?

At the peak of the celebration, all rules were relaxed. The night bore witness to that. Any consenting man and woman could have sex. In the narrow lanes, on the field around the village, in the rest stops on the hill, and on the open surfaces of the rocks, bodies lay casually intertwined. Darkness cast a mask on every face.

To avoid thinking about Kali, she turned to look at the face of whoever had grabbed her arm. He was ready with a smile. He was young, but the smile was not the kind that showed an interest for the experience. He was no god. Her mother had said every man was a god that night