In a remark that is both extraordinarily callous and obtuse, Nitish Kumar reportedly declared "All’s well that ends well", after the release of the three surviving hostages. Crucially, nothing has ended in Bihar: 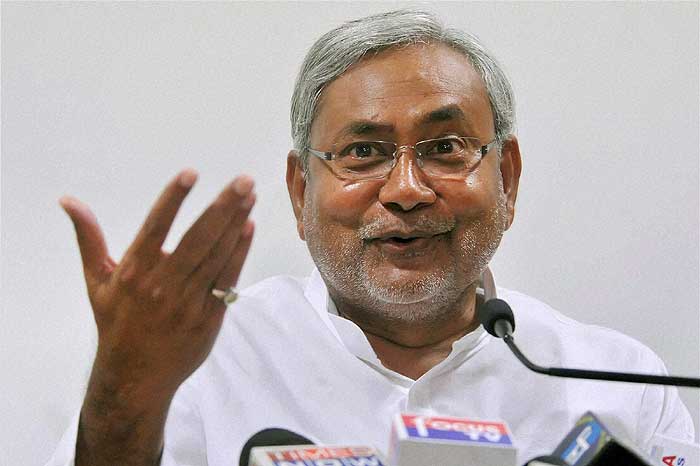 "We will saturate the Naxal-prone areas with development", Bihar Chief Minister Nitish Kumar had grandly intoned in November 2009, outlining his ‘strategy’ to neutralize the Maoist insurgency, his head entirely wrapped up in clouds. Rejecting the centre’s declared policy of dealing with the Maoists with a firm hand in ‘massive and coordinated operations’, and the proposal for a Unified Command (themselves poorly conceived, entirely under-resourced and far from successful initiatives), Kumar argued, that "enforcement action alone" would only lead to "wider alienation" and make "heroes out of the leaders of the extremist organisations... leading to only symptomatic treatment, leaving the underlying disease to reappear in more virulent form."

The ‘symptoms’ that Kumar chooses to wilfully ignore have, however, now delivered a resounding slap in the face to his government, brought his administration to its knees, even as more lives among the state’s beleaguered and directionless Security Forces (SFs) have been wasted to blind stupidity.

On August 29, 2010, at least seven SF personnel were killed, and another seven injured, in a ‘combing operation’ gone wrong, when they were attacked by cadres of the Communist Party of India – Maoist (CPI-Maoist), their numbers variously estimated at between 300 and a thousand, in the Kajra Police Station area of Lakhisarai district. ‘Intelligence reports’ had indicated ‘Maoist presence’ in the forest, but had omitted any assessment of Maoist strength in the area, leading the Bihar Police ‘search teams’ into a lethal trap – a pattern repeated in almost every major massacre of SF personnel by the Maoists in recent years. 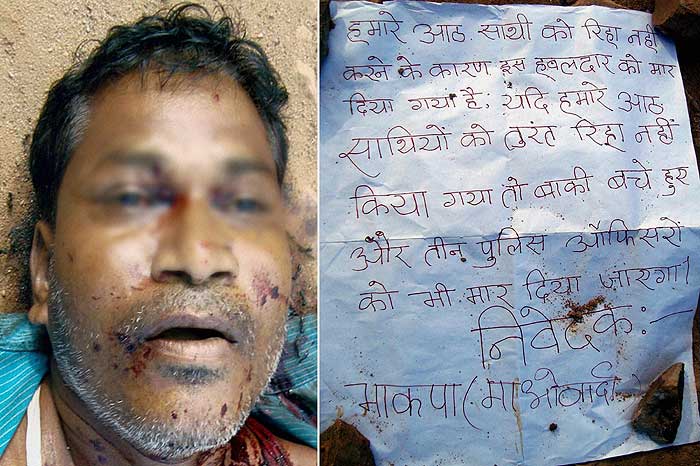 A combo picture shows slain policeman Lucas Tete and a note left by Maoists threatening to kill other policemen in their custody, at Lakhisarai in Bihar on Friday Sep 03, 2010

The Maoists then executed Lucas Tete in the night of September 2, after two ‘deadlines’ given by them had passed without response from the government – beyond appeals for the release of the abducted policemen – and warned that the remaining hostages would also be killed unless their comrades were released. On September 6, however, the three surviving policemen were released after Chief Minister Kumar had announced safe passage for the Maoists out of the area in which they had been substantially contained by augmented forces.

It is significant that the decision to release the remaining policemen came after the heavy redeployment of a combination of forces – Bihar Military Police (BMP), Central Reserve Police Force (CRPF), the Special Task Force (STF) and the Special Action Force (SAF) – from four adjoining districts in combing operations, and the virtual sealing off of the Maoists’ escape routes. The seething anger in the SFs suggested the possibility of sweeping vendetta killings – an outcome that the Maoists were apparently eager to escape.

Nitish Kumar has attempted to extract victory out of this present disgrace, and has emphasised that "no deal was struck with the Naxals". He concedes, nevertheless, that "there is no guarantee that such incidents will not be repeated."

Kumar has been posturing and mouthing hackneyed nonsense about the Maoists being "part of our society" and that they had been "misled into violence",  for years now, even as he has presided over perhaps the most anarchic state in India. A degree of optimism had certainly asserted itself during the first years after Kumar took over as Chief Minister in November 2005, but the natural torpor of governance in Bihar appears to have reasserted itself since. In the interim, his government has projected itself as conciliatory towards, and has been seen as weak by, the Maoists, who increasingly use Bihar as a favoured safe haven from the relatively worsening operational environments in the neighbouring states, particularly of West Bengal and Jharkhand (though elements from Chhattisgarh have also found safety there).

It is significant that the Naxalites have orchestrated at least 13 significant incidents of abduction since the formation of the CPI-Maoist in September 2004, and before the August 29 incident. At least three of these have ended in the death of hostages:

June 17-19, 2009: CPI-Maoist cadres, who had abducted two personnel of the Chhattisgarh Armed Force (CAF), Ram Bhuwan Patel and Dhanjay Verma, from a hilly stretch in Bijapur District, Chhattisgarh, on June 17, killed them and dumped the bodies on a roadside in a forested area. Police said the victims' throats were slit with sharp edged weapons.

September 30, 2009: Six CPI-Maoist cadres abducted Police Inspector (Special Branch) Francis Induwar, posted in the Khunti District, Jharkhand. On October 3, the Maoists demanded the release of their senior leaders Kobad Ghandy, Chhatradhar Mahto and Chandra Bhushan Yadav. On October 6, the Jharkhand Police found the decapitated dead body of Francis Induwar on the Jamshedpur-Ranchi Highway, with a note from the Maoists saying that they could expect more of the same treatment if their demands were not met.

June 19, 2008: Three Special Police Officers (SPOs) were killed by the CPI-Maoist in the Banda Police Station limits of Dantewada District, Chhattisgarh. The SPOs had been abducted along with five Policemen following an encounter in the forests, seven kilometers away from Konta town, on June 18. The SPOs were taken to a Maoist camp in the forests blind-folded where they were asked to distance themselves from the Salwa Judum and the Police. Five of them were then let off and three others – Gopal, Bhadru and Lakshmaiah, were shot dead and their bodies abandoned near Banda village.

In two of the 13 incidents, the release came after Maoist demands were conceded. In the remaining eight, the abducted persons were released after various durations in captivity. None of the preceding incidents occurred in Bihar.

Nevertheless, Bihar has seen a steady worsening of Maoist-related violence over the past five years, after an earlier peak in 2005, when a total of 106 persons (25 civilians, 29 SF personnel and 52 Maoists) were killed. Total fatalities have, since, climbed from 40 in 2006, to 49 in 2007; 71 in 2008; 78 in 2009; and 53 in 2010 (till September 5, 2010). Crucially, the ratios of civilian and SF to Maoist fatalities have been adverse in every year after 2005, clearly demonstrating the loss of initiative that has resulted from the Nitish Kumar government’s declared policy position, and the rising threat to civilian lives and property.

Bihar is among India’s poorest states, and it takes an extraordinary capacity for delusion to believe that the cumulative developmental deficits and the sheer enormity of the population under poverty can quickly be transformed by any ‘strategy’ to ‘saturate’ affected areas with ‘development’, even if the most extraordinarily well oiled machinery of governance was in place. In Bihar, administration is a disaster and a national joke. Nevertheless, such fantasies continue to secure political endorsement, even as fundamental tasks of providing a modicum of security to life and property are comprehensively ignored.

In a remark that is both extraordinarily callous and obtuse, Nitish Kumar reportedly declared "All’s well that ends well", after the release of the three surviving hostages.

All has certainly not ended well for the seven policemen killed in the encounter on August 29, and for their families; or for ASI Lucas Tete and his family.

Crucially, nothing has ended in Bihar: the Maoist rampage continues; the infirmity and ambivalence of the state and its agencies persists; endemic poverty and backwardness remain unchanged; administrative incompetence and corruption has not migrated out of the State. Yet, Kumar is, once again, mouthing fantastical nonsense about the Maoists ‘joining the national mainstream’ by participating in the coming State Assembly elections. Such a depth of incomprehension, or, perhaps more accurately, of falsification, can only bring more death.

'Not Thinking Of Retiring'