Alwar Lynching: 'Don't Muslims Have A Right To Live In A Secular Nation?' 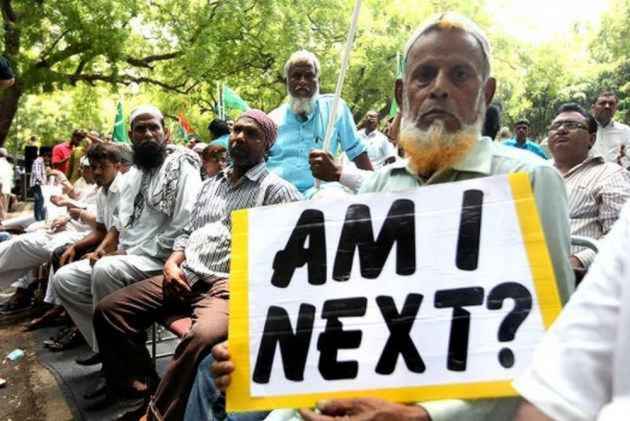 A mob suspected a man to be a cow smuggler and beat him to death in Rajasthan’s Alwar district on Friday.

The man, identified as Akbar Khan, had two cows with him when he was walking through a forest area near Lalawandi in Alwar district. Another man accompanying him managed to escape the mob, but 28-year-old Khan was declared brought dead when taken to a hospital in Ramgarh.

The police said the investigation has begun and will gain momentum after the post-mortem report.

Nawal Kishore Meena, SHO, Ramgarh told Outlook the incident will be given utmost importance and dealt with in accordance with the law. A case has been registered against unidentified people under Section 302 of the IPC (murder) and the investigation will resume after Akbar's post-mortem report comes out, he said.

"What I can tell you now is that an investigation is ongoing.  The mob has not been identified yet and are efforts are on to trace them.  We'll take our next steps once the victim's post-mortem report comes out."

Chief Minister Vasundhra Raje said "strictest possible action" would be taken against the perpetrators. But these words have failed to provide reassurance to Khan’s family and community.

Sher Mohammad, community leader of Ramgarh, alleged the mob have support of the police.

"The killers here don't fear the Supreme Court or the law. And why should they? They go around lynching people because they have the support of the police. The police here have granted them impunity and only the government is to blame," Mohammad told Outlook.

The incident comes four days after the Supreme Court took cognizance of increasing incidents of mob lynching in the country, even urging the Parliament to bring a new law to deal with it.

Mohammed, who spoke on behalf of the family, claimed the police are lying. "They have detained two people. The villagers helped them find them. They have identified the gundas and at least 2 of them are with them. I am 100% sure," he said.

He expressed his discontent over the investigation done by the police, citing various precedents. "Pehlu Khan was lynched and his killers were granted bail in 2 months, the media hailed them a hero. What is there to expect from the police. They know they will not do anything because the government does not want them to do anything," he said.

Accusing the state government of allowing the "killing of Muslims", Mohammad said it is a strategy to consolidate Hindu votes ahead of the elections.

"If a union minister like Jayant Sinha garlands men convicted of lynching a man, and a Sadhvi compares Pehlu Khan's killers with Bhagat Singh, what else can you expect? The government has allowed the killing of Muslims to consolidate the Hindu vote bank," he said.

The people behind the act suspected Akbar of smuggling cow, a charge that has not been verified.

Mohammad said the family needs more than a public outcry.

"We want the issue to be taken up in the Monsoon session of the Parliament. We won't accept Akbar's dead body till then. It is a secular country. Don't we have a right to live here?," he said.