His father was a hard taskmaster, and would wake Amjad up at 4 am for the pre-dawn riyaz of the raag Bhairon. 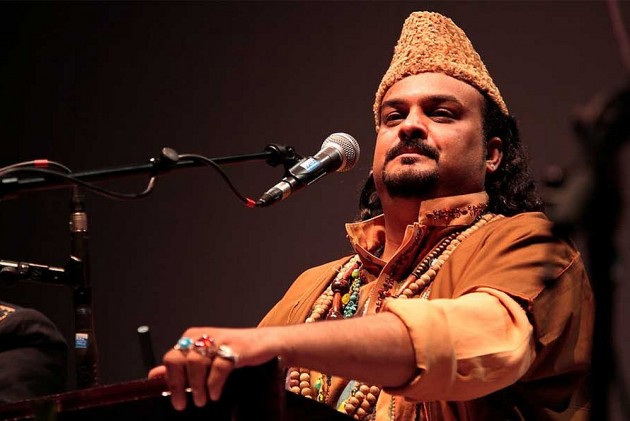 Amjad Sabri, who was shot dead in Karachi on June 22, dominated the qawwali scene on the subcontinent, particularly in Pakistan and India, with soul-stirring renditions of mystic Sufi poetry.

An integral part of Pakistan's renowned qawwali band Sabri Brothers, which he formed along with his brother Ghaznavi Sabri, the 45-year-old hailed from a family of musicians and singers linked to the 17th century durbar of the Mughal Empire.

Last year, Amjad allegedly mentioned members of the Prophet Muhammad's family in a song, which triggered a major controversy. He was charged with "blasphemy" and a case was also filed against him.

His life was said to be in danger since. A splinter faction of the Pakistani Taliban has claimed responsibility for the singer's killing, saying that his qawwalis were "blasphemous".

"Amjad Sabri, tragic departure. Not just sang with me but escaped death with me and my family on 10 April 2004 from a bomb blast in Karachi," twitted Indian film singer Sonu Nigam.

The Pakistani was also in the news in India for claiming that the Salman Khan movie Bajrangi Bhaijaan violated copyrights by using the super hit song Bhar do jholi (Fill my bag), one of Sabri Brothers' trademarks and attributed to his father, the legendary qawwali singer Ghulam Farid Sabri, without obtaining the rights.

Qawwali, according to Encyclopaedia Britannica, is "an energetic musical performance of Sufi Muslim poetry that aims to lead listeners to a state of religious ecstasy – to a spiritual union with Allah".

Qawwali is a particular style of music rooted in Sufism or Islamic mysticism. A typical qawwali ensemble is composed of one, two or more lead male vocalists, called qawwals, with a hand-clapping chorus singing the refrains.

Sabri Brothers were probably the most famous qawwals after the peerless Nusrat Fateh Ali Khan, who was credited with not only elevating the art of qawwali to a higher and newer plane, but also taking the majestic form beyond South Asia.

However, it was Sabri Brothers who were said to be the first to introduce qawwali to the western world with their stupendous performance at Carnegie Hall in New York in 1975. Sabri Brothers, especially the father-son duo, have contributed substantially in spreading and popularising the Sufi art and mystic poetry.

Amjad Farid Sabri was born on December 23, 1970, in Pakistan, where his family had migrated after India's independence in 1947. Music was obviously flowing in his veins given the rich history of his father, who reigned supreme as a qawwal in Pakistan and India in the 1970s and 1980s, and forefathers.

For generations the family adhered to the Sabiriyah branch of Sufi Islam. And hence the name Sabri.

Amjad was initiated into music at very young age, when he was barely 9, by his father, whose golden voice and enviable gift for qawwali he inherited. It was but natural for him to carry forward his family's tradition into the world of music, specifically the genre of qawwali.

His father was a hard taskmaster, and irrespective of Amjad having slept early or after midnight, he would wake him up at 4 am for the pre-dawn riyaz of the raag Bhairon.

All the pleas of Amjad mother's to let the children sleep would make no difference to Ghulam Farid Sabri, who was convinced that the early morning riyaz was ideal for music.

"I realised that my father was right in waking us up early in the morning," Amjad admitted later, when he himself became a topnotch singer. "If a raag is rendered at the correct time, the performer himself enjoys it to the fullest."

By the time he was 12 or so, Amjad started accompanying his father to qawwali concerts. Given his brilliant voice and style of singing, it was inevitable for the people not to fall in love with him and his qawwalis.

Dedication and determination, as well as regular riyaz, helped Amjad become an outstanding singer, who was always at his vintage best as a qawwal. He was also a fine ghazal singer. He performed across the globe, produced both traditional and modern music and sang for soundtracks for Indian and Pakistani films.

Amjad, "with his tall, burly frame, glossy locks and a tiny circle of gold glinting at his ear", and singing qawwalis in his inimitable style, was cynosure of all eyes whenever he was at a musical performance. It was not surprising that he commanded a large following.