Though there are striking similarities between Jayalalithaa and Mamata, the differences are equally stark. 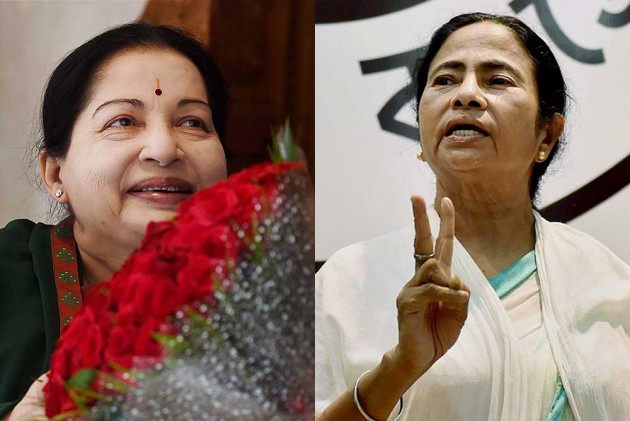 May 19 decided the fate of two of the most powerful women politicians in India: Jayalalithaa and Mamata Banerjee. While Mamata expectedly returned to power in West Bengal, albeit by a larger margin than expected, Jayalalithaa became the first chief minister in Tamil Nadu in three decades to buck anti-incumbency.

Though there are striking similarities between Jayalalithaa and Mamata, the differences are equally stark. The way they ran their campaigns in the 2016 elections offers a clue. Mamata crisscrossed West Bengal for nearly 60 days addressing some 200 rallies; Jayalalithaa on the other hand was present at only 30-odd election meetings.

But first the obvious similarities. Both Jayalalithaa and Mamata are undisputed leaders of their respective parties, the AIADMK and the Trinamool Congress. The two parties are virtually identified with the two women leaders and theirs is the last word in the party. Both Jayalalithaa and Mamata are larger than life though the very fact that the former is known as Amma (mother) and the latter as Didi (elder sister) point to subtle differences on how they are not only seen by the public, but also on how they want to project themselves.

Let us now turn to the differences, which are important markers of the contrast between the two regional parties that they helm and the political cultures of Tamil Nadu and West Bengal. Though both are Brahmins by birth, Jayalalithaa and Mamata’s background and political careers could not be more different. Jayalalithaa, a former film star, was educated in elite convent schools. Mamata in contrast was born to lower middle class parents, went to a nondescript school and college and never really knew any other vocation than politics.

The political trajectories of Mamata and Jayalalithaa have been very different too. Jayalalithaa was initiated into politics and mentored by Tamil film star and founder of AIADMK, M.G. Ramachandran, though she later tried to outmanoeuvre MGR when he was unwell. Mamata had no political mentor comparable to MGR. Though she first achieved prominence as a Congress MP during Rajiv Gandhi’s tenure as prime minister, she had the gumption to break away in 1997. In that sense, Mamata’s achievement of forming a successful party, without any patrons or organisation to speak of, is much greater than Jayalalithaa’s.

It is in their political styles that the two women are most different. Due to the legacy of her film star days and more recently poor health, Jayalalithaa is inaccessible and rarely seen in public. While this might seem odd for a politician, her physical absence is made up by the cult of personality around Jayalalithaa and her huge cut outs all over the state, which are emblematic of Tamil Nadu politics. In fact, the journalist Vaasanthi writes of the time when Mother Teresa had visited Chennai to inaugurate Jayalalithaa’s Vision 2000 programme and commented that nowhere in the world had she seen such huge cut outs of a political leader.

To continue with that story, Jayalalithaa apparently disarmed Mother Teresa by prostrating before her. Jayalalithaa had on that occasion done something that is routinely practised by her sycophantic party members. Indeed, even in parliament AIADMK members always preface their speeches with a reference to their supreme leader, Puratchi Thalaivi.

Unlike Jayalalithaa, who stays in a palatial residence in Chennai’s Poes Garden, Mamata assiduously cultivates the common touch and continues to stay in her modest residence in Kalighat in Calcutta. She also understands the powerful symbolism of clothes – so well exploited by Mahatma Gandhi and so wonderfully analysed by the anthropologist Emma Tarlo – and is rarely ever seen without her plain tant saree and rubber chappals. In sharp contrast to Jayalalithaa’s inaccessibility, Mamata revels in public speaking -- often employing a crude political discourse which irks the Bengali bhadralok class -- and mingling with crowds. It isn’t just the number of rallies that she addressed during the election campaign that set Mamata apart from Jayalalithaa, but also her intense energy.

On the last day of campaigning in Calcutta, for instance, Mamata walked several kilometres in the late afternoon heat at a speed with which her security and supporters could not keep up with. And though Mamata’s face can be seen on posters and hoardings, it’s nowhere near that of Jayalalithaa’s propaganda efforts.

In terms of the politics that they practise, there are differences too. Jayalalithaa has continued and considerably expanded the populist policies of MGR who began the mid-day meal for school students in 1982. The late M.S.S. Pandian once described these policies as enjoying “massive support from the poor,” but serving the “interests of the rich.” Jayalalithaa has showered freebies on voters as CM and promised even more. While Mamata too has given subsidised rice and free bicycles to students in her first term, which endeared her to rural and poor voters, she is constrained by West Bengal’s dire finances. But her political rhetoric is very much to the left. One of the planks that Mamata rode to power in 2011 was agitations against land acquisition for industry, the kind of politics that has no appeal for Jayalalithaa.

Corruption though has dogged both leaders in recent times. For Jayalalithaa, corruption charges have been a constant companion. Though Mamata is seen as personally honest, corruption charges against several of her senior party leaders were an issue in this election. Their wins, however, go to show that charismatic politics combined with populism can trump corruption.