Amnesty International Launches Postcard Campaign, Calls For End To Use Of Pellet Guns In Kashmir

The campaign urges for setting up an independent investigation into cases of killings or serious injuries caused by pellets. 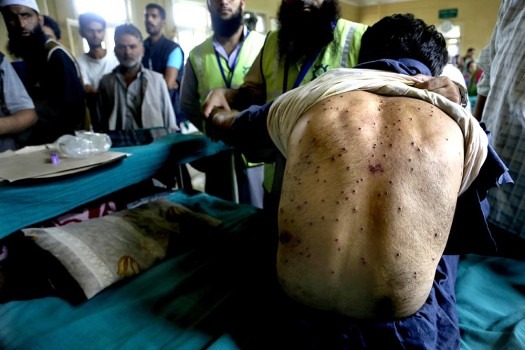 International human rights watchdog, Amnesty International, today launched a postcard campaign to press for the ban on pellet gun use in Jammu and Kashmir.  The campaign urges for setting up an independent investigation into cases of killings or serious injuries caused by pellets. The Amnesty will submit signed postcards and petition to Chief Minister Mehbooba Mufti.

“Pellet-firing pump-action shotguns have been responsible for killing, blinding and injuring thousands of people in Kashmir, said Amnesty International India, as it launched the campaign and online petition seeking a ban on the use of the shotguns. The campaign aims to bring people from across Jammu and Kashmir to write postcards to the state Chief Minister Mehbooba Mufti.

“It is shameful that the serious concerns raised repeatedly regarding the use of pellet-firing guns have failed to receive sufficient attention from the state government,” said Aakar Patel, Executive Director, Amnesty International India.

“The use of pellet shotguns is inherently inaccurate and indiscriminate. These so-called ‘non-lethal’ weapons have killed at least 14 people since July 2016. Thousands more have suffered extensive and debilitating physical and psychological harm. It is unconscionable for authorities to continue using pellet-firing shotguns despite being aware of the damage they cause.”

“Through this campaign, we want to send a message to the state government that the people of Kashmir want an immediate end to the use of pellet-firing shotguns. The voices of the victims and those who stand in solidarity with them must be heard,” said Zahoor Wani, Campaigner, Amnesty International India.

The state government admitted recently in the state legislative assembly that 6,221 persons had received pellet shotgun injuries, including 782 eye injuries, between July 2016 and February 2017.  However, the human rights groups based in the Valley say the number of pellet injured persons are in thousands.

In September 2017, Amnesty International India released a briefing, “Losing Sight in Kashmir: The Impact of Pellet-Firing Shotguns”, which documented cases of 88 people whose eyesight was either temporarily or permanently damaged by metal pellets fired by security forces between 2014 and 2017.

The Amnesty says security forces have used metal pellet-firing shotguns for crowd control in the Kashmir valley since at least 2010. When pellet shotguns are fired, a large number of small metal pellets spread indiscriminately over a wide area. There is no way to control the accuracy, trajectory or direction of the pellets. Due to their inherently inaccurate and indiscriminate nature, the weapons have a high risk of causing serious and permanent injury to everyone in the area.

The Amnesty says the use of pellet shotguns in Kashmir violates international standards on the use of force. The UN Code of Conduct for Law Enforcement Officials states that law enforcement officials may use force “only when strictly necessary and to the extent required for the performance of their duty”. The UN Basic Principles on the Use of Force and Firearms states that force should only be used when “unavoidable”, and law enforcement officials should “exercise restraint” in using force and “minimize damage and injury”.