Among Kashmiris In Delhi, Wani Will Remain A Hero 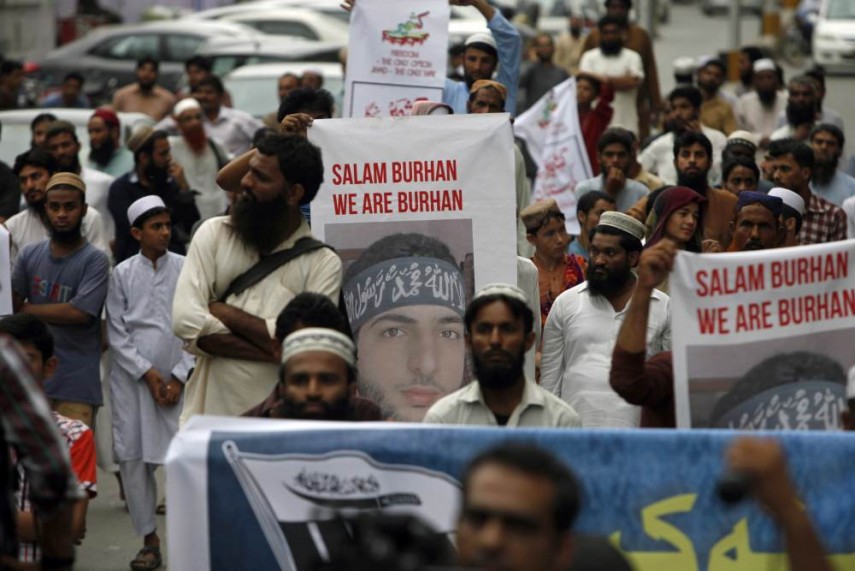 The killing of Hizbul Mujahideen commander Burhan Wani in Kashmir last week has cast a veil on the lives of Kashmiris living in Delhi, most of whom live in ghettos in Zakir Nagar, Batla House, Jangpura, Laxmi Nagar and the Walled City since they usually don't get houses let out to them elsewhere for two reasons -- they are Kashmiri and they are Muslim.

"A married Kashmiri, there's a rare chance might find a house on rent. For a single man, it's next to impossible," says Nishwan Rasool, a freelance journalist who lives in a comfortable house with his friends in Zamia Nagar. His friends from all walks of life and backgrounds frequent his place. But since the protests began in Kashmir, this has stopped. Rasool has been at home since then. "I know I'm being watched all the time. All Kashmiris are being watched." A lurking suspicion, he says, that something might happen.

Unlike him, Rashid (name changed) says Wani is a hero to him and the dozen-odd group that lives in Zakir Nagar. The travel agent is an affable person until Kashmir is mentioned. He lives in a Zakir Nagar mansion with others among whom a girl, who works part-time for an NGO, says, "Try (to) understand, the common people in Kashmir are suffering. (The Indian) Army is causing the suffering. They were supposed to protect." Another insists Wani isn't a terrorist but a militant, who's waging war for a larger cause.

There are different versions on Wani's life. But there's a common thread: he's product of pain and suffering. They say the Army forced him to become what he did, and then killed him. He's a symbol of what's wrong in the Valley, they say. His father's a teacher in a local school at Tral. A shy boy with no distinguishing feature, he lost three of his cousins in security operations. They said Wani's brother was killed in front of his eyes by some armymen but no one was punished for the random extra-judicial killing.

From that day on, his only desire was to seek revenge. Wani went to Pakistan-occupied Kashmir and returned within a year after training. Barely 16, he led the local militant cadre since then and was youngest among the secessionists. Even Yasin Malik was 19 when he joined the Jammu and Kashmir Liberation Front (JKLF).

Each Kashmir youth in Delhi, vouches for Wani, as if they knew him personally, "Wani never killed anyone". He would make videos with a message of hate or revenge directed against the army. He drew a distinction between the state police manned by locals and the army. His ire was directed against the army. A few months ago, a fake video went viral where he warned Hindus not to come for the Amarnath yatra. A week later, another video surfaced, this time with the real Wani, where he welcomed the pilgrims and assured no disruption in the yatra, saying the earlier tape was a fake and possibly an army ploy to discredit him.

His key aide, Tariq Ahmad Pandit, 25, was arrested in May this year from Pulwana and is considered a traitor. Wani had mentioned a rift between him and Pandit in one of his videos.  The story in circulation among Kashmiris in Delhi and elsewhere is that Pandit helped the army reach Wani. Within a few days, Wani was gunned down. An eyewitness has claimed Wani didn't fire a single bullet.

"Kashmiris are pawns, and someone else determines their destiny. This cannot go on," says Faiz (name changed), who has business interests in Delhi and Kashmir. A speed freak, Faiz has been in Delhi for five years with his younger brothers and lost his brother-in-law in a bomb blast in 2010. He doesn't know who's responsible, police point to militants. In the Valley, life and death is more layered and nuanced than in the rest of India, no one knows who is killing who: militants kill people in army fatigues, Special Operation Groups operate in militant garb.

"There's latent anger," says a graphic designer, who has many friends in Delhi. "I would do the same, if the army had kill my brother." Wani's dead body was the rallying point. Prayers went on for hours, thousands participated. He says Wani is much bigger than Afzal Guru - a surrendered militant who was surreptitiously hanged and buried at an undisclosed location within Tihar jail. He was held guilty of orchestrating the Parliament attack, though none of the POTA charges against him could stand judicial scrutiny, despite that he was sentenced to death by the apex court to 'satisfy India's collective conscience'.

"Why were the authorities so scared to handover the body? If they were so sure he attacked Parliament, he should have hanged in the public," says Faiz. The dead body of Afzal Guru would have created a similar uproar, a rallying point of rage and anger. Not all agree. The graphic designer is of the view that when a militant dies, there's a procession, people turn up in large numbers, attend the funeral, the situation may remain tense for a day or two, but no one is killed.

This time, it's different. People are outraged. It's spontaneous. Even separatists like Syed Ali Shah Geelani are appealing for peace, they say. So what will India do? 'India' sounds so distant from them.

Farooq, an aspiring model and a student, will go to Srinagar soon. His family lives in Southern Kashmir. There's no news from there, media is not allowed.

Rumour is that the army is pulling out the injured from ambulances and beating them to a pulp, some have even been killed. The number of dead is uncertain. They don't report such things in the mainstream media nowadays.

Rehana (name changed), whose marriage was postponed in view of the protests, says, "BJP leaders say all Muslims should go to Pakistan but they kill people in Kashmir if they demand Azadi."