Navjot Kaur Sidhu was the chief guest at the Ravana effigy burning event where the incident took place and had said earlier that she came to know about the accident as soon as she left the site. 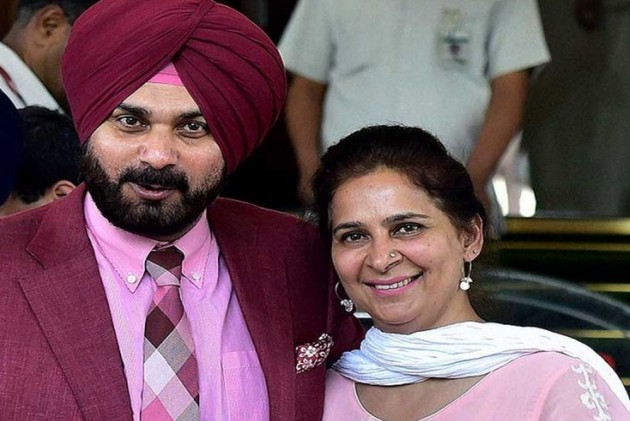 A report of the magisterial probe into the Amritsar train tragedy that killed around 60 people and left several injured has apparently given a "clean-chit" to Navjot Kaur Sidhu, wife of Punjab minister Navjot Singh Sidhu.

Navjot Kaur Sidhu, was the chief guest at the Ravana effigy burning event where the incident took place. Earlier she had said that she came to know about the accident as soon as she left the site.

Jalandhar Divisional Commissioner B Purushartha - appointed the special executive magistrate by the government to probe the accident - indicted the son of a Congress councillor, who organised the event as well as officials of Amritsar district administration, municipal corporation, railways and local police, official sources said.

The crowd watching the burning of a Ravana effigy near Joda Phatak on October 19 were mowed down by a passing train.

A 300-page report of magisterial probe into the accident stressed that Saurabh Mithu Madan, son of the Congress councillor and a close aide of the Sidhus, should have ensured safety of people at the venue, official sources said.

The report submitted to the Punjab Home Secretary last month also blamed Amritsar administration and municipality officials over safety measures and permission given for holding the event.

The role of railways also came under the scanner for giving the green signal to a fast train despite the presence of a huge crowd on the tracks.

The Home department has put up the file pertaining to the report before Chief Minister Amarinder Singh for further action.

Notably, an inquiry conducted by the Chief Commissioner of Railway Safety into this incident had blamed "negligence" of people, standing on the railway track, for the tragic incident.

The statements of over 150 people including railway officials and Navjot Kaur Sidhu were recorded by Purushartha, while Navjot Singh Sidhu, who had questioned the Railways for giving clean chit to loco-pilot of the train, had submitted his statement in writing.

Opposition Akali Dal had earlier rejected the institution of the magisterial probe and sought registration of case against Navjot Kaur Sidhu and the event organiser, claiming that she allegedly left the venue without bothering about the victims.

Earlier, Sidhu had urged all political parties to avoid indulging in mudslinging. Sidhu, who visited the civil hospital to meet the bereaved families, said the accident was an outcome of negligence and that it was not motivated.