scores of people staged a sit-in on railway tracks in Joda Phatak, demanding action against the erring officials and train driver and seeking adequate compensation for the victims. 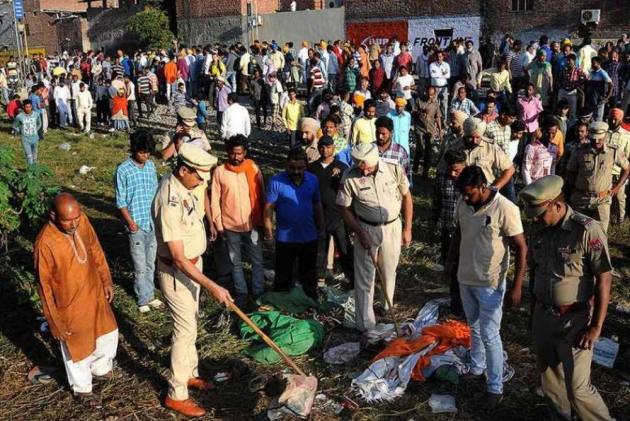 A day after 60 Dussehra revellers were mowed down by a train near Amritsar in Punjab, Union Minister of State for Railways Manoj Sinha on Saturday any lapses on part of the Railways leading to the disaster.

The Railways was not informed about the Dusshera ceremony near the Jora Phatak vicinity either by the area administration or the event organisers, he added.

"In fact, the Commissioner (Amritsar) in his report has said he has not granted permission to hold the Dusshera festival at the spot," Sinha, who visited the accident site at midnight, told reporters.

On Friday, a 700 strong crowd watching a huge Ravan effigy go up in flames amid exploding crackers spilled on to the tracks at Jora Phatahk when the Jalandhar-Amritsar DMU passenger train heading to Hoshiarpur from Amritsar came hurtling down around 7 p.m.

In just 10-15 seconds it left behind a heap of crushed and dismembered bodies. Video clips posted on the social media showed some people who had apparently seen the approaching train tried to run away

Sinha said the venue was nearly 70 metres from the accident spot which was not the Railways'.

Witnesses and survivors said the deafening noise of fire crackers masked the sound of the approaching train.

Saying it was not the time for the blame game, Sinha added that there was no provision of barricading along railway tracks across the country.

Earlier Chairman Railway Board Ashwani Lohani had explained that the accident site falls under the "mid-section of the two stations" where the trains run at their "assigned speed" as per the condition of the track.

Lohani on Saturday also dismissed the railways' responsibility in the tragedy. "The place where the accident happened was basically mid-section between two stations -- Mananwala and Amritsar and not at a level crossing."

"Trains run at their assigned speed and people are not expected to go on the tracks. It was a clear case of trespassing," he said.

"It's the duty of the public not to hold public functions near the railway tracks. Even the local administration should not allow such functions," Sinha said, adding "The driver could not see the crowd standing on the tracks because of the curve," he added.

According to a senior railway official, the incident happened some 340 metres from an interlocked level crossing of the railways.

Lohani also said that the railway posts its staff at the manned level crossing to regulate the road traffic and nod at the mid-sections of the railway track between two stations.

The Railway Board chairman said at Jora Phatak the Jalandhar-Amritsar Diesel Multiple Unit (DMU) passenger train which was running at its assigned speed, its loco-pilot applied brakes to slow it down.

At the time of the incident the gates of the manned level crossing were closed and the train was given the green signal.

When asked about the responsibility of the loco-pilot, Lohani said, "Our initial report suggest that the loco-pilot applied the brakes and the speed came down from 90 kmph to around 60-65 kmph. We are still looking at the seepdometer charts," Lohani said.

The train driver has been detained at the Ludhiana railway station and questioned by the Punjab and Railway Police on Saturday.

A senior Railway Ministry official, however, admitted that the loco-pilots of the Diesel Multiple Unit (DMU) Jalandhar-Amritsar Passenger train did not apply emergency brakes.

Emergency brakes could also derail the train at high speed, the official explained.

Meanwhile, scores of people staged a sit-in on railway tracks in Joda Phatak on Saturday, demanding action against the erring officials and train driver and seeking adequate compensation for the victims.

The protesters raised slogans against the state government and demanded action against the train driver.

One of the protesters alleged the train passed through the area at a high speed and that the driver did not slow down the train despite the presence of a large crowd.

Later, police chased away the protesters when they tried to move towards residential areas from the railway tracks.

Police have barricaded the area to prevent the protesters from reassembling.

Doctors at the Civil Hospital said that the death toll could rise as some of the injured were critical. Many killed were migrants from Bihar and Uttar Pradesh.

The Punjab government has declared state mourning on Saturday and a probe has been ordered.

Railway Minister Piyush Goyal who was in the US, cancelled all his engagements and was set to return.

Punjab Chief Minister Amarinder Singh who arrived in Amritsar on Saturday at the accident spot 16 hours after the tragedy, has announced Rs 5 lakh compensation each to the kin of the deceased immediately after the incident. He ordered a magisterial inquiry into the Amritsar train accident and said a report will be submitted in four weeks. The CM reached hospital and met the injured and kin of those killed in the tragic accident. He also cancelled his proposed Israel visit in the aftermath of the disaster.

The Prime Minister also announced Rs 2 lakh compensation each to the families of the dead and Rs 50,000 each to the injured.