Rather than providing avenues and spaces which can promote critical thinking and a questioning attitude towards issues of hierarchy and gender bias, AMU actually ends up reinforcing it. 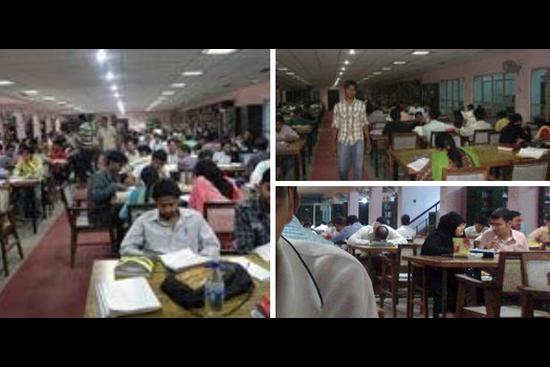 Let’s get some facts straight. There is no ban on girl students at the Aligarh Muslim University (AMU) to issue books from the main library of the university. At the post graduate level, the university is co- educational and girls and boys have equal access to both departmental libraries as well as the main Maulana Azad library. The media cry of a ban on girls’ access to the main library is therefore clearly a misrepresentation of facts on the ground; either due to sheer ignorance or because of an incorrigible urge to portray Muslims as medieval and backward. By portraying AMU as a fortress of obscurantism, the media has only strengthened the hands of the conservative elements in the university by giving them a handle to argue that the world is against AMU.  Playing the victim, these conservative elements will block out any progressive discussion on the campus.

One of these discussions has been around for some years now. Undergraduate girl students, who have separate teaching and residential arrangements, away from the main AMU campus, have been demanding access to the books of the main library for at least half a decade. This demand has been raised in their elections as well as in petitions to different Vice Chancellors. It is the rejection of this demand which has led to the present controversy.

The administration’s reason for not allowing these undergraduates library access is simply ridiculous, to say the least. First, they gave the reason of a space crunch which is clearly a prevarication from the real issue: these undergraduate girls are not demanding to utilize the space within the library, they are simply asking for the right to issue books from the main library. Now how much space is that supposed to take?

The second reason that the University is giving is that since women’s college is at some distance from the main campus, girls coming to the main library would raise serious concerns about their security. Even if one negates the paternalistic and condescending tenor of the argument, the issue can be easily resolved by early issue timings at the main library for girls.

It is not that the AMU administration wouldn’t have thought that their lame excuses would be understood as just that: lame excuses. The real fear perhaps was let out by the PRO of AMU the other night on television. The logic that he gave goes something like this: families which send their girls to AMU girls’ college want a ‘safe’ and ‘secure’ environment for them and these families would not like to see their daughters and sisters venture out of their college campus except on certain specified occasions.

It is almost as if opening the gates of the library for these undergraduates is akin to opening the floodgates of vice! This seems to be the crux of the problem and the source of fear for the AMU authorities. The problem here again is that we do not know what is the basis for such a fear. Do the families who send their girls to this institution take an undertaking from the university that their girls should be locked up for the period for which they are studying? And even if there is such a pressure from the community, then how should a modern university like AMU respond? Should it buckle under the pressure of conservative community sentiments or should it do what it is supposed to, as a modern institution, which is to uphold the dignity of all irrespective of gender by equalizing access to everyone?

This calls for a deeper introspection not just from the AMU administration but also from the larger AMU diaspora. A university is not a family and should never be a family. If anything, it should actively subvert most of the structures which operate within the family. The problem with AMU is that it still thinks itself as an extension of the family. So rather than providing avenues and spaces which can promote critical thinking and a questioning attitude towards issues of hierarchy and gender bias, it actually ends up reinforcing it.

Thus the popular understanding of VC as the father of university and teachers as guardians can only lead to the framing up of dissent as disrespect for the institution understood as family. For women on the campus, this culture has meant continued and extended levels of surveillance and policing perhaps much more than what they are accustomed to within their own families.

All this needs to change. But the problem does not lie with the VC alone, even after readily granting that his remarks were sexist and must be condemned. [He was reported as having said that the Maulana Azad Library cannot accommodate undergraduate women students in the library as they would attract hordes of boys resulting in an "unbearable rush"].  Also, the growing chorus that his regressive thinking is because of his army background should not be taken too far. There have been many bureaucrats and army officials who have turned out be very fine administrators and there have been many academicians who have become authoritarian and have ruined university campuses. Any VC has the potential to become authoritarian. It is only through a critical mass of students and teachers that this tendency inherent in the position of this office can be checked.

The remark of the AMU VC is a reflection of the larger malaise of refusing to recognize the progressive potential of university spaces. With Students’ Islamic Organization (SIO) backed students union declaring that students can’t go against their father (read VC), that malaise only seems to be getting deeper.

In the meantime, let us salute the girls who are raising the banner of revolt, resisting misogynistic regimes and creating spaces for dissent, freedom and access.

Arshad Alam teaches at the Center for the Study of Social Systems, Jawaharlal Nehru University