Much to the delight of the Pakistani hosts, a large number of Indians turned up to celebrate Pakistan’s National Day in Delhi. 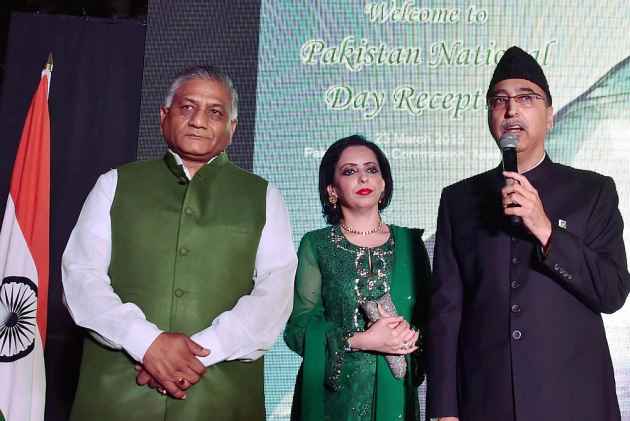 The media hype notwithstanding, the Narendra Modi government is not willing to ratchet up the meeting between Pakistani High Commissioner, Abdul Basit and Hurriyat leaders in New Delhi on Monday to add fresh strains in bilateral ties with Islamabad.

Basit’s decision to invite Hurriyat leaders to the Pakistani High Commission on March 23, to celebrate Pakistan’s National Day, was interpreted in a section of the media as yet another breach of agreement between India and Pakistan to keep the Kashmiri separatist leaders out of the ambit of dialogue between the two sides to resolve all outstanding issues, including that of Kashmir. However, going by the government’s reaction, it seemed that the issue, though may not be palatable, was not big enough for India to once again suspend all dialogue with Pakistan.

Modi wished his Pakistani counterpart on Monday on Pakistan’s National Day, expressing his desire to resolve all outstanding issues between the two sides and tweeted about it. “I have written to Pakistan PM, Mr Nawaz Sharif, conveying my greetings on the National Day of Pakistan,” Modi said in his tweet. In the evening he sent MOS of Ministry of External Affairs, Gen. V. K. Singh to the function at the Pakistan High Commission to represent the government.

Despite the “ups and “downs” in Indo-Pak relations, the Pakistani National Day has traditionally been one of the big events in New Delhi’s diplomatic calendar. Hundreds of people from different walks of life that include diplomats, businessmen, politicians, scholars and media commentators attend the function every year. Traditionally, it has also had senior members of the All Party Hurriyat Conference. A separate table is usually reserved for them, while Pakistani officials and members of the media fawn over them as they enjoy their dinner. This year too, it was no different.

What was, however, unusual was the large number of cameramen and reporters from TV channels outside the Pakistani High Commission gates, trying to take note of all those  who were attending the function. Their attempt to describe most of the attendees as “anti-national”, did little to dampen the spirit as much to the delight of the Pakistani hosts large number of Indians turned up for the Monday evening’s event.

With a green sleeveless jacket over his shirt and trousers, Gen V. K. Singh attended the evening function, ending hours of speculation in the sections of the media that he would “fall ill “at the last minute to stay away from the function. But the Modi government did not wish to convey any such negative signal and oblige the media commentators. Gen. Singh’s tweets after the function, however, led to some further speculation on whether he was made to go the Pakistani High Commission against his wish. Through a number of tweets in the evening, he stressed on the words “ duty” and “ disgust” without any direct reference to Pakistan but allowing speculation in the media that it had to do with his evening’s participation at the Pakistani High Commission.

Pakistani media commentators also felt that India was giving out conflicting signals as the MEA spokesman, Syed Akbaruddin, when asked to respond to Basit’s decision, said, “Let me reiterate there are only two parties and there is no place for a third-party in resolution of India-Pakistan issues.” The Pakistani high commissioner had earlier justified his decision to invite the Hurriat leaders by making it clear that the Indian government had not imposed any restrictions on his meeting with the Kashmiri separatist leaders.

Irrespective of the different interpretations, it is clear that Monday’s development was not big enough for the Modi government to suspend its engagement with Pakistan. Last year, days before a scheduled India-Pak foreign secretaries’ talk in Islamabad India had called off the dialogue when Basit held a separate meeting with the Hurriyat leaders in Delhi. Though this had been the practice of his predecessors as well, India decided to put a stop to it by calling off the talks with Islamabad. The Jammu and Kashmir elections, which were scheduled for the year-end, may have also been an additional factor for the BJP-led government in Delhi to have taken such a tough stand against Pakistan. The Indian foreign secretary, S. Jaishnakar have since visited Islamabad and contacts between the two sides at a formal level have been restored.

Indian officials point out that though Delhi does not hold much hope of any breakthrough by resuming dialogue with Pakistan, it faces too many uneasy questions from other countries every time the two sides stop talking to each other. A foreign secretary level dialogue between the two sides may, therefore, take place in the coming days but a formal visit by the Indian Prime Minister to Islamabad may have to wait till next year when Modi’s participation at the SAARC Summit could also result in a separate bilateral meeting with Sharif.

In the larger scheme of South Block, the presence of the Hurriyat leaders at the Pakistani National Day on Monday, therefore, is only a side story.