There’s an enigma about her, for she is reserved in public. “I only speak when I’m spoken to,” she says. 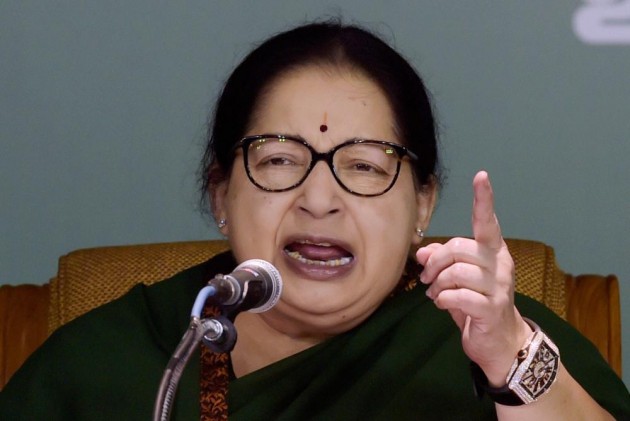 I spend a good part of yesterday evening—soon after J Jayalalithaa was elected the fifth time chief minister of Tamil Nadu—listening to her old English interviews, particularly Rendezvous with Simi Garewal was revealing. I could see a different person emerge in Jayalalithaa. I felt, was so misguided about her, who she is and what I was made to believe. Ignorance is not bliss, it’s foolish mostly.

She was a brilliant student, gave her a firm foundation. Her looks set her apart for the denizens of the region she belongs to. She grew up in Bangalore missing her mother—played character roles in Tamil cinema—who worked in Chennai to fend for her family. She didn’t appear a maverick, as if they look any different, to the contrary she’s a considered person with high emotional quotient.

She lived the initial part of her life in a fairly secured environment, was never in the frontline, never faced the brunt. A sheltered life that was dominated by two strong influences—her mother and her mentor in politics MGR. For last 25 years, she’s on her own. Shashikala is her friend, philosopher and guide; she’s the one who manages her household. Their relationship is not dependent on the electoral fortunes. Jayalalithaa goes to the extent of describing her to have ‘replaced her mother.’

True love doesn’t exist in real life, says Jayalalithaa without blinking an eyelid to Simi Garewal. She hasn’t experienced it, at least. True love is confined to books and cinema. As she was hurled into two high profile careers—cinema and politics—by two greatest influences in her life—Mother and MGR [describes him as a charismatic man with enviable intellect], respectively. She clarifies, though MGR, didn’t pave her way for a smooth succession as a leader. In fact, gaining control of the party—AIADMK—asserting her leadership was one of the most arduous challenges that life had to offer her. And her greatest triumph is when she won the first prize for an English essay writing competition. She was barely ten years old, waited for hours, well past midnight, to show her prize to her mother on her return to home.

Life isn’t bed of roses, survival of the fittest is the rule of the day. She learned the lessons of life the hard way. She was physically assaulted by DMK MLAs on the floor of the assembly, was send to jail infested with vermin. She was not deterred or her confidence shaken, adversity brings the best in a person, she only became stronger. “I didn’t shed a single tear,” she asserts in 28 days that she stayed in the Madras Jail under most appalling, inhuman conditions.

Jayalalitha denies that she’s superstitious and believes in astrology. Well, the two issues are mutually exclusive in Indian context. She accuses media of demonising her. She is not what media portrays her to be. She’s reserved, her emotions are not for public display. Though, she’s “emotionally very sensitive.” And this sensitivity is perhaps her life force. For she believes, if she’s committed to a task, whether she likes it or not, she is obliged to do it well. She topped in all subjects in school, and was the number one heroine of her time in Tamil cinema, she offers as examples to make her point. Later, adds with a diminutive smile, “they say I’m good in politics.”

Some aspects of her life were fascinating to know, is also indicative of how little we know. That she’s a good singer. That she had crush on Shammy Kapoor, but they never met. That she loves Hindi movie songs. That she’s done some dazzling dance numbers, the most striking one is slim Jayalalitha with Dhramendra—where the two dance rather vigorously. I couldn’t help but thinking, how time and circumstances change a person beyond recognition. Her past, I reckon, would appear so alien to her as well. I may be wrong.

There’s an enigma about her, for she is reserved in public. “I only speak when I’m spoken to,” she says.

In her earlier life, when she was sheltered by her mentors, she would, when assaulted by words, by peers and otherwise, would go back home and cry in private. “That Jayalalitha is dead,” she announces. Now she gives back…much more in measure. That’s the metamorphosis she’s gone though. Age helps to put life in perspective.  Work keeps her busy, and she has little time to crib about things she wanted but didn’t happen to her. It’s lonely at the top. Now, she doesn’t do things to please others. She is her own master, master of her destiny. She doesn’t regret the past or the present, but she’d be equally comfortable had she married at the age of 18 and lead a life of a homemaker. And she had, like girls of her age, dreamt of a prince charming descending in her life. She is disillusioned in the way life has panned out. And life experiences have made her acutely conscious of the fact that she is a woman. But things have settled down a bit. Disillusionment didn’t make her bitter. She explains to Simi Garewal, those who got married, also have issues to deal with, existential in nature, anxiety and disillusionment.

Karan Thapar interviewed her in 1999. She was aggressive in a polite way. She didn’t like the tone and tenor of his questions, made it clear to him. She looks into the eyes of people when she talks to them, she asserted when objected Thapr objected that she was reading from a prepared text. Finally, he made an unsolicited observation, as tempers rose, “You’re a tough person, chief minister.” Anger lit up on her face, after pausing for a while, she retorted. “People like you have made me so.”