An Indian Student In Pakistan

It was in the hot and humid weather of August 1997 when I reached Islamabad with my parents. I was seven years old. My parents work for the Indian Foreign Service. They were posted to Islamabad... It was in the hot and humid weather of August 1997 when I reached Islamabad with my parents. I was seven years old. My parents work for the Indian Foreign Service. They were posted to Islamabad.

Islamabad did not have much to offer. There wasn't any such place where any tourist would like to visit. Except, maybe, the biggest mosque in the world, Shah Faisal Mosque. 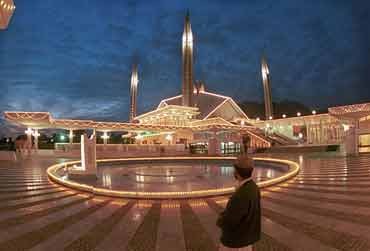 Living conditions were good though - Islamabad is a nice clean area. But there were only two big markets. One was called Super Market and the other was called Jinnah Super. Super Market was a market mostly for buying sports equipment, books and electronic toys such as video games and CDs. Jinnah Super was mainly for clothes and jewellery. Jinnah Super also had a shop called 'Videolink' where you could get pirated videos, especially Indian movies.

Pakistanis watched a lot of Bollywood films. But they called them "Urdu" movies. There was hardly a Pakistani cinema or any other form of entertainment. Islamabad was a terrible city for people who visit restaurants often. There were only two major restaurants. They were called 'Arizona Grill' and 'Papa-salis'. There was also an American Club. But, it was not open to Pakistanis. Don't ask me why because I don't know.

As Pakistan was dangerous for Indians, I didn't travel very much. Not that I minded, to be honest. I visited Lahore and a hill station similar to Shimla called Murrie. I never found Murrie fun, but my friends went along so it became worthwhile. Lahore was a few steps ahead of Islamabad. There was at least a bit of excitement for me as they had Pizza Hut, McDonalds, etc. Lahore is like a miniature Delhi. Except the facilities are not as good and it's a bit warmer.

One troublesome aspect of life in Islamabad was a car following wherever you went. They would harass the people you met and spoke to. The Indians used to call these people the "goons".

There was a Hindi school in the Indian High Commission so that when the children come back to India they won't have too much trouble communicating with the people here. Going to the Hindi school ruined my Fridays and Saturdays. Many times I would lock myself in the bathroom and the bus could not wait so it left. While going to the Hindi school one strange incident happened one day. There would be one van and one bus going to different areas of the city to pick up the children to school and bring them back, like a school bus. While we were going, the "goons", about whom I mentioned earlier, followed us with a video camera. The teacher accompanying us (the mother of one of the kids) was not fearless but she did the smart thing by telling everyone to lie low. As we reached the Embassy, the "goons" went straight ahead.

All this may give you an impression that Pakistanis hated us to the very core of their hearts. But that is not entirely true. I had many Pakistani friends. I still keep in touch with them. My school was called ISOI (International School of Islamabad). There were children from all nationalities attending this school. But the majority were Pakistanis and Americans. However, as the school was expensive, only the rich Pakistani children attended this school. One would expect these children to be spoilt. They may have had a little excess money but they had a clean heart and good intentions. Most of the Pakistani children in my grade (standard) were my close friends. They did not mind that I was Indian or that I was Hindu. In the beginning the Pakistanis did try to mock me, but they were unsuccessful.

In the beginning of my days in Pakistan some kids would insult India in class. I would insult them back in front of my Pakistani teacher. She was not too happy to hear this Pakistan bashing, as she was also patriotic. She complained to my parents. My parents on the other hand felt happy that I stood up for my country in a class full of Pakistanis plus a Pakistani teacher. They didn't even think it necessary to tell me about it till much later.

In my school in Pakistan there used to be a 'host nation' class which obviously had a Pakistani teacher. As I was in the class she was delicate to India. She would tell stories about Pakistan, which bored me, like anything. When India did something controversial for example when India wanted to test their nuclear weapons she told everyone Pakistan's side of the story. That I found quite irksome.

The only thing the Pakistanis had going for them at that time was their cricket team. The Pakistanis have written in their textbooks that Pakistan won the 1965 war against India. I suppose, they do not want the younger generation to feel ashamed of their country. Cricket was their pride (which now a days they don't have much of). If India did badly, I would be mocked. Being mocked in the name of your country by a Pakistani didn't feel very good and I was too young to take it in my stride. Then Anil Kumble took 10 wickets against Pakistan. You could tell that something had happened as there was a loud shriek of "No" (in Urdu).

Many people in higher grades, though, didn't accept me as a normal human being because I was Indian. It's not as if they abused me or anything like that. It's just that I could tell that they were prejudiced. They treated me nicely in the beginning but started swearing at me sometimes calling me a "bloody Indian". Even though some of these people treated me badly, the Pakistanis in my grade were kind to me. My best friend, Shahmeer Shaikh actually threw a huge party for me when I was leaving, inviting around 60 people. Even though the party was not just for me (it was also in honour of my parents) but mostly it was for me. I still keep in touch with him through the Internet.

As there were many Indians in the school as well, there were many battles between the Indians and Pakistanis in my school. Many of the Indian children were very good at cricket. I was an exception. But I got a little guidance from my brother and improved over time. Some of the Pakistanis were really quick bowlers. One day I came across one of the worst bowlers of all time. He was a spinner. He bowled so slow and the ball didn't even turn, and I just went down the track and smashed it as hard as I could and the ball went out of the playground area into the swimming pool. That boy called me a "bloody Indian". I reacted in a very violent manner. Soon the boy went to the nurse with a black eye. After this little predicament Pakistanis gave me more respect. Later on as I played more cricket I become a slow batsmen and always took my time while batting which I still do today unless of course in special circumstances. Except for these brawls there was peace between my friends and I.

Many dangerous incidents happened during my stay in Pakistan. The coup by Pervez Musharraf in which he took controls of the country and threw out Prime Minister Nawaz Sharif. I got a holiday from school because of it! Then there was Kargil. As it was a little risky for an Indian to stay there, my brother and I came to India and stayed with my grandparents for a few weeks. My parents stayed on in Pakistan as they were working like anything. My brother and I were a little worried. 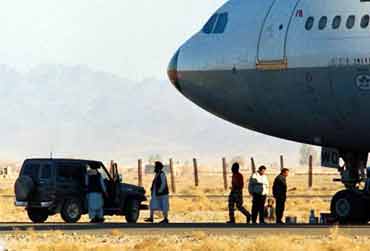 Then the hijacking of the Indian Airlines plane happened. It was not really dangerous for me, but it was for my father. He went to Kandahar to deal with the hijackers. I didn't realize where he was until I saw him on TV. The decision for him to go was made well after I was asleep. I had faith that nothing would go wrong. So I never was really worried. The faith came because my brother said nothing would happen and I used to be very gullible with my brother. My father's visit to Kandahar was worth a bit of fame around that time.

Newspapers in his hometown in Ajjampur, Karnataka wrote stories on the 'Karnataka boy in Kandahar'. Of course, he was all over the TV the day he landed in Kandahar. He negotiated with the terrorists as when he reached they were threatening to kill the passengers. Subsequently, there was a government team which negotiated and he was one of them. Thanks to him and the other members of the team the passengers got out safely. There was one casualty but helping him was out of their reach as it happened before the plane reached Kandahar.

These three years in Pakistan were adventurous, risky and full of excitement. There was never a dull moment. Except for the classes in school! As I look back at these three years they were the best and worst times of my life.