Oslo is dead, we are told. It actually died at birth. And by extension, this will be the lot of every peace agreement in the future... 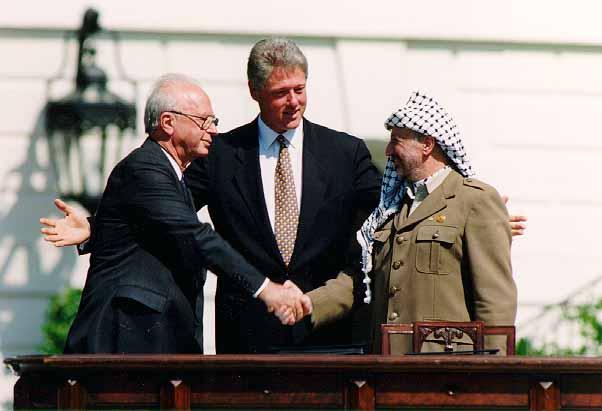 THE DEATH of Ron Pundak, one of the original Israeli architects of the 1993 Oslo agreement, brought that historic event back into the public eye.

Gideon Levy reminded us that the Rightist rabble-rousers, in their furious onslaught on the agreement, called the initiators “Oslo criminals”— a conscious echo of one of Adolf Hitler’s main slogans on his way to power. Nazi propaganda applied the term “November criminals” to the German statesmen who signed the 1918 armistice agreement that put an end to World War I— by the way, at the request of the army General Staff who had lost the war.

In his book, Mein Kampf (which is about to lose its copyright, so that anyone can print it again) Hitler also revealed another insight: that a lie will be believed if it is big enough, and if it is repeated often enough.

Oslo is dead, we are told. It actually died at birth. And by extension, this will be the lot of every peace agreement in the future. A large part of the Israeli public has come to believe this.

THE MAIN achievement of the Oslo agreement, an act of history-changing dimensions, bears the date of September 10, 1993— which happened to be my 70th birthday.

Today’s younger generation (on both sides) cannot realize the huge significance of these twin acts.

The Zionist denial was not an arbitrary quirk. The basic Zionist aim was to take hold of Palestine, all of it. This necessitated the displacement of the inhabitants of the country. But Zionism was an idealistic movement. Many of its East European activists were deeply imbued with the ideas of Lev Tolstoy and other utopian moralists. They could not face the fact that their utopia could only be realized on the ruins of another people. Therefore the denial was an absolute moral necessity.

Recognizing the existence of the Palestinian people was, therefore, a revolutionary act.

ON THE other side, recognition was even harder.

From the first day of the conflict, practically all Palestinians, and indeed almost all Arabs, looked upon the Zionists as an invading tribe that was out to rob them of their homeland, drive them out and build a robber-state on their ruins. The aim of the Palestinian national movement was therefore to demolish the Zionist state and throw the Jews into the sea, as their forefathers had thrown the last of the Crusaders quite literally from the quay of Acre.

And here came their revered leader, Yasser Arafat, and recognized the legality of Israel, reversing the ideology of a hundred years of struggle, in which the Palestinian people had lost most of their country and most of their homesteads.

In the Oslo agreement, signed three days later on the White House lawn, Arafat did something else, which has been completely ignored in Israel: he gave up 78% of historical Palestine. The man who actually signed the agreement was Mahmoud Abbas. I wonder if his hand shook when he signed this momentous concession, minutes before Rabin and Arafat shook hands.

Oslo did not die. In spite of the glaring faults of the agreement (“the best possible agreement in the worst possible situation,” as Arafat put it), it changed the nature of the conflict, though it did not change the conflict itself. The Palestinian Authority, the basic structure of the Palestinian State-in-the-Making, is a reality. Palestine is recognized by most countries and, at least partly, by the UN. The Two-State Solution, once the idea of a crazy fringe group, is today a world consensus. A quiet but real cooperation between Israel and Palestine is going on in many fields.

But, of course, all this is far from the reality of peace which many of us, including Ron Pundak, envisioned on that happily optimistic day, September 13, 1993. Just over twenty years later, the flames of conflict are blazing, and most people don’t dare to even utter the word “peace”, as if it were a pornographic abomination.

WHAT WENT wrong? Many Palestinians believe that Arafat’s historic concessions were premature, that he should not have made them before Israel had recognized the State of Palestine as the final aim.

Rabin changed his whole world-view at the age of 71 and took a historic decision, but he was not the man to follow through. He hesitated, wavered, and famously declared “there are no sacred dates”.

This slogan became the umbrella for breaking our obligations. The final agreement should have been signed in 1999. Long before that, four “safe passages” should have been opened between the West Bank and Gaza. By violating this obligation, Israel laid the foundation for the break-away of Gaza.

Israel also violated the obligation to implement the “third stage” of the withdrawal from the West Bank. “Area C” has now become practically a part of Israel, waiting for official annexation, which is demanded by right-wing parties.

There was no obligation under Oslo to release prisoners. But wisdom dictated it. The return of ten thousand prisoners home would have electrified the atmosphere. Instead, successive Israeli governments, both left and right, built settlements on Arab land at a frantic pace and took more prisoners.

The initial violations of the agreement and the dysfunctionality of the entire process encouraged the extremists on both sides. The Israeli extremists assassinated Rabin, and the Palestinian extremists started a campaign of murderous attacks.

LAST WEEK I already commented on our government's habit of abstaining from fulfilling signed obligations, whenever it thought that the national interest demanded it.

As a soldier in the 1948 war, I took part in the great offensive to open the way to the Negev, which had been cut off by the Egyptian army. This was done in violation of the cease-fire arranged by the UN. We used a simple ruse for putting the blame on the enemy.

The same technique was later used by Ariel Sharon to break the armistice on the Syrian front and provoke incidents there, in order to annex the so-called “demilitarized zones”. Still later, the memory of these incidents was used to annex the Golan Heights.

The start of Lebanon War I was a direct violation of the cease-fire arranged a year earlier by American diplomats. The pretext was flimsy as usual: an anti-PLO terrorist outfit had tried to assassinate the Israeli ambassador in London. When Prime Minister Menachem Begin was told by his Mossad chief that the assassins were enemies of the PLO, Begin famously answered: “For me, they are all PLO!”

As a matter of fact, Arafat had kept the cease-fire meticulously. Since he wanted to avoid an Israeli invasion, he had imposed his authority even on the opposition elements. For 11 months, not a single bullet was fired on that border. Yet when I spoke a few days ago with a former senior security official, he assured me seriously that “they shot at us every day. It was intolerable.”

After six days of war, a cease-fire was agreed. However, at that time our troops had not yet succeeded in surrounding Beirut. So Sharon broke the cease-fire to cut the vital Beirut-Damascus highway.

The present crisis in the “peace process” was caused by the Israeli government’s breaking its agreement to release Palestinian prisoners on a certain day. This violation was so blatant that it could not be hidden or explained away. It caused the famous “poof” of John Kerry.

In fact, Binyamin Netanyahu just did not dare to fulfil his obligation after he and his acolytes in the media had for weeks incited the public against the release of “murderers” with “blood on their hands”. Even on the so-called “centre-left”, voices were mute.

Now another mendacious narrative is taking shape before our eyes. The large majority in Israel is already totally convinced that the Palestinians had brought about the crisis by joining 15 international conventions. After this flagrant violation of the agreement, the Israeli government was right in its refusal to release the prisoners. The media have repeated this falsification of the course of events so often, that it has by now acquired the status of fact.

BACK TO the Oslo Criminals. I did not belong to them, though I visited Arafat in Tunis while the talks in Oslo were going on (unbeknownst to me), and talked with him about the whole range of possible compromises.

May Ron Pundak rest in peace— even though the peace he was working for still seems far away.

But come It will.