Why is it that instead of addressing the apprehensions of the protesters and putting in place all necessary safeguards to dispel their anxieties, the government has instead unleashed police terror? 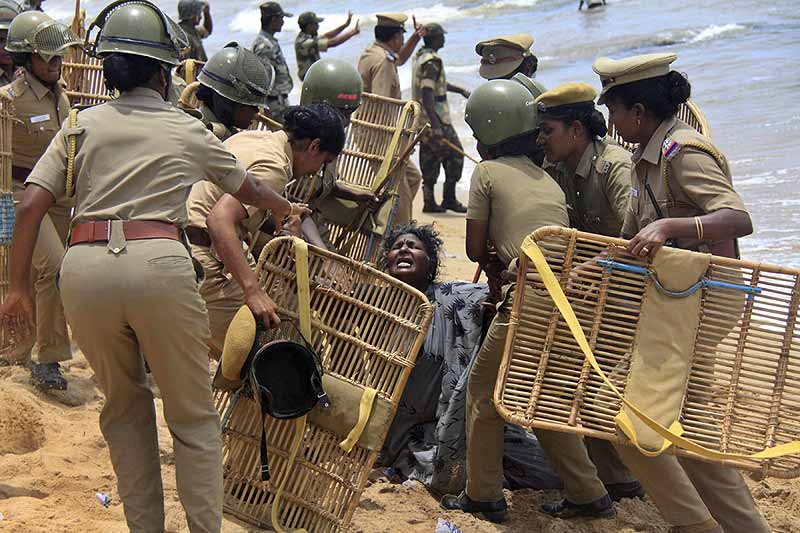 In a democracy, protest is a legitimate tool in the hands of the people to voice their concern and exert pressure on the government to effect a course correction when the path chosen by it is assessed as “against public interest”. The effect of a nuclear accident in India, a densely populated country could be disastrous with far reaching long term implications to the environment and the people. The Three Mile Island (1979), Chernobyl (1986) and Fukushima (2011) incidents have brought to the fore the risks involved in the business of nuclear power generation.

The Fukushima disaster has altered and enhanced mani fold the risk perception of a nuclear plant in the minds of the people. Like elsewhere in the world, people in rural India, around whose habitation nuclear power plants are proposed to be built, are apprehensive that the dangers of a nuclear disaster may far outweigh the gains of nuclear power generation. It is not without a reason that Germany, a technologically advanced country where nuclear energy accounts for 26 % of its power generation, has decided to do away with all its nuclear plants by 2022 based on a referendum. In US, notwithstanding the proposals for nearly 150 coal based power plants being dumped due to opposition from environmentalists, no nuclear power plant has been approved in the past three decades. Australia and New Zealand have said a firm no to nuclear power. This is despite Australia having large reserves of nuclear fissile material. Japan, which witnessed the Fukushima disaster and its aftermath live, is reported to have taken a decision to reduce its dependence on nuclear power in the short term and abandon it altogether in the long term.

Even with our technological awareness have we made a mistake?

The Indian government’s record of commitment to enforcement of safety regulations, disaster management, environmental safeguards and liability issues are dismal, and demoralizing, to say the least. The Bhopal gas tragedy in 1984 has proved beyond doubt the government's incompetence in handling crisis situations besides exposing its insensitive attitude towards the victims. In 1981, when a worker in the Union Carbide India Limited in Bhopal got splashed with Phosgene, he ripped off his mask in panic resulting in his death within 72 hours. This exposed the lack of safety training. Has this been catered for today? Safety norms were ignored in the belief that they would cut costs. Employees were fired and fined for protesting against deviation in safety norms. The governmental inspectors remained mute spectators to the eventual disaster in the making. Disposal of the plant waste, environmental cleaning up and rehabilitation measures were disregarded right from the time of disaster resulting in continued environmental and ground water pollution with inherent grave health problems and risks to the people. Till today, these issues have not been addressed. Even after 28 years, the 350 tons of toxic waste lying in the area have continued to remain as it was, posing a major threat to the lives of the people in the area. The German Company GIZ, that the government was hoping would undertake the job, has refused to embark on the disposal work.

The disaster management plans and the resources for the purpose do not appear to have been put in place or the plans rehearsed. The environmental clearance to the Kundankulam project was given in 1989, much before the Fukushima disaster, which only highlighted the enormity of the risks and effects of a nuclear disaster. Should the clearance not be reviewed before operationalising the plant and suitable measures instituted to ensure environmental safeguards? No one has said anything about the liability issues, leaving doubts of the Bhopal scenario being enacted in Kundankulam in the event of a disaster. The Russian supplier is not bound by the Civil Liability for Nuclear Damage Act, 2010 as the law which holds the operator liable for nuclear damages, limited to 500 crores, was enacted after 1988. The tax payer will therefore be required to meet the costs of damages, in case of a contingency, including other rehabilitation and cleaning up measures. Obviously the government must be planning to repeat the Bhopal gas tragedy compensation model. It is yet not known if the liability clause will be made applicable to all future suppliers.

Radioactive wastes are generated at all stages of power generation including mining, enrichment and power generation. No one seems to know anything about the government’s plan for waste management. Why this secrecy? If the government continues to remain uncommunicative on vital issues affecting the lives of the people, how does it expect the people to support them? Strangely, when the locals protest out of sheer fear and apprehensions, even the educated brand them as those funded by foreign interests. Why not try establishing a nuclear plant in and around Delhi and the country will see itself waking up to realities.

Forty years after the country’s first nuclear reactor commenced producing electricity, its capacity today is just about 4780 MW, constituting 2.77 % of the existing electricity generation capacity in the country. The Department of Atomic Energy (DAE) has been constantly revising their power generating capacity upwards without any basis. The Comptroller and Auditor General of India noted in its 1999 report, “Against the targeted additional power generation of 940 MW by 1995-96, gradually increasing to 7880 MW by 2001 AD, the actual additional generation of power under the profile as of March 1998 was nil in spite of having incurred an expenditure of 52.91 billion rupees.” Following the US-India nuclear deal, the DAE projected 470 GW electricity generating capacity by 2052 constituting twenty percent of the country’s total capacity. Considering DAE’s past performance, the uncertainties involved in the procurement of Plutonium, the cost and time factors involved, the projection appears unrealistic.

In the words of Admiral Hyman Rickover, the founder of the U.S. naval nuclear submarine program, his experiments with breeder reactors showed that they were “expensive to build, complex to operate, susceptible to prolong shutdown as a result of even minor malfunctions, and difficult and time-consuming to repair.” Considering the manifold risks and the cost factor would it be wise to go in for this unreliable technology especially after the Fukushima experience?

Electricity generation capacity in India which was 1800 MW in 1950 has risen to 172283 MW in 2011 while the contribution of the nuclear power generation has been a paltry 4780 MW. In 2002- 2003, DAE was allotted a budget of Rs 33.5 billion as against Rs 4.7 billion to the ministry of non- conventional energy sources which nourishes the solar, wind, small hydro and biomass based electricity. By 2006- 2007, the DAE budget allotment had gone up to Rs 55 billion without any substantial increase in power capacity. On the contrary, by 2011 the installed capacity of renewable sources had reached 18842 MW.

Overall costs of importing and commissioning plants, replenishment of nuclear fuel, long term waste management, environmental protection, safety measures, investments in disaster management resources, liability costs, and the costs of rehabilitating and compensating the people displaced from their areas are likely to force the state to subsidise nuclear power. Would it therefore not be prudent to carry out a realistic cost and benefit analysis right now and take the public into confidence on the issue?

No wonder the Kundankulam nuclear power plant scheduled to be commissioned in Dec 2011 met with stiff resistance from the locals. The tearing hurry with which the government went ahead with the loading of the fuel rods in one of the two reactors before implementing the 17 safety measures recommended by the expert panel is astounding to say the least. The process of fuel loading is irreversible and the contention of the government that the remaining recommendations could be implemented in due course of time is bizarre. It is anybody’s guess what this “in due course of time” meant. After a disaster had struck? If the safety measures are not required when the plant is operationalised and critical when else will they be required?

It is sad that the both the state and the central governments, instead of appreciating the people’s apprehensions and putting in place all the necessary safeguards to dispel their anxieties, had unleashed police terror besides filing 107 FIRs against 55795 peaceful anti-nuclear protesters and slapping “sedition” and “waging war against the state” charges against 6800 protesters. The government failed to recognize that the safety issues in the plant are a matter of public concern and interest. It is for the government to realize that the way forward is to implement all the safety measures, dispel the fear of the people by open and transparent dialogue, place in public domain the cost benefit analysis readings, and then proceed with operationalising the plant if the process indeed is safe and cost effective. If not, alternatives with practically no risk at much less cost are available to make India power sufficient. The haste is damaging the credibility of the government. The speculation indeed is that it is the slush money and foreign interests that are fuelling the momentum.

Brigadier (retd) V Mahalingam, has held varying command and staff appointments in his 35 years of Army service. He specializes in security related matters and is a leadership trainer. His areas of interest include national security, defence and security forces, governance, and politics.