"How can they make personal remarks in the House...Aap logon kay buraey din aayengay (Your bad days will come), I curse you," Jaya Bachchan said. 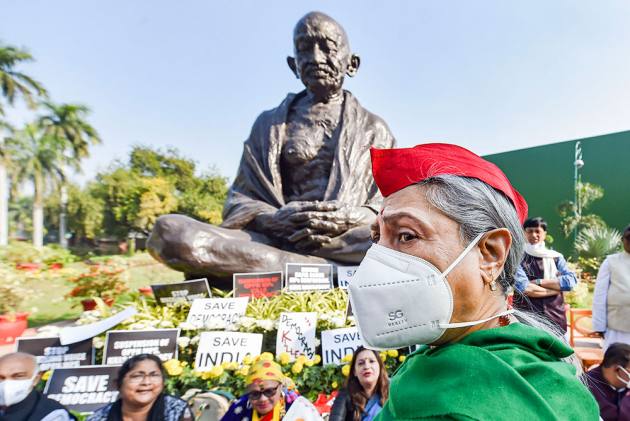 Disheartened by alleged "personal" remarks made against her, Samajwadi Party MP Jaya Bachchan lashed out at the ruling BJP in Rajya Sabha with a "curse" that it will face terrible days.

An agitated Bachchan also told the chair that he should be fair and alleged that an attempt was being made to stifle the voice of opposition.

Participating in the debate on NDPS (Amendment) Bill, Bachchan chose to raise the issue of the 12 suspended opposition members and said Bhubaneswar Kalita, who was in the chair, himself used to protest in the Well of the House. This evoked a sharp reaction from BJP members.

"I don't want to thank you because I don't know whether I should remember when you used to walk into the Well shouting...or today when you are sitting in the chair," she said when called to speak on the bill.

Objecting to her remarks, Rakesh Sinha (BJP) said she was casting aspersions on the chair. But Bachchan continued her speech and lamented that at a time when the country is facing several important issues, the House has allocated 3-4 hours for a debate on rectifying a "clerical error" in the Bill.

Amid the din, she alleged that personal remarks were made against her and sought protection from the chair. "I expect you to take action on the comment he made on me and my career. You want to be fair. You are sitting on the chair, you don't belong to any party, sir," she said.

The remarks claimed by Bachchan as "personal" could not be heard in the noise.

Leaders of the BJP and the SP have been attacking each other as the crucial elections in Uttar Pradesh are due early next year.

Bachchan's outburst came on a day her daughter-in-law and actor Aishwarya Rai Bachchan appeared before the Enforcement Directorate for questioning in a case linked to the 2016 'Panama Papers' global tax leaks case.

Her statement was being recorded under the provisions of the Foreign Exchange Management Act (FEMA), official sources said.

The SP has accused the Centre of targeting its leaders due to political vendetta, a charge denied by the BJP.

Kalita repeatedly urged Bachchan to confine herself to the Bill being debated. She responded by saying that efforts were being made to stifle the voice of opposition members.

Kalita said that the chair would go through the records and remove unparliamentary remarks, if any.

The chair meanwhile called the next member to speak on the Bill, but soon after adjourned the House for 30 minutes because of the continuous din.