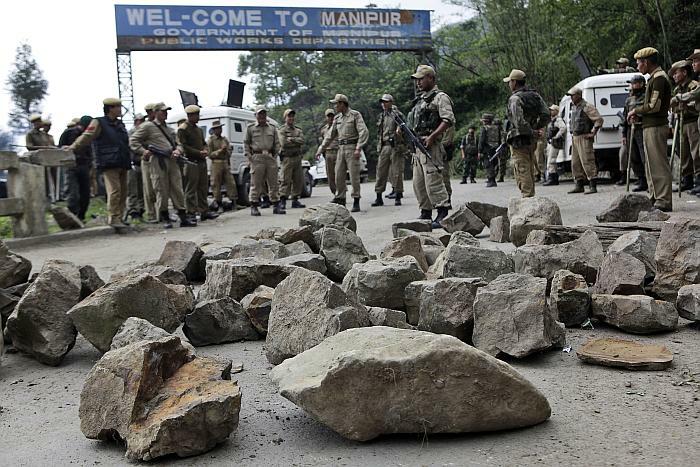 A Suspension of Operations (SoO) agreement between the Kuki armed groups and the union government was signed in August 2005, but has done little to contain violence by these groups. While the agreement with Kuki National Organisation (KNO) and the United People’s Front (UPF), two umbrella organisations of as many as 19 militant groups, continues to hold, the conflict simmers on, with little progress in resolving the Kuki militancy in the Manipur Hills.

The violence unleashed by the Kuki armed groups in Manipur has registered an irregular trajectory in 2005-2010 with sharp increase in the years 2007 and 2008. Despite a subsequent deceleration, the overwhelming fratricidal violence remains well above the 2005-06 level.

‘Area domination’ exercise carried out by warring Kuki groups, primarily in the Hills region, have resulted in relentless internecine clashes, almost across the state of Manipur. In a total of 136 Kuki-related insurgent fatalities, at least 69 Kuki insurgents were killed and 16 others wounded in some 29 factional clashes in Senapati, Churachandpur, Chandel and Ukhrul districts in the Hills and Imphal East and Thoubal districts in the valley through 2005-2010 (till June 6). While Senapti was the worst affected district, with 16 recorded clashes, Churachandpur reported nine clashes, while there was one each in Chandel, Ukhrul, Imphal East and Thoubal.

The worst of the intra-Kuki clashes since 2005 include:

July 24, 2007: At least 10 Kuki Liberation Army (KLA) militants were killed in a clash between Bongbal and Rongyang under Yairipok Police Station in Thoubal district.

May 29, 2007: The Zougam faction of the Kuki National Front (KNF) killed five of its cadres, who deserted the outfit's camp at T. Bijang in Churachandpur district.

March 13, 2007: Six Kuki National Army (KNA) militants were killed and another injured in a factional fight with the KNF at Phaijang village in Senapati district.

May 25, 2008: Four KLA militants and one KRA cadre were killed during an internecine clash at New Saikhul under Saikhul Police Station in Senapati district.

This fratricide has even spread far beyond the state’s territory. On November 12, 2007, for instance, the KRA ‘commander-in-chief’, Thangkeng Hangshing, was killed by alleged cadres of the rival Kuki Revolutionary Army-Unification at his brother’s residence at Sriniwaspuri in the national capital, Delhi.

The ethnic rivalry between Nagas and Kukis adds another lethal dimension to the turf wars in the Manipur Hills. While the large-scale massacres of the early 1990s have not recurred, the faultlines of a festering conflict have remained intact. In the first week of May 2010, the apex community group of the Kuki tribe, the Kuki Inpi Manipur (KIM), sent an open letter to Prime Minister Manmohan Singh saying the Kuki people also opposed National Socialist Council of Nagaland-Isak-Muivah (NSCN-IM) general secretary Thuingaleng Muivah’s visit to his native village, Somdal, in Manipur’s Ukhrul district [Tamenglong, Senapati, Ukhrul and Chandel districts figure in the projected territory of Nagalim (Greater Nagaland) conceived of by the NSCN-IM]. The KIM letter stated,

"His proponents may call him the ‘champion of peace in South East Asia, but he is a Champion of Peace because he was killing over 900 Kukis, uprooting 350 Kuki Villages and rendering over 100,000 Kukis refugees in their own land during the 1990s? (sic)."

Though Muivah was forced to defer his visit to his birth place due to the Manipur government’s decision not to allow him to enter the state and a subsequent intervention by the Union government, the stalemate still persists, with the Naga insurgent leader insisting that he will go ahead with his visit. Violent protests and counter protests have virtually paralysed normal life across Manipur.

Meanwhile, the Manipur Hills have, over the years, continued to witness sporadic clashes between Naga and Kuki insurgent groups. At least 14 Kuki insurgents were killed by NSCN-IM militants in three clashes in Ukhrul and Tamenglong districts since 2005. In a major confrontation on September 3, 2007, at least 12 KLA cadres were killed by the NSCN-IM in a forest near Tangkhul Hundung Khunou under the Litan Police Station in Ukhrul district. KLA cadres had earlier hijacked two passenger vehicles from the Maphou Dam area. The clash ensued following the KLA militants’ violation of an ‘understanding’ between the outfits not to intrude into each others’ area of operation without prior information. In retaliation, on September 8, 2007, five NSCN-IM militants were shot dead by suspected KLA cadres between Jotsoma and Khonoma in the Kohima district of Nagaland.

Almost five years of cease-fire have failed to curb extortion and other insurgency-related offences committed by the Kuki militants across Manipur. The Kuki groups continue to extract ‘levies’ and ransoms from residents and transients over the years, targeting government offices and beneficiaries, educational institutions, commercial establishments, transport agencies, and the wider civilian population alike. According to partial data compiled by the South Asia Terrorism Portal, at least 56 extortion cases have been ascribed to various Kuki armed groups since 2005 (a preponderance of such cases go unreported). Manipur Legislator Morung Makunga, on March 10, 2010, confirmed, in the state Legislative Assembly, that militant groups under the truce were not in compliance with the conditions laid down under the SoO agreements, and that such agreements should, consequently, be suspended. The minister disclosed that Kuki armed groups had been collecting as much as 50 per cent of the compensation given by the government to land owners at the Integrated Check Post (ICP) at Moreh town in Chandel district along the India-Myanmar border in the Hills. This is confirmed by a trickle of refugees who have fled Moreh under threat of extortion, or of reprisals for refusal to pay.

The Kuki insurgents’ forays outside the Hills have provoked incidents of occasional public protest and even vigilantism in the Valley. In one such incident, on December 22, 2009, two alleged cadres belonging to Prithvi faction of the KNF were reportedly lynched at Nongbrang in Thoubal district. Three women were injured in the attack. Police subsequently clarified that the two persons who were lynched were students belonging to the Kuki community.

On May 24, 2010, employees of the Manipur Sericulture Department demonstrated in front of their office, in protest against the May 20, 2010, abduction of a senior official of their department by cadres belonging to the Military Council faction of the United Kuki Liberation Army at Sangaipat in Imphal East district, for his department’s failure to meet the demand of INR five million. The group had reportedly made the demand nearly a year earlier. Subsequent to the abduction, the outfit had raised its demand to INR ten million. While the Police are yet to trace the abducted official, the Kuki group has denied involvement in his abduction.

The South Asia Terrorism Portal database records that 133 cadres belonging to various Kuki groups have been neutralized by Security Forces (SFs) in Manipur since 2005. While 105 Kuki militants were arrested in 61 search operations, 28 militants were killed in at least 23 standoffs with the SFs. Two civilians and three SF personnel were also killed in these confrontations.

There are 11 designated camps constructed for the cadres of the Kuki outfits under the SoO agreement, in the Manipur Hills. Periodic meetings of the KNO and UPF, representing the Kuki groups, and the Manipur and union government, have been held in capital Imphal, the most recent of these on March 25, 2010. However, the KNA, a signatory to the SoO agreement, had declared, in January 2010, its objective of creating an autonomous Kuki state under the relevant articles and provisions of the Indian Constitution. Similarly, the KNF, another signatory to the SoO agreement, raised the demand of separate state for Kukis within the Constitution of India before the Union Home Secretary G.K. Pillai during his visit to Manipur on February 26, 2010.

With little evidence of tribal reconciliation in Manipur, fratricidal turf wars and continuous criminal activities by Kuki groupings even under the cease-fire, there is little possibility of substantive resolution of the Kuki conflict. The collapse of governance in the state and the enveloping milieu of violence can only enormously compound a perverse dynamic that has birthed scores of insurgent groups in this tiny state of 2.4 million people.