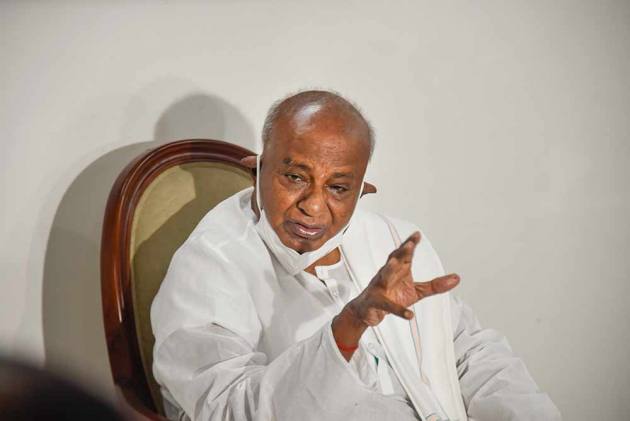 This marks the entry of the 8th member from the Gowda family into politics.
Suraj's father H D Revanna is a former minister and MLA from Holenarsipura, while his mother Bhavani was a member of the Hassan Zilla Panchayat, and brother Prajwal is Member of Parliament from Hassan Lok Sabha segment.

Gowda, who is the JD(S) supremo, is also Member of Rajya Sabha from Karnataka, while his other son H D Kumaraswamy is a former CM and MLA from Channapatna. Kumaraswamy's wife Anitha is MLA from Ramanagara segment, and his son Nikhil, who is the JD(S) youth wing President, had unsuccessfully contested the 2019 Lok Sabha polls from Mandya.

If Suraj wins this poll from Hassan, the Gowda family will have its members in all the four major houses of public representatives- Lok Sabha, Rajya Sabha, Legislative Assembly and Legislative Council.

The biennial election to the Karnataka Legislative Council from 20 Local Authorities' Constituencies for 25 seats, due to retirement of sitting members, will be held on December 10.

Speaking to reporters after the list of candidates were released, H D Kumaraswamy said the party has fielded candidates only in select seven seats, as it cannot concentrate on all the seats, in the short period of time.

"Based on the suggestions from our local leaders and workers, we have decided to field candidates for seven MLC seats. We wanted to contest only in these seats, give a fight and see to it that we win them. Last time we won in four seats and this time, our aim is to increase that tally," he said.

The election is necessitated as the term of office of the 25 MLCs is going to end on January 5, 2022. The BJP and Congress have already announced their candidates.