Outrages in Paris and Copenhagen have nothing to do with anti-Semitism. 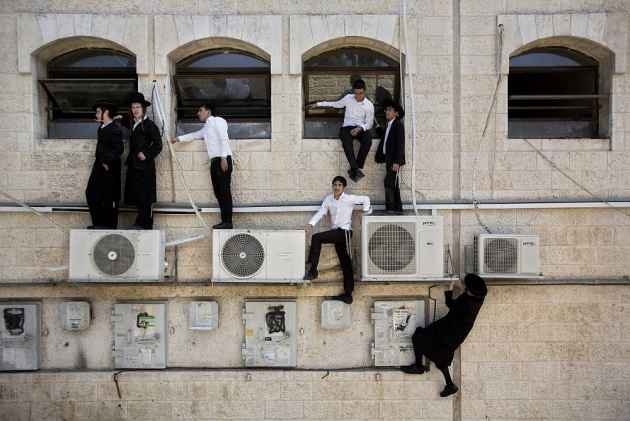 ANTI-SEMITISM is on the rise. All over Europe it is raising its ugly head. Jews are in danger everywhere. They must make haste and come home to Israel before it is too late.

PRACTICALLY ALL the alarming incidents which have taken place in Europe recently – especially in Paris and Copenhagen – in which Jews were killed or attacked – had nothing to do with anti-Semitism.

All these outrages were conducted by young Muslims, mostly of Arab descent. They were part of the ongoing war between Israelis and Arabs that has nothing to do with anti-Semitism. They are not descended from the pogrom in Kishinev and not related to the Protocols of the Elders of Zion.

In theory, Arab anti-Semitism is an oxymoron, since Arabs are Semites. Indeed, Arabs may be more Semitic then Jews, because Jews have mingled for many centuries with Gentiles.

But, of course, the German publicist Wilhelm Marr, who probably invented the term Antisemitismus in 1880 (after inventing the term Semitismus seven years earlier) never met an Arab in his life. For him the only Semites were Jews, and his crusade was solely against them.

(Adolf Hitler, who took his racism seriously, applied it to all Semites. He could not stand Arabs either. Contrary to legend, he disliked the Grand Mufti of Jerusalem, Haj Amin al-Husseini, who had fled to Germany. After meeting him once for a photo-opportunity arranged by the Nazi propaganda machine, he never agreed to meet him again.)

SO WHY do young Muslims in Europe shoot Jews, after killing cartoonists who have insulted The Prophet?

Experts say that the basic reason is their profound hatred for their host countries, in which they feel (quite rightly) that they are despised, humiliated and discriminated against. In countries like France, Belgium, Denmark and many others, their violent rage needs an outlet.

But why the Jews?

There are at least two main reasons:

The first is local. French Muslims are mostly immigrants from North Africa. During the desperate struggle for Algerian independence, almost all the Algerian Jews sided with the colonialist regime against the local freedom fighters. When all Jews and many Arabs emigrated from Algeria to France, they brought their fight with them. Since they now live side by side in the crowded ghettos around Paris and elsewhere, their mutual hatred lives on and often leads to violence.

The second reason is the ongoing Arab-Zionist conflict, which started with the mass immigration of Jews to Arab Palestine, continued with the long list of wars and is now in full bloom. Practically every Arab in the world, and most Muslims are emotionally involved in the conflict.

But what have French Jews to do with that far-away conflict? Everything.

When Binyamin Netanyahu does not miss an opportunity to declare that he represents all the Jews in the world, he makes all the world's Jews responsible for Israeli policies and actions.

When Jewish institutions in France, the US and everywhere totally and uncritically identify with the policies and operations of Israel, such as the recent Gaza war, they turn themselves voluntarily into potential victims of revenge actions. The French Jewish leadership, CRIF, did so just now.

Neither of these reasons has anything to do with anti-Semitism.

ANTI-SEMITISM is an integral part of European culture.

Many theories have been put forward to explain this totally illogical phenomenon, which borders on a collective mental disease.

My own preferred theory is religious. All over Europe, and now also in the Americas, Christian children in their formative years hear the stories of the New Testament. They learn that a Jewish mob was shouting for the blood of Jesus, the gentle and mild preacher, while the Roman prefect, Pontius Pilatus, was desperately trying to save his life. The Roman is depicted as a humane, likeable person, while the Jews are seen as a vile, despicable mob.

This story cannot be true. Roman rulers all over the Empire used to crucify potential troublemakers. The behavior of the Jewish authorities in the story does not conform to Jewish law. But the New Testament story, written long after the death of Jesus (whose real Hebrew name was Jeshua), was aimed at the Roman audience the Christians were trying to convert, in hot competition with the Jewish missionaries.

Also, the early Christians were a small, persecuted sect in Jewish Jerusalem, and their grudge lives on to this very day.

The picture of the evil Jews crying out for the death of Jesus is unconsciously imprinted in the minds of the Christian multitudes and has inspired Jew-hatred in every new generation. The results were slaughter, mass-expulsions, inquisition, persecution in every form, pogroms, and finally the Holocaust.

THERE has never been anything like this in Muslim history.

The Prophet had some small wars with neighboring Jewish tribes, but the Koran contains strict instructions on how to deal with Jews and Christians, the People of the Book. They had to be reated fairly and were exempted from military duty in return for a poll tax. Throughout the ages there were some rare anti-Jewish (and anti-Christian) outbreaks here and there, but Jews in Muslim lands fared incomparably better than in Christian ones.

If this had not been so, there would have been no "Golden Age" of Muslim-Jewish cultural symbiosis in medieval Spain. It would have been impossible for the Muslim Ottoman empire to accept and absorb almost all the hundreds of thousands of Jewish refugees from medieval Spain, driven out by their Catholic Majesties, Ferdinand and Isabella. The outstanding Jewish religious thinker, Moses Maimonides (the "Rambam") could not have become the personal physician and adviser of the outstanding Muslim sultan, Salah-al-Din al-Ayubi (Saladin).

The present conflict started as a clash between two national movements, Jewish Zionism and secular Arab nationalism, and had only slight religious overtones. As my friends and I have warned many times, it is now turning into a religious conflict – a calamity with potentially grievous consequences.

Nothing to do with anti-Semitism.

SO WHY does the entire Israeli propaganda machine, including all Israeli media, insist that Europe is experiencing a catastrophic rise of anti-Semitism? In order to call upon European Jews to come to Israel (in Zionist terminology: "make Aliya").

For a Zionist true believer, every Jew's arrival in Israel is an ideological victory. Never mind that once in Israel, new immigrants – especially from countries like Ethiopia and Ukraine – are neglected. As I have frequently quoted: "Israelis like immigration but don't like immigrants".

In the wake of the recent events in Paris and Copenhagen, Binyamin Netanyahu has publicly called upon French and Danish Jews to pack up and come at once to Israel for their own safety. The prime ministers of both countries have furiously protested against these calls, which insinuate that they are unable or unwilling to protect their own citizens. I suppose that no leader likes a foreign politician to call upon his citizens to leave.

There is something grotesque in this call: as the late Professor Yeshayahu Leibowitz remarked, Israel is the only place in the world where Jewish lives are in constant danger. With a war every few years and violent incidents almost every day, he had a point.

But in the wake of the dramatic events, many "French" Jews – originally from North Africa – may be induced to leave France. They may not all come to Israel. The US, French Canada and Australia offer tempting alternatives.

There are many good reasons for a Jew to come to Israel: a mild climate, the Hebrew language, living among fellow Jews, and what not. But running away from anti-Semites is not one of them.

IS THERE real anti-Semitism in Europe? I assume that there is.

In many European countries there are old and new super-nationalist groups, who try to attract the masses by hatred of the Other. Jews are the Others par excellence (along with Gypsies/Roma). An ethno-religious group dispersed in many countries, belonging and not belonging to their host countries, with foreign - and therefore sinister – beliefs and rituals. All the European nationalist movements which sprang up in the 19th and 20th centuries were more or less anti-Semitic.

Jews have always been, and still are, the ideal scapegoat for the European poor. It was the German (non-Jewish) socialist August Bebel who said that "anti-Semitism is the socialism of the stupid guys".

With frequent economic slumps and a widening gap between the local poor and the multinational super-rich, the need for scapegoats is rising. But I do not believe that these marginal groups, even if some of them are not so marginal anymore, constitute a real anti-Semitic surge.

Be that as it may, the outrages in Paris and Copenhagen have nothing to do with anti-Semitism.