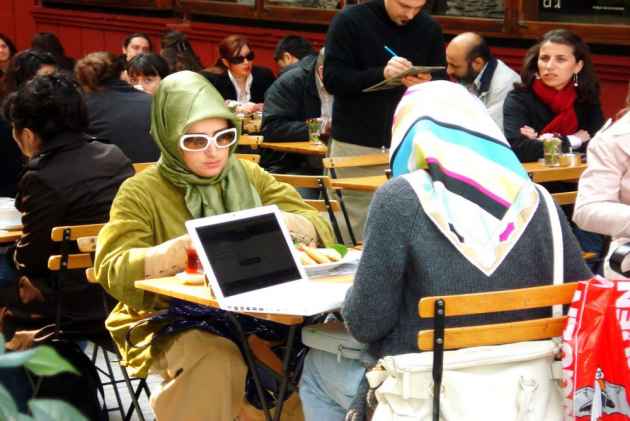 Two years in a row, in the opening lecture of a class called ‘What is Modernity?’ that I teach at a start-up liberal arts university in Karachi as part of the freshman core curriculum, I asked the assembled cohort of eager students how many of them thought they were modern. My intent, once they had all raised their hands, was to show the importance of investigating the idea of the ‘modern’ as an essential aspect of our sense of ourselves, a peculiar part of our modern identities that by self-definition, sets us apart from all peoples of the pre-modern past. To my utter surprise, out of the roughly one hundred and fifty students who sat there each time, no more than two or three tentatively lifted their hands.

Here’s the scene: all but all of them are in modern apparel, including the women who make up half of each cohort, and who are dressed either in Western clothes, some fashionable version of ‘traditional’ attire, or some combination of both, with a minority of each set wearing the hijab, itself often quite chique, the ensemble at times designed more for frisson than modesty. They are armed to a soul with smartphones if not laptops, and are conversing and being instructed in complex collegiate English. They are, of course, in the second decade of the 21st century, in a city that is among the top ten globally most populous, as well as the economic and financial capital of the sixth largest country in the world. What’s more, they are in a ‘smart’ lecture hall at one of the most elite, state-of-the-art institutions in the nation.

Talk about cognitive dissonance. I was so shocked I tried it again the next year, and was still taken aback when the same thing happened. First time around, my teaching strategy foiled, I asked them testily, if they weren’t modern, what did they think they were: ‘savages’? Awkward silence. Evidently, for all the extraordinary investment in becoming modern, it remained only ever an impossible aspiration, never penetrating their sense of who they are, never touching their essential identities. How is this possible?

As a teacher, this concerns me urgently as part of the terrible and vast landscape of cognitive disrepair in which young people are today globally embedded, even if in different ways, as they attempt to understand and confront the extraordinary challenges of the deeply troubled world they are to inherit. I was unfair to taunt my students. At the most general level, their cognitive dissonance is a direct effect of what one might call the apartheid global cartography of modernity, whereby different parts of the geographical world appear simultaneously at different co-ordinates on another imaginary map of time and history that is shot through with racist assumptions. Anthropologists have complained bitterly about this state of affairs, but some historians too are sensitive to the cognitive distortions occasioned by this racist modern distribution of the globe and time, as are some other humanists.

By this map, Pakistanis are by definition not modern since Pakistan is not yet so – it is part of the ‘developing’ region of South Asia, indeed in some ways one of its most ‘underdeveloped’ areas. How South Asia got there, indeed how Pakistan came into existence – the astonishing story of how a region of historic plenitude, as much in material and intellectual wealth as in its plurality of co-existence, became the embodiment of devastating poverty, incorrigible immiseration and fratricidal national identities in the modern period – does not figure on this bizarre map, at once spatial and temporal, that remains for all its strangeness, utterly real.

Part of the cognitive difficulty arises from the fact that any serious investigation of the modern history of South Asia, as of other postcolonial regions, immediately implicates colonialism, since the two – modernity and colonialism – coincide. From there, one is immediately confronted with the suspicion that one is ‘blaming the West’. It is a strange effect of the apartheid nature of the modern colonial state that despite centuries of association – indeed of the most intimate kind, that of ruler and ruled – the ‘West’ remains a people and a world apart and other to its colonies. In fact, the reference to colonialism is simply a matter of chronological necessity, of historical reason: how else is one to investigate the proximate historical formation of South Asia in the second half of the 20th century without turning to the first, and thence to the 19th? Much as one would prefer, one cannot, alas, just wish history away.

My students are, moreover, part of the ‘Islamic world’, which burdens them with another set of cognitive distortions. Perhaps even more world-transforming than the material mutation of South Asia in the modern period is its cognitive and cultural metamorphosis. Is it not remarkable that before the last quarter or so of the 19th century, there are no books to be found in the native languages with the word ‘Islam’ in their titles? Or that no reference is available until this time to ‘Islamic history’, or to the ‘Islamic world’ (a concrete geographical population that is forever in the news, as opposed to the rarely referenced, abstract ecclesiastical community of the umma of old that called more for an ethical orientation than political allegiance)? These modern expressions and ways of speaking are now all a part of our dissonant cognitive maps inside and outside the region. A world-altering transformation of sensibility is implied therein.

Cognitive dissonance also ensues from the lack of understanding of what modernity actually entailed. Through modern knowledge, its new categories, methods and priorities, as well as the tools of modern government such as censuses, population surveys, publications, separate electorates, quotas, and educational institutions, modern colonialism changed the way people thought about their languages, cultures and religions, as much in themselves as in their relationships to each other, a transformation that continues to unfold under the watch of nationalism. Is it not stunning, for instance, that in Malaysia today there is a law of recent provenance that forbids non-Muslims from saying ‘Allah’, whereas there is no precedent for such a measure in fourteen hundred years of ‘Islamic history’? Or that after centuries of bidding each other farewell by saying ‘khuda hafiz’ – combining the Persian word for God, ‘khuda’ with the Arabic ‘hafiz’ for protector, to entrust each other to divine care as we part – South Asian Muslims fervently turned in the late 20th century to ‘Allah hafiz’ for much the same reason as in Malaysia?

Poignantly, both are ignorant of the simple fact that ‘Allah’ cannot be thought as the proper name of God – for it is not one word, but two: ‘al-lah’, literally ‘the Divine’, and so is used by all Arabic-speaking peoples, irrespective of denomination. Both rely on the related modern assumption that Allah is the God of the Muslims – a theological solecism that flatly contradicts the Quran’s very opening lines, where God’s divinity is affirmed to lie in universal mercy and beneficent lordship over all creatures and communities, over the total plurality of worlds.

Even more fundamentally in terms of cognitive basis, these strange developments are the late and unfolding legacy of colonial rule. For they rest on the assumption that Arabic is the language of ‘Islam’ (as if it’s perfectly obvious that all faiths possess each their own natural language – except Christianity of course, which is universal), that ‘Islam’ is a ‘Semitic religion’, the ethnic religion of the Arabs – all totally modern and imperial concepts that afflict all Muslim communities today with profound and terrible consequences. And it is a catastrophic corollary of the same historically unprecedented logic of modern ethno-linguistic and national religious identities that the contemplative aspect of Islam, Sufism, is now thought to be peculiar to its ‘Indian’ and ‘Iranian’ (in either case, ‘Aryan’) milieus, thus separate from Islam’s Arab/Semitic essence, a view that defies all empirical evidence, historical and contemporary. What better cognitive ground for the denial and destruction of Sufism that we are witnessing today?

These are merely a small sample of simple historical facts that are of utmost significance for our present, but that are now difficult to recognize because of the deeply distorted cognitive maps that we have all globally inherited from colonialism in the modern period. If we do not re-orient these maps, and if we do not strenuously transform our curricula and our pedagogies, we cannot find the lost pasts that we need for a future less perilous than our present.

(The author is the Director of the Comparative Liberal Studies program, and was the founding Dean of the School of Arts, Humanities and Social Sciences and Director of the Liberal Core Curriculum, at Habib University in Karachi, Pakistan)