Anybody Who Creates Violence Will Be Neutralised: Bipin Rawat

Rawat, who was on a two-day visit to Pathankot, presided over a conclave of disabled soldiers in Pathankot. 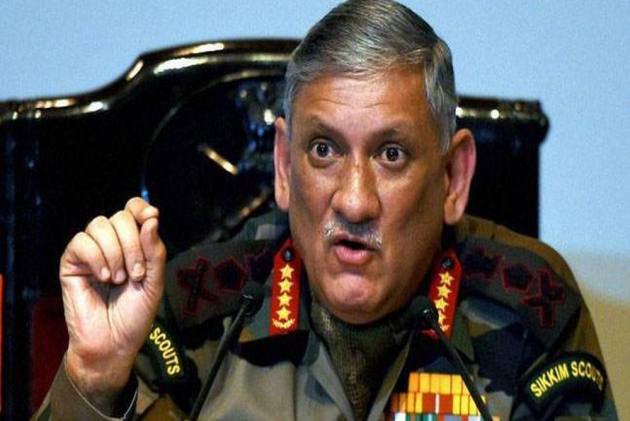 Army chief Bipin Rawat on Monday said that those triggering terrorism in Kashmir will be neutralised.

Rawat added that infiltration was going on from across the Line of Control in Jammu and Kashmir.

"The government has a clear cut policy that it will not allow terrorists to create violence. Anybody who creates violence will be neutralised," he told reporters in Pathankot.

Rawat, who was on a two-day visit to Pathankot, presided over a conclave of disabled soldiers in Pathankot.

"Our focus is terrorists in the valley. The basic aim of the Army is to ensure that young boys do not join militancy," he said.

Rawat said the Army's aim was that it approached the youth's family and told them that they could ask the youth to surrender as it was still giving them a chance.

"Then if the people still do not behave and continue with violence, then the alternative left (with us) is to neutralise them," the Army chief said.

Asked whether India is following a tit-for-tat policy towards Pakistan, which was resulting in many casualties, Rawat said the policy keeps on changing.

"See we have to keep changing the policy...We have keep doing something different. It has to be reviewed so that we keep ahead of adversary," he said, adding that it had to be more than a tit-for-tat policy.

He said what the Indian Army was doing along the LoC was not being put into public domain and they were doing more than Pakistan.

The Army chief said Pakistan kept sending terrorists to cause damage and ultimately it led to violence against the people.

"Kashmiris are our people. We have to look after them," he said, adding Jammu, Kashmir and Ladakh regions were part of the country and violence would not be allowed there.

On sniping, Rawat said it was a regular affair and there was nothing new in it.

"Pakistan have got snipers and India also has snipers. It is subject to exposure of any soldier. Our drills should be good and we have to ensure that we do not give them any opportunity to snipe at us," he said.

On former chief minister Omar Abdullah and Kashmiri politicians advocating for dialogue instead of muscular policy, Rawat said the government had a clear policy that it would not allow terrorist to create violence. He said it had already initiated dialogue through an interlocutor with the people.

"The government has tasked an interlocutor to speak to the people in valley. Dineshwar Sharma is saying that he is open to everybody and those interested in talking to him can come up and speak to him," he added.

"I don't understand who is saying talks are not going on. Sharma is the government's interlocutor. If the people are not listening to him, what can he do," he asked.

He said they were holding indirect talks to see if they could approach stakeholders.

"What makes us think that necessary action by the government is not being taken to bring people into mainstream", Rawat questioned.

He said infiltration attempts were being made from across the border but the Army was out to foil them.