On January 1 last year, Gen Rawat took charge as India's first CDS with a mandate to bring in convergence in the functioning of the Army, the Navy and the Indian Air Force and bolster the country's overall military prowess. 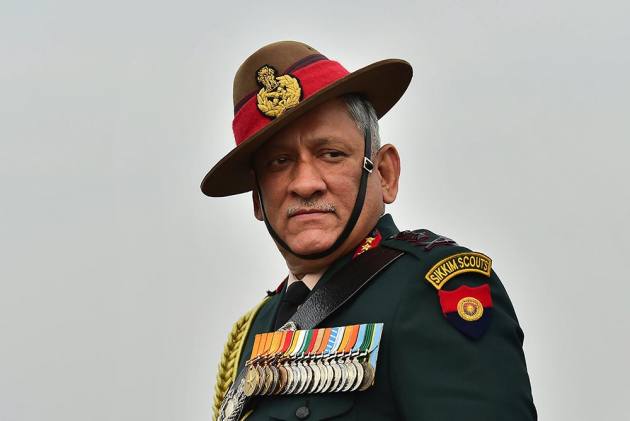 "Apne Senao par hei hame garv, aao milkar manaye Vijay Parv (We are proud of our armies, let's celebrate victory together)" was the last public message by Chief of Defence Staff Gen Bipin Rawat, a day before his death in a helicopter crash.

The Indian Army on Sunday released a 1.09-minute video clip in which Gen Rawat greeted the armed forces personnel on the occasion of the 50th anniversary of the 1971 war and paid tributes to the fallen heroes. Army sources said the video was recorded on the evening of December 7. Gen Rawat, his wife and his Defence Adviser Brigadier LS Lidder were among the 13 people killed in the horrific helicopter crash at 12:22 pm on December 8 near Coonoor.

In the video clip, Gen Rawat paid glowing tributes to the Indian armed forces personnel killed in the 1971 war with Pakistan and appealed to the citizens to join the celebrations of the 50th anniversary of the victory.

The video was also played at the inaugural event of the 'Vijay Parv' celebrations at the Indian Gate complex. The event was attended by Defence Minister Rajnath Singh and the top military brass of the country.

Around 93,000 Pakistani troops had surrendered before the joint forces of the Indian Army and the "Mukti Bahini" on December 16, 1971, that paved way for the birth of Bangladesh."I am extending heartfelt greetings to all the brave soldiers of Indian armed forces on the occasion of Swarnim Vijay Parv. We are celebrating the 50th anniversary of the victory in the 1971 war as the Vijay Parv," Gen Rawat said.

India is organising a series of events to mark the stupendous victory of India over Pakistan in the war 50 years ago. "I am paying my tributes to our brave soldiers on this occasion, remembering their sacrifices. Several events are being organised at the India Gate between December 12 and 14. It is a matter of great pride that Vijay Parv is being organised at the Amar Jawan Jyoti complex which was established in memory of our brave soldiers," Gen Rawat said in the message. "We invite all countrymen to participate in the Vijay Parv," he said. He ended by saying: "Apne Senao par hei hame garv, aao milkar manaye Vijay Parv."

On January 1 last year, Gen Rawat took charge as India's first CDS with a mandate to bring in convergence in the functioning of the Army, the Navy and the Indian Air Force and bolster the country's overall military prowess. In the last two years, Gen Rawat carried out the extensive groundwork to roll out tri-services reforms.

Known to be forthright, fearless, and blunt at times, the outstanding military commander ruffled many feathers with his controversial remarks during his tenure as the Army Chief as well as Chief of Defence Staff. In his role as Chief of Army Chief between 2016 and 2019, he strongly backed a policy of hot pursuit in dealing with cross-border terrorism and militancy in Jammu and Kashmir.