In a Video going viral on Whatsapp, army cadets are seen battering their juniors as part of what seems like an 'exercise' 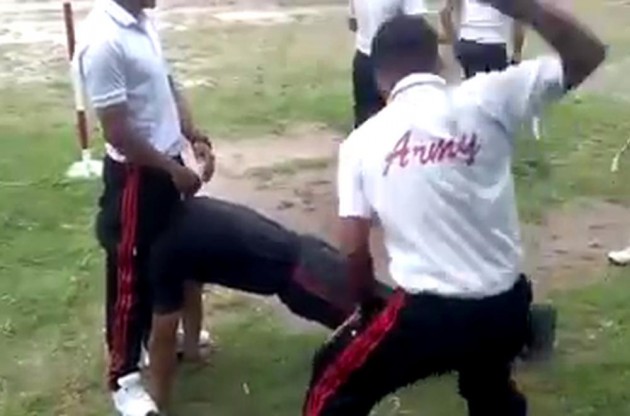 After a video where army cadets are seen being beaten up by seniors as part of a toughening-up 'exercise' went viral, the Army has clarified that action has been taken against the assaulters.

In the video, a junior cadet walks ala a sheep and positions himself into a push-up pose. His neck is locked in between the knees of a senior, as in a guillotine. Two other seniors flank the junior with a cane and a whip in their hands, aiming at the junior’s buttocks which are taut in the anticipation of pain.

Suddenly, their hands move up and down rhythmically, trashing the backs of cadets as if it they were venomous snakes that sneaked into a home. The junior writhes in pain, all the while trying hard to extricate his head out of the knee-lock unsuccessfully. After a round of around twenty beatings, they let him go. The he squirrels away to join the file. Then another in the queue places his head into the lock and the cycle of punishment continues.

The video of unofficial beasting was likely shot at a regimental training centre that grooms cadets  who pass out of the Indian Military Academy in Dehradun or the Officer Training Academy in Chennai. Based on the regiment a young officer is assigned to, s/he will report to one of the 46 regimental training centres for acclimatization course that spans over 6 months. But the vintage of the video is not clear.

Without revealing the details of where and when the incident happened, the Additional Directorate General of Public Information, IHQ of MoD (Army), issued a clarification on Twitter:

A Major-rank officer who has been in the army for the past 5 years said such methods were employed unofficially by senior cadets to transform awkward, unfocused teenagers into confident soldiers.

“It was certainly practised in the Army at least before 2012. It has been put to an end; at least I have never faced it or seen it. The Army is more civilized with this cadets now unlike 10 years ago when trainers had a free hand to boot or trash cadets while training them.”

“Now, if a complaint of assault ever comes up, the assaulter can kiss his career good bye.”

But army has had practices that may sound barbarous to the world outside the academy walls. One such military jargon is Kambal Parade,when a group of cadets covers a sleeping man with a blanket and beats him up – to protect their identity and minimize injury marks.

The officer said: “There are two kinds of punishment – constructive and destructive. Making a cadet do headroll down the stairs, walk on knees on blacktop roads, kambal Parade and beasting punishment are certainly destructive”.

The video could be a sample of what goes inside our military academies which never spills outside. What happens inside the academy stays in the academy, mostly until a slip lands such videos in the public domain.