Delivering a talk on 'Kashmir-Now and Way Ahead' at an event in Hyderabad, Sinha pressed for an urgent dialogue with "our own people" of Jammu and Kashmir, saying too much violence has already taken place and too many lives lost, including that of the security forces, and it's time to put an end to this. 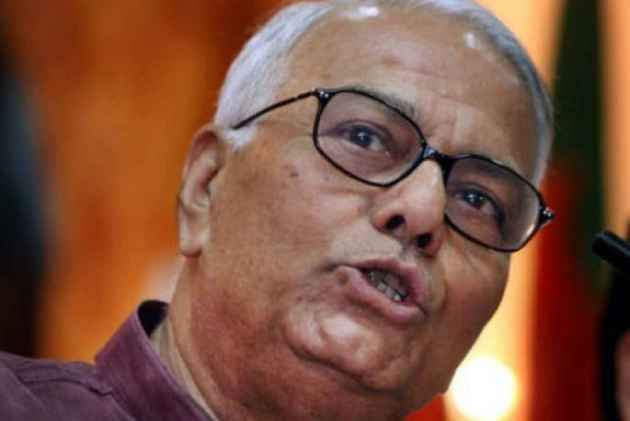 BJP leader Yashwant Sinha on Monday suggested that the Army should return to barracks in Jammu and Kashmir, leaving the anti-militancy operations to CRPF and state police, which he said would act "like a balm on the psyche" of the people there.

The former external affairs minister also said that Pakistan has become a "necessary third party" in the J&K issue because of "our own repeated mistakes".

Delivering a talk on 'Kashmir-Now and Way Ahead' at an event in Hyderabad, Sinha pressed for an urgent dialogue with "our own people" of Jammu and Kashmir, saying too much violence has already taken place and too many lives lost, including that of the security forces, and it's time to put an end to this.

He said it has now become the primary responsibility of the Army to be in the forefront in the fight against militancy in Jammu and Kashmir.

"In villages or towns, when there is militancy situation, it is Indian Army first, followed by the CRPF and J&K Police," Sinha said.

The former minister said he was against the excessive use of armed forces in controlling internal law and order situation, including in Jammu and Kashmir.

"There is a case for the Army going back to the barracks, leaving the operations (against militancy) to the CRPF and the J&K Police," he said, adding "It will act like a balm on the psyche of the people."

The CRPF is well equipped and trained to handle militancy like they tackle Left Wing Extremism problem in the country in collaboration with the local police, he argued.

He also said Kashmir was a political problem and people want the dialogue process to begin as was "promised" to them.

A large number of people in J&K had welcomed Prime Minister Narendra Modi's Independence Day message in which he had emphasised that the problem of the state will be solved neither by abuse nor bullets but by embracing all Kashmiris, he said.

"They were looking forward to a beginning of a political engagement. But, the first task is to identify the internal stakeholders. Please make up your mind who the stakeholders are. They have to be identified," the BJP leader said.

"Obviously the stakeholders will be political parties, civil society groups,intellectuals, trade bodies, the youth, the various regions of Jammu and Kashmir," he said, adding "Then we will have to decide who the interlocutor will be."

He said the day the Centre shows a keenness to begin the dialogue process and announces that "such and such person or persons will conduct it", there will be a dramatic improvement in the situation in the state.

"Let's begin the dialogue process with our own people ...Our own citizens in the state of Jammu and Kashmir," he said.

"It is time to begin dialogue process.... Because no human being wants violence. People want peace," Sinha said.

He went on to add, "There is an urgency attached to it because people are suffering. It is entirely our fault that the people of Kashmir are alienated from us and (since) we consider them our people, it is our duty to reach out to them and ensure that alienation subsides and is eliminated."

He said when Atal Bihari Vajpayee was the prime minister, he had decided to have this dialogue and nominated the then Deputy PM and Home Minister L K Advani.

"The government will now have to decide who the interlocutor will be and then set a timeframe for discussion and try and finish the consultations in this (particular) period," Sinha advised.

"Some time in future we will have to have a dialogue with Pakistan but that should not prevent us from beginning the dialogue process with our own people in Jammu and Kashmir," he said, adding "We have to hold Pakistan to that promise that it will stop exporting terror and violence".

In separate remarks, the former finance minister maintained that "demonetisation was not a good idea at all" and it should not have been attempted as "it has had very adverse impact on the economy."

Talking to a TV channel here, Sinha also said that the implementation of GST has been "flawed and the design of the GST has left much to be desired."

He said that in all countries where GST has been introduced, there has been generally one rate or at most two rates.

"..India also, to begin with, should have two rates -- one for the state GST and one for the central GST -- or at worst three rates," the former minister said.

He said there was no need for multiple rates because multiple rates in taxation system leads to lobbying, unecessary litigations and creates complications which are avoidable.