Arunachal Pradesh: Rescued Bear Cubs Are Being Readied To Be Released In The Wild

"During the ex-situ walks which are monitored by animal keepers accompanied by a biologist, the young bears learned to forage and gradually developed their wild instincts. Body morphometry and weight were recorded periodically," Basumatary said. 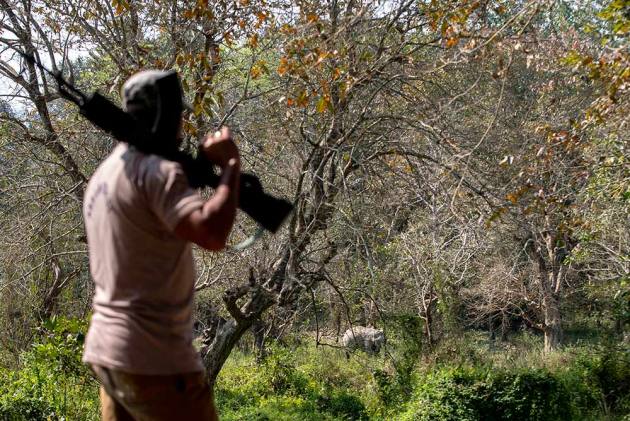 For Ruma, Anushka, Gueng, Kala and Kalee, each day begins with morning walks deep inside the jungle of Pakke Tiger Reserve (PTR) of Arunachal Pradesh. They play and fight with each other and are encouraged to climb trees and feed on fruits and insects before returning 'home'.

They are five motherless Asiatic bear cubs rescued by the Arunachal Pradesh Forest Department from different parts of the Northeastern state this year and rehabilitated at the Centre for Bear Rehabilitation and Conservation (CBRC) under Wildlife Trust of India (WTI), a conservation charity organisation.

Experienced forest department workers accompany them during their exercise which is part of a plan to release them in the wild when they are ready for it. "The Walk the Bear programme helps the orphaned cubs to acclimatise themselves to the wilderness where the keepers help them learn various life skills to survive," CBRC head Panjit Basumatary said.

The five young animals were shifted in two batches to a pre-selected site four kilometres away from Upper Dekorai camp of the PTR in September on vehicle, foot and elephant backs, he said. The PTR is situated at Seijosa in Pakke Kessang district, about 200 kilometers from state capital Itanagar.

"During the ex-situ walks which are monitored by animal keepers accompanied by a biologist, the young bears learned to forage and gradually developed their wild instincts. Body morphometry and weight were recorded periodically," Basumatary said.

Once the cubs become reluctant to follow their keepers back to the camp, they would be ear-tagged, micro-chipped and radio-collared for soft release in the wild. Eventually, if they do not return to their cages anymore, they would be considered wild. However, they would still be monitored for six more months, the CBRC chief said.

The cubs are currently being taken care of by their keepers Duluk Dagang, Pitar Lagun, Jemi Chawiriya, Antony Ngorang and field biologist Asish Immanauel Baglary. "The role of the rehabilitators is limited to protection and guidance during the acclimatisation process," Basumatary said.

Animals take time to adjust to a new environment and overcome the proximity to humans at the rehabilitation centre, said Suraj Singh, Divisional Forest Officer (DFO) of the tiger reserve. "The nature of bear cubs differs from one another as they sometimes do not adapt to the new environment. In such cases, we send them to zoos for captive rearing. However, we are successful in majority of the cases," he said.

While 44 cubs were released in the wild, only one was sent to Itanagar zoo. The rehabilitation programme for Asiatic bears started several years ago. The Asiatic black bear is the most commonly found bear in Arunachal Pradesh. Their population is on a decline due to anthropogenic pressures and poaching.