As Court Extends His Custody, Karti Chidambaram Smiles His Way Into CBI Vehicle, Tells Reporters 'See You On Monday'

The hearing went on for nearly an hour in the jam-packed courtroom and the Chidambaram family stayed put till the order was passed at 4.40 pm. 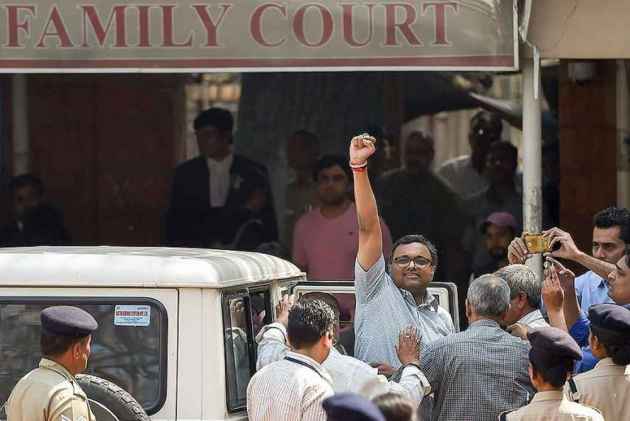 Unperturbed by a Delhi court extending his CBI custody for the fourth time and all the media glare, Karti Chidambaram told reporters, "See you on Monday," as he posed for the cameras yet again with a clenched fist, while being escorted by the agency's sleuths after the hearing on the INX Media case.

Just before Karti left the court premises, his supporters started raising slogans in his favour. Karti, the son of former Union finance minister P Chidambaram, smiled his way into the CBI vehicle and was taken away.

Karti was produced before the special court at 11.45 am. He sat in a corner inside the courtroom, but the matter was posted for hearing at 2 pm by Special Judge Sunil Rana.

Half an hour before the hearing commenced, Karti's father, senior Congress leader P Chidambaram and mother Nalini Chidambaram arrived in the courtroom and sat in the third row after a brief interaction with their son.

The hearing went on for nearly an hour in the jam-packed courtroom and the Chidambaram family stayed put till the order was passed at 4.40 pm.

During the waiting time before the order was passed, the former finance minister was seen interacting with the investigating officer of the case.