The DDMA meeting, chaired by Lieutenant Governor Anil Baijal and attended by Chief Minister Arvind Kejriwal, also discussed ways to strictly enforce existing restrictions to check the spread of the coronavirus and its Omicron variant. 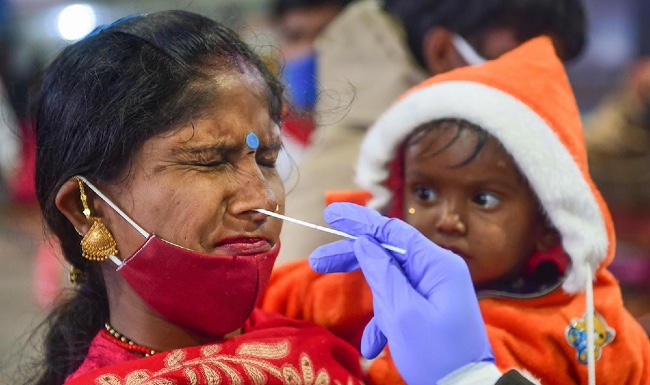 The Delhi Disaster Management Authority (DDMA) Monday suspended dine-in facility at restaurants in the city and shut down bars in view of the surge in coronavirus cases, but decided against imposing a full lockdown yet.

Some participants of the meeting proposed that restrictions imposed in Delhi should be extended to the National Capital Region in view of the unimpeded flow of people between the NCR cities. "In view of the increase in positive cases it was decided to close the restaurants and bars and to allow 'take away' facility only. It was also decided to allow operation of only one weekly market per day per zone," Baijal tweeted after the Delhi Disaster Management Authority (DDMA) meeting.

Officers were also advised to strictly ensure that people wear masks and adhere to social distancing norms in markets and public places to break the chain of transmission, he said in another tweet. As per the existing rules, restaurants were allowed operate dine-in facility at 50 per cent of their seating capacity from 8 AM to 10 PM. Bars in the city were also permitted to open with 50 percent seating capacity from 12 noon to 10 PM.

The LG in a series of tweets said that after detailed discussion with experts, it was advised to adhere to the strategy of Test, Track and Treat with emphasis on enforcement of Covid-appropriate behaviour to contain the spread of infection. Exercising vigil and regular review of the emerging data regarding positive cases, bed occupancy, geographical spread, number of deaths etc for appropriate action and containment measures to effectively tackle the situation were also advised, he said.

The Health department was advised to make adequate arrangements for additional manpower in hospitals and to scale up vaccination including those aged 15-18 years. It was also advised to employ positive messaging, particularly through the vernacular media to elicit community support and to advise the citizens against any panic reaction, Baijal said.

The experts and officials of the Delhi government also discussed reducing the seating capacity in Metro trains and city buses from the current 100 per cent to 50 per cent, according to an official present in the meeting. However, there were differences on this issue with officials citing huge crowds at bus stands and Metro stations when the seating capacity was reduced to half after the DDMA imposed Yellow alert on December 28.

The full seating capacity was later restored to 100 percent to avoid crowding at Metro stations and bus stops. According to the data shared in the meeting, 755 calls were received at the Covid helpline 1031 number between January 1-7. For Tele medical consultancy service, log in ids of 65 doctors are created who attend the calls on shift basis and provide their consultancy. Covid helpline number 1031 is operational 24x7 and currently it is running with 25 operators along with 150 phone line.

Kejriwal had on Sunday said the rapid speed at which the coronavirus was spreading in Delhi had been a matter of "deep concern", but there was no plan to impose lockdown just yet. There would be no lockdown if people wear masks, he had stated.