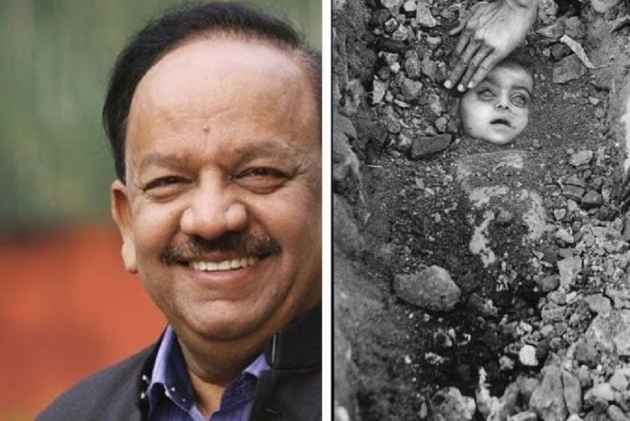 Even as Delhi breathes toxic air tantamount to smoking 50 cigarettes every day, Union Environment Minister Harsh Vardhan continues to assert that it is no 'emergency'. Emergency, he believes, was the Bhopal Gas Tragedy of 1984.

"You see, what happened in Bhopal when there was a gas leak and hundreds of thousands of people fell acutely sick and had to be rushed to the hospital. We call that an emergency situation where you have to panic and you have to see what you have to do," he told news channel News18, when questioned about the air quality in Delhi which has reached 'severe' level and forced the govt to shut schools and halt construction.

Bhopal Gas tragedy, the world's worst industrial disaster claimed the lives of 25,000 people in 1984. While attempting to justify that the smog and worsening air quality in Delhi is not an emergency situation, Vardhan compared it with the former and said that's 'where you have to panic'.

Discrediting global reports on pollution-related deaths that has placed India on number 1, Vardhan said 'no death certificate has cause of death as pollution.'

According to a report by The Lancet Commission on pollution and health, India tops pollution-related deaths in the entire world, leaving China behind. India has reported 2.5 Million deaths due to air pollution in the country in 2015, the most in the world, followed by China.

India also accounted for about 28 per cent of an estimated nine million pollution linked deaths worldwide in 2015.

As Delhi turns into a 'gas chamber' with air pollution level reaching 'severe' levels and the city engulfed in heavy smog, the High Court termed it an 'emergency' and health ministry directed all the central government-run hospitals to take measures to deal with the increasing number of patients, but Harsh Vardhan, who holds the portfolio of Science, Technology and Earth Sciences, is not worried.

"Certainly if you have a diseased lung and if the pollution is continuously damaging your alveoli (air sacks) then one day when you die, you can attribute the cause of death, to some proportion, to maybe pollution. But I don't think we can generalise and say that millions of people are dying only due to pollution," he had earlier told news channel NDTV.