As Up Bananas Catch PM’s Eye, Farmer Seeks To Treat Him To It

Attracted by the size of bananas on the stall, Modi observed that they appear to be quite big. "Sir, this is a branded banana. It is called 'naveen kelaa”. Please give me a chance, please call me, I will bring the banana for you,” an effusive Dharm Chand gushed. 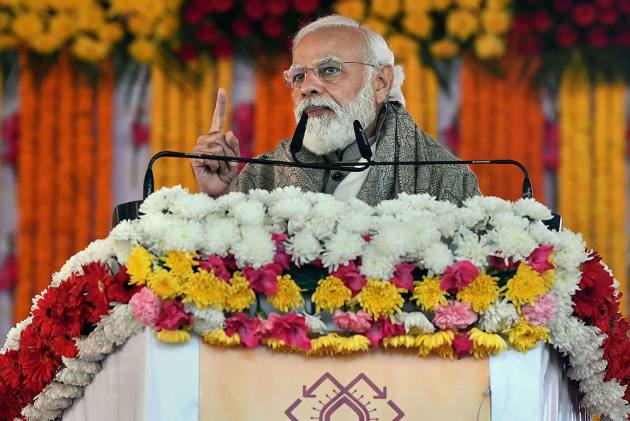 Prime Minister Narendra Modi's video interaction with farmers across the country during the release of funds under the PM-KISAN scheme on Saturday witnessed a lighter moment when a Lucknow farmer wanted to treat the PM to special bananas grown by him.

The farmers at various centres across the country had their agricultural products, including fruits, vegetables and crops displayed on stalls for the Prime Minister to inspect them. As the Lucknow farmer Dharam Chand’s stall caught the PM’s attention, he asked, “You have kept so many products here. Have all these been grown by small farmers?" To this, an elated Dharm Chand, a member of Uttar Pradesh Farmers' Producer Organisation said all the items have indeed been grown by small farmers.

Attracted by the size of bananas on the stall, Modi observed that they appear to be quite big. "Sir, this is a branded banana. It is called 'naveen kelaa”. Please give me a chance, please call me, I will bring the banana for you,” an effusive Dharm Chand gushed, triggering laughter among the audience, besides a smile on the PM’s face. "The confidence with which you are speaking -- and the farmers of the country are listening to you -- everybody will get inspiration. You have done value addition to the hard work of farmers and given a new strength (to them)," PM Modi told Dharam Chand approvingly.

Replying to the PM’s observation, Dharm Chand said farmers are the capital of the FPOs. "We provide high-yielding seeds to farmers. We also motivate them to do organic farming. We also cultivate flowers," he said. Asked by the PM how flowers are marketed, he said they are sold in the local 'phool mandi' (flower market). On the occasion of the release of the 10th instalment of financial aid under the PM-KISAN scheme, Prime Minister Modi on Saturday released over Rs 20,900 crore to more than 10.09 crore farmers across the country.

Modi released the amount to beneficiaries at an event held through video conference. Under the Pradhan Mantri Kisan Samman Nidhi (PM-KISAN) scheme, a financial benefit of Rs 6,000 per year is provided to the eligible farmer families in three equal installments of Rs 2,000 each. The money is transferred directly to the bank account of the beneficiaries. During the virtual event, the Prime Minister also released an equity grant of more than Rs 14 crore to about 351 Farmer Producer Organizations (FPOs), benefiting 1.24 lakh farmers. The virtual event was attended by as many as nine chief ministers, several ministers from different states, and representatives of agricultural institutions.