Asad Ali Khan: The Master Who Blended The Spirit of Music And Yoga

Rudra veena is a challenging classical instrument that insists the player sits in a yoga posture. An overview, on the occasion of the World Music Day and International Yoga Day 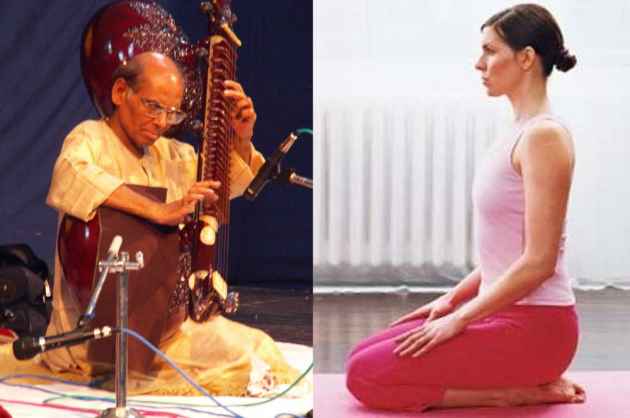 In 1982, when Paris first conducted a milestone all-day concert, India’s Asad Ali Khan was becoming a busy performer of the weighty rudra veena across the West. The French initiative on that summer solstice subsequently initiated the World Music Day, while four years after Hindustani ustad’s death in 2011, his country’s government began what is called the International Yoga Day.

If June 21, which gives people of the northern hemisphere their longest day of year, is today both World Music Day and Yoga Day, Asad Ali Khan was one of the orthodox artistes who insisted all his life that the giant rudra veena be played in the vajrasana posture where the person sits upright on the heels.

Now, this is particularly challenging, given that the 10-kg rudra veena with its two big gourd resonators attached to a long wooden tube that carries the bridge, frets and pegs is in itself not an easy instrument to play, let alone master. But then, neither is Hindustani music in its essentiality mere entertainment—and that inherent sobriety perhaps calls for a physical positioning that can add to the player’s mental focus. In other words, vajrasana, for its difficulty to perfect, can de facto guarantee a spiritual exercise while playing the rudra veena in the yogic posture.

Asad Ali Khan died on June 14, exactly a week before the summer solstice—or the sun’s start of the virtual southward journey called Dakshinayana, the day India chose to observe as the International Yoga Day since 2015. Even towards the evening of his life as a frail septuagenarian, the Delhiite from western Rajasthan’s Alwar made no compromise on his posture while playing a meditative raga—be it at a concert or back in his practice session or while teaching the few students the nuances of the grand performing tradition. He would sit on the heels with the calf muscles beneath the thighs, leaving roughly the prescribed four-finger gap between the kneecaps. The spine would be upright even as the first toe of both the feet brushes each other.

Yoga texts note that the posture smoothens metabolism besides, of course, strengthening the legs as a whole. That anyway can only be a by-product when it comes to playing the rudra veena. As Asad Ali Khan (1937-2011) notes, the player cannot earn the desired impact on the instrument unless (s)he sits in that position after position the rudra veena on the shoulder and uses one’s breath as a modulator for notes. “The nuances of the notes if he changes his posture,” the master tells a newspaper in a mid-2009 interview. “The student is trained to sit in vajrasana from day one as he has to play the instrument in that posture.”

A fresh streak of pride is obvious in the ustad when tells The Hindu in that one-on-one that his ancestors were court musicians from Alwar, from where his father moved over to Rampur (in Uttar Pradesh). While his first radio broadcast (AIR) was in 1953, Asad Ali Khan made his debut performance seven years later—at the prestigious Tansen Music Festival in Gwalior (Madhya Pradesh).

The conventional insistence on the yoga posture, though, had its flip side. For centuries, the rudra veena failed to get a female practitioner as the general belief was that the weighty instrument with baritone sounds could be harmful for the uterus. Down south of the country, Karnataka’s Jyoti Hegde broke that taboo in the last quarter of the previous century. Now in her middle age, the native of Sirsi in North Kanara district began learning the rudra veena when she was 16, weathering ripples of apprehensions and disapproval from the art fraternity around. Today, Jyoti is a noted rudra veena player, having earned ‘A’ grade from All India Radio after having completed her music course from Karnatak University in upstate Dharwad. “I am married, we have a son,” she says, with a smirk, tacitly allaying fears about the “anatomical troubles” that rudra veena-playing can invite.

Scholar Ram Chandrakausika notes that the rudraveena was “till nowadays frightened for her mystic and mighty spiritual auratic power”. In a 2014 blog, he goes on to write that the instrument, basically, is “not bound to style, because her style is worshipping god and initialisation of deeper type of inner meditation for religious communication”.

Senior author-musician Deepak Raja quotes Asad Ali Khan as telling him that it’s once an artiste acquires sufficient command over the sitar that he is allowed to graduate to the rudraveena—also called been. “We make sure that by this time, the student can sit for hours in the posture of Vajrasana,” the ustad tells the scholar in a conversation back in 2000. “Most (students) will take 15 years to become respectable performers.”

A bachelor, Asad Ali Khan, who won the Padma Bhushan in 2008, had performed before audiences in several parts of Asia and Europe as well. His end came at Delhi’s All Indian Institute of Medical Sciences. Today, as the world celebrates the Music Day and Yoga Day, the ustad stands out a figure who linked well the spirit of both the festivities—in a thoroughly Spartan way.