Ashok Gehlot had played an active role in formulating the Congress party's campaign strategy in Gujarat. 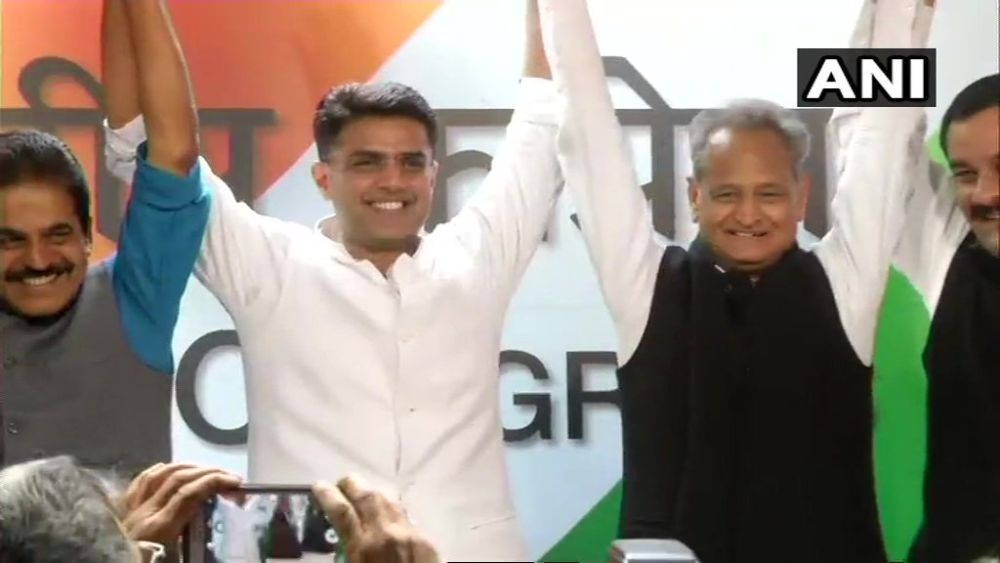 The Congress on Friday named Ashok Gehlot as Rajasthan's next chief minister and Sachin Pilot his deputy after party president Rahul Gandhi successfully brokered peace between the veteran leader and his younger colleague following several rounds of discussions.

After Congress' observer to the state K C Venugopal made the announcement at a media briefing here, Gehlot thanked Gandhi for giving him an opportunity to serve the people of the state for the third time and promised that he and Pilot will give "good governance".

Pilot exuded confidence that Congress' good electoral performance will continue, saying  the party will get a big mandate in 2019 polls and form the government.

"We will meet the governor today and will decide on the details of the oath-taking ceremony," Venugopal said.

In a sign that the leadership question in Rajasthan has been settled, Gandhi on Friday posted his photograph with Gehlot and Pilot.

The photograph of the smiling leaders had a caption "United Colours of Rajasthan!", without giving any hint as to who will be the Chief Minister. An official announcement is expected in the evening.

The united colours of Rajasthan! pic.twitter.com/D1mjKaaBsa

Gandhi's tweet capped hectic consultations with Gehlot and Pilot, who put up his claim strongly even as members of the Gujjar community took to the streets on Thursday and Friday demanding that he should get the top slot.

Gehlot, a two-time Chief Minister, and Pilot reached Gandhi's residence within minutes of each other on Friday.

Ahead of the meeting, Gehlot took a veiled dig at Pilot saying that the party unit had already left the decision on Gandhi and it was not the time to express individual choices.

"We have given the duty to the High Command. Let it decide who is to be given what responsibility. If I say my choice is this, it is not time for that. The time is to strengthen the Congress, see how its graph goes up.

"If Congress is strong, everyone will be empowered and we prove to be useful in meeting the objectives of the 2019 elections. This alone should be our thinking," Gehlot said.

He said a resolution had been passed by newly elected MLAs in Rajasthan authorising the High Command to take a decision.

"Whether it is Rajasthan, Madhya Pradesh or Chhattisgarh, once a resolution is passed, the decision of the Congress President should be acceptable to all. This is what our workers, MLAs and people expect," he said.

He said winning elections in the three Hindi heartland states was a big achievement and that it all started with a strong performance of the Congress in Gujarat under Gandhi's leadership.

"(Prime Minister Narendra) Modi and (BJP President) Amit Shah have lost their aura. They have not been able to recover due to which we won elections in the three states," he said.

Gehlot had played an active role in formulating the party's campaign strategy in Gujarat.

Friday's meeting came hours after the leadership issue was settled in Madhya Pradesh, with Gandhi tweeting his picture with Kamal Nath and Jyotiraditya Scindia, who were both chief ministerial aspirants.

The picture -- akin to the one on Friday -- carried the line "The two most powerful warriors are patience and time - Leo Tolstoy."

The two most powerful warriors are patience and time.

Both in Rajasthan and Madhya Pradesh, the Congress missed the majority mark by two seats and is now dependent on external legislative support.

Pilot, who stayed put in Delhi on Thursday, appealed to party workers to maintain peace and that he would welcome any decision taken by the party.

Pilot reportedly has put up a strong claim to the post on the ground that he had galvanised the party after the defeat in 2013, when he was appointed the state party chief.