Ashoka Had De-Militarised Himself, The BJP Is Busy Re-Militarising Him

Ashoka, father of Sanghamitra and Mahendra, is not remembered in Bihar or elsewhere as a conqueror but as who went to Buddhism in his quest for a rightful, non-violent way of life 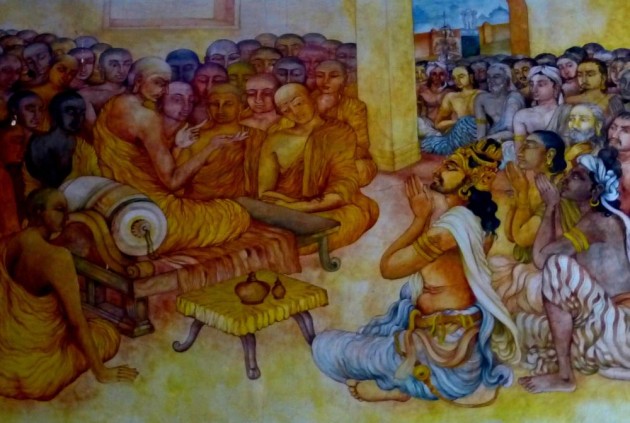 Patna recently turned witness to yet another celebration of Ashoka the great.

The BJP was reminded of the greatness of Ashoka in the run-up to the Bihar elections in 2015. The party projected Ashoka as a Kushwaha, an influential caste group in Bihar. People saw through the new-found respect for the invented ancestry of Kushwahas.

Historians such as Romila Thapar expressed ignorance of Ashoka having any affiliation to this particular caste. But she is already tainted as a secular historian, so why pay heed to her protestations.

A historian who cannot be blamed for having a left-bias, Nayanjot Lahiri, who has written a book on Ashoka, trashed this claim too. But BJP would not be the BJP if it halted in its tracks after scholarly or intellectual admonition. So, it repeated its Ashoka event this year and harped on the Kushwaha connections of Ashoka. We need not go back to a foreigner like Goebbels to know that when repeated hundred times, a lie becomes the truth. The party seems to be firmly committed to this dictum.

Newspapers had beaming faces of the state leaders of the BJP brandishing swords to mark the occasion. They hailed Ashoka as a great empire builder. And again, by design, he was compared with, who else, but the present emperor who adorns the throne of Delhi. It was said by a leader of the BJP that it is only the present leader who has achieved what Ashoka had done in his time, in terms of empire-building.

To make such misleading claims is bad enough but worse is the attempt to misuse the visit of Dalai Lama for narrow partisan ends.

Even if we leave that aside, we see in these claims the political instinct of the BJP; which is not democratic but rooted in some imagined-old-idea of empire expansion. It exposes its real character, which is essentially imperial.

Sushil Modi, who served as a loyal Lakshman to Nitish Kumar for eight long years and was on his side when he had snubbed the then chief minister of Gujarat, is hard at work to wipe off the old stains. He first earned the ire, then the wrath of new leader for his disloyalty. Since then, the poor Modi from Bihar has been trying to show his leader that he is second to none when it boils down to sycophancy. It was he, who in 2013, had announced that the BJP was to give this country its first extremely backward caste Prime Minister after the elevation of Narendra Modi.

So, one can understand why he compares Ashoka with the present Prime Minister.

But why were swords flashed in a function celebrating Ashoka? Ashoka, father of Sanghamitra and Mahendra, is not remembered in Bihar or elsewhere as a conqueror or as an emperor. Emperor he was, but in popular imagination he is a king who grieves and repents for the bloodshed with which his victory over Kalinga was achieved. He is great not because of the length and breadth of his kingdom but because he took upon himself to spread the message of love, compassion and togetherness not only in the land he had command over, but outside of it too.

In the heart of Patna is Mahendru ghat, a particular spot on the banks of Ganga from where ships sailed for farther shores. It is named after the son of Ashoka who, legend has it, sailed from here on the orders of Ashoka to Sri Lanka to spread the message of Buddha.

Ashoka embraced Buddhism in his quest for a rightful, non violent way of life. It can be said that it was his missionary effort which helped Buddhism spread far and wide. Needless to say, after the violence at Kalinga, Ashoka could not find the adequate resources to answer his questions in what would have been Hinduism at that point of time. He had to turn to the Buddha.

It is not surprising that Buddha and Ashoka were two figures very close to the heart of Nehru, the modern agnostic nation-builder of India. It was this that led him and other colleagues of him to opt for the Chakra from the Ashokan pillar of Sarnath for the national flag.

Nehru was looking for a symbolic representation of the chakra to be placed in the middle of the National flag. He writes that hundreds of Chakras came to his mind until he stopped at Sarnath. It was a Chakra which perfectly reflected the philosophy of Gandhi's Charkha. Values of non-violence combined with dignity of labour. Gandhi approved of it.

It was Lal Krishna Advani who once objected to the adoption of the Chakra from Sarnath. He said that it shows that the flag was not secular as it had a Buddhist symbol on it.

Ashoka is never remembered as a warrior. He is one who renounces war and imperial ambitions, but the BJP is trying to erase this memory. It is part of its cultural manipulation which it uses elsewhere too. For example, in the eastern part of Uttar Pradesh, it is trying to turn the legend of Ghazi Mian on its head. Ghazi Mian is a cult figure in the area, venerated both by Hindus and Muslims. He is said to have died fighting with Suhail Dev to save the cows and cattle of his people. But the BJP has launched a campaign to persuade Hindus, and Rajbhars that they have been fed the wrong chapter from history and they should instead celebrate Suhail Dev as their leader and not Ghazi Mian, a Muslim! The BJP government even got a train named after him to power this campaign.

Generations have revered figures like Ashoka or Akbar as universal symbols who represent what is best about India. The BJP is now reducing them into caste or clan leaders. Just prior to the general elections of 2014, it organised a huge function to celebrate Dinkar, the legendary poet from Bihar who is known as Rashtra Kavi. People in Bihar did not miss the symbolism. It was a cynical move to culturally appeal the powerful Bhumihar community to which Dinkar belonged.

It remains to be seen how Buddhists react to the attempt of militarisation of the Buddhist message. Ashoka had de-militarised himself. The BJP is re-militarising him and deploying him in its Ashwamedha Yagya to capture all of India.