India, chasing a record-extending seventh title fielded a full-strength team by bringing back all five players who have missed out in the last game against Afghanistan. 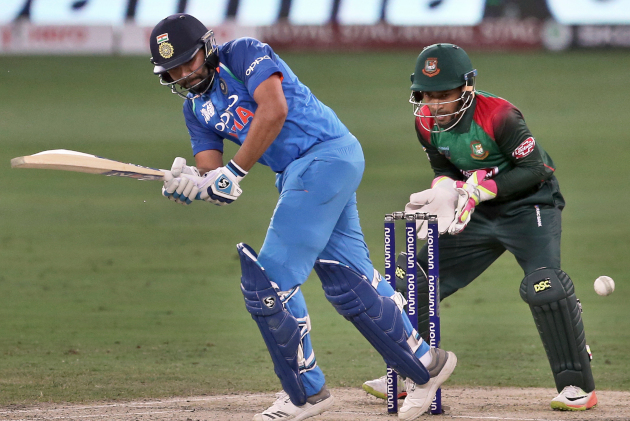 India captain Rohit Sharma won the toss and elected to bowl first against Bangladesh in the final of 2018 Asia Cup at Dubai on Friday.

Chasing a target of 223 runs, India got off to a good start. But after the fall of Shikhar Dhawan, Indian middle order imploded, leaving the tailenders complete the chase.

India Vs Bangladesh: When And Where To Watch Asia Cup Final Match Live

Asia Cup Final: Five Players To Look Out For

Needing six runs from six balls, Kuldeep Yadav faced Mahmudullah in the first ball of the last over. Fit-again Kedar Jadhav joined the run chase again. After two singles off the first two balls, Kuldeep lofted the third ball for a double. He then blocked the next ball to make it 2 from 2. A single. One, scores level. The ball drifted down the leg, and leg bye to give India their seventh Asia Cup title.

After Dhoni's departure in the 37th over, Kedar Jadhav also returned back to the pavilion, retired hurt. Ravindra Jadeja and Bhuvneshwar Kumar are keeping Indian hopes alive. India need another 45 runs from 54 balls.

Kedar Jadhav needed medical attention, which forced play to stop for while. Indian all-rounder clutched while completing a single.

Meanwhile, India have reduced the gap to another 63 runs.

Mahmudullah trapped Dinesh Karthik in front for another twist in the match. It ended a 54-run stand for India. Dhoni is joined by Kedar Jadhav.

India's first 50-run stand. Dinesh Karthik swept well to find his first boundary of the innings behind the wicket. After the end of 29th over, India were 134/3, still needing 89 runs.

India still need another 133 runs. The two specialist wicket-keepers are in the middle batting, plotting to wear down Bangladesh bowlers.

Rohit Sharma gone. Indian captain tried to play a pull shot, one of his favourites shots, but the ball hurried onto him, thus resulting in a mistimed shot. Caught at deep square leg by Nazmul Islam off Rubel Hossain.

New man MS Dhoni survived the second ball faced. Lucky, he got some inside edge. At the end of 17th over, India were struggling at 83/3.

Huge mixed up between Rohit Sharma and Dinesh Karthik while attempting for a single off the last ball of the 15th over. No harm was done though as Liton Das failed to collect the ball at mid-off.

Rohit, three runs away from his fifty, is batting beautifully with Karthik giving him support. Lot of overs to play.

India lost two quick wickets, with Ambati Rayudu joining Dhawan back in the hut. Bangladesh skipper Mashrafe Mortaza leading from the front, brilliant bowling from the pacer to get rid of Rayudu, caught behind.

The wicket left India at 46/2 after 7.3 overs. Rohit Sharma and Dinesh Karthik are in the process of rebuilding the Indian innings.

India lost opener Shikhar Dhawan. He went after the spinner, but ended up offering an easy catch to Souyma Sarkar at mid-off.

It happened off the fourth ball of the fifth over. Ambati Rayudu is the man for India. Skipper Rohit Sharma unbeaten on 27 off 19 balls.

Mehidy Hasan started the proceedings and conceded 10 runs. Mustafizur Rahman gave away just two runs from the second over of the innings. Mehidy then leaked another five runs from the third over.

Despite a good start from the openers, Bangladesh just managed 222 against India. Liton Das hit his maiden hundred, 121 off 117. he posted 120 for the first wicket with promoted Mehidy Hasan, then India took over.

For India, Kuldeep Yadav took three wickets, and there were three run-outs too.

Smart work from substitute fielder Manish Pandey to run Nazmul Islam out after a deadly mixed up with Soumya Sarkar in the 47th over.

It was followed by another run-out, a third of the innings off the first ball of the 49th over.

Bangladesh added 25 runs in the last five overs, losing two wickets – those of Liton Das and Mashrafe Mortaza – both stumped by MS Dhoni of Kuldeep Yadav.

Wicket: Mashrafe Mortaza st MS Dhoni b Kuldeep Yadav 7 (9b) off the fifth ball of the 43rd over.

Soumya Sarkar and Nazmul Islam are unbeaten at 26 and 6 respectively. Kuldeep Yadav completed his spell, for figures of 10-0-45-3.

An absolute beauty from MS Dhoni. Stumped Liton Das off the last ball of the 41st over, bowled by Kuldeep Yadav. Tv umpire Liton Das took an eternity to come to the decision.

But a brilliant hundred from the Bangladesh opener. Soumya Sarkar joined by Mashrafe Mortaza.

Liton Das and Soumya Sarkar in the process of rebuilding the Bangladesh innings even as Indian bowlers continue to apply pressure on them. 14 runs from the last five overs.

India have dominated Bangladesh in the middle overs. Conceded 13 runs and took one wicket in the last five overs. Brilliant catch at deep by Jasprit Bumrah. First wicket for Kuldeep Yadav

Soumya Sarkar is the new man. Liton Das unbeaten on 104.

Hundred for Liton Das. He reached hundred with a single off the fourth ball of the 29th over, bowled by Kedar Jadhav. He took 87 balls.

Three wickets in six overs, and Indian spinners have shown their worth. Kedar Jadhav got his second, a big wicket in the form of Mushfiqur Rahim. Bangladesh's star batsman failed to pick up the fielder at deep mid-wicket, and Jasprit Bumrah gleefully accepted the catch.

That happened off the fifth ball of the 27th over. Mohammad Mithun is the new man.

Then, a huge mixed up between the two batsmen following a brilliant stop at cover by Ravindra Jadeja. The Indian fielder calmly relayed the ball bowler Yuzvendra Chahal at the non-striker's end to send back Mithun.

That happened off the last ball of 28th over. 11 runs and three wickets in the last five overs.

Wicket-maiden for Yuzvendra Chahal as India wrested back the initiative from Bangladesh. He trapped new man Kayes, and it returned as umpire's call after Bangladesh challenged the initial decision. That happened off the fifth ball of the 24th over. Mushfiqur Rahim is the new man. 17 runs and two runs in the last over. Surely, India's period.

Kedar Jadhav struck in the first over. Finally, the opening stand broken. Mehidy Hasan failed to make time his hit and ended up offering an easy catch to Ambati Rayudu at cover.

But Mehidy has done his job. An opening stand of 120 runs in 125 balls is brilliant.

Meanwhile, Liton Das has posted the highest individual score for Bangladesh in a final. previous best was Sabbir Rahman 77 against India in 2018 final.

Imrul Kayes is the new man for Bangladesh. Das is unbeaten on 91 off 72.

Brilliant start from the Bangladesh openers. Liton Das and Mehidy Hasan have posted Bangladesh's first 100+ opening stand, first in two years. At Drinks, das was unbeaten on 73 from 56 balls, while Hasan was at 27 from 52.

Liton Das brought up his maiden ODI fifty with a four off the first ball of the 12th over, bowled by Ravindra Jadeja. And together with a reticent Mehidy Hasan, posted 93 runs in 16  overs as Bangladesh dominated India. Das, two balls after reaching the fifty, got a reprieve on the 12th over when Yuzvendra Chahal, running back, dropped a skier at mid-wicket.

Bhuvneshwar Kumar made a strong comeback, conceding only a single in the 10th over. Liton Das is three away from his maiden ODI fifty, while promoted Mehidy Hasan is batting cautiously at 16.

After a cautious start, Liton Das has changed the gears. He has hit three fours, including two successive boundaries against Bhuvneshwar Kumar. His opening partner Mehidy Hasan has done well to hang on there.

Meanwhile, here's a quick look at Bangladesh's record in finals:

Cautious start from the Bangladesh openers, Liton Das and promoted Mehidy Hasan.  Bhuvnehswar Kumar started the proceedings, three runs from the first over. Jasprit Bumrah, who shared the new ball, leaked five runs in the next over. Bhuvi conceded five runs from his second over.

India, chasing a record-extending seventh title, fielded a full-strength team by bringing back all five players who have missed out in the last game against Afghanistan.