The win helped India qualify for the summit clash of the 2018 edition of Asia Cup, which they have won six times. 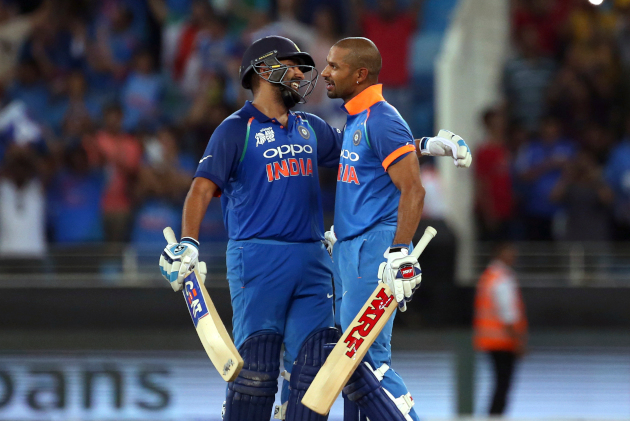 For all the hype, the second instalment of the India-Pakistan rivalry in the ongoing Asia Cup ended with the defending champions India defeating Pakistan by nine wickets at Dubai. India also won their Group A meeting by eight wickets. And yet, there is still a possibility of the two teams meeting in the final.

Much was expected from the Super Four match, but it became just another routine outing for Rohit Sharma & Co. Skipper Rohit and his deputy Shikhar Dhawan showed their mastery in white ball cricket with stylish hundreds.

In another Super Four match, Bangladesh defeated Afghanistan by three runs at Abu Dhabi. As things stand now, India have four points from two wins, while Pakistan and Bangladesh have two points each, with the two-time champions in the second position by virtue of better net run rate. Winless Afghanistan are at the bottom with no points.

In the final Super Four round, India will take on Afghanistan at the same venue on Tuesday, while Pakistan play Afghanistan a day later at Abu Dhabi, in a virtual semi-final. Two top teams will play the final on September 28.

Chasing a target of 238 runs, India wrapped up the match with 63 balls to spare. This is India's biggest win against Pakistan in terms of the number of wickets lost.

Rohit (111 no off 119 balls) and Dhawan (114 off 100 balls) flayed the Pakistan attack adding 210 runs for the opening stand to seal their second lopsided victory in the tournament in only 39.3 overs.

Their opening stand of 210 is the highest for India in ODI run chases, surpassing the unbeaten 201 between Gautam Gambhir and Virender Sehwag against New Zealand in Hamilton in 2009.

It is India's fourth highest opening stand for India in all ODIs, and second highest partnership against Pakistan, after 231 by Sachin Tendulkar and Navjot Singh Sidhu at Sharjah in 1996.

The left-handed opener now has an envious average of 65.28 in multi-nation tournaments involving five or more sides. The 32-year-old has scored 1632 runs with the help of seven hundreds in 26 games in such tournament.

One of the most fearsome opening pairs in ODI format, Rohit-Dhawan combination were helped by some ordinary bowling from Pakistan with equally sloppy fielding compounding their woes.

Their understanding in 22 yards is exemplary and as Dhawan teed off with a flurry of boundaries, Rohit was ready to hold one end up.

Dhawan, who is comfortable on pitches where there is lack of movement played some lovely drives on the up. He also pulled with ferocity and cut anything wide.

Dhawan also gave the same treatment to a woefully out of form Mohammed Aamir (0/41 in 5 overs).

Dhawan's 50 came off 56 balls with a pulled boundary while Rohit took 65 balls to reach the mini-milestone.

However, after completing their fifties, it was a role reversal with the skipper suddenly shifting gears as he hit leg-spinner Shahdab Khan for two sixes over deep mid-wicket.

Dhawan reached his 15th hundred with a cover drive off Afridi and celebrated it with a huge six and a boundary before being needlessly run-out. His innings had 16 fours and two sixes.

Just like his half-century, Rohit scampered home for a double to complete his 19th ton and on the way also completed 7000 runs in ODI format. By the time the match ended Rohit had hit seven fours and four sixes.

Veteran Malik scored 78 off 90 balls and added an invaluable 107 runs for the fourth wicket with skipper Sarfraz Ahmed (44 off 66 balls) to enable Pakistan post a fighting total.

The Pakistan innings could be segregated into three distinct parts. A slow start where India made inroads followed by solid middle-overs batting before failing to utilise the launch pad fully with Jasprit Bumrah (2/29 in 10 overs) being brilliant at the death.

India once again started well with Mahendra Singh Dhoni's penchant for getting DRS reviews right after Yuzvendra Chahal (2/46 in 9 overs) got his first wicket by trapping Imam ul Haq (10) in front of the stumps.

Fakhar Zaman (31) was set but lost his footing trying to sweep Kuldeep Yadav (2/41 in 10 overs) to get leg before. The replays showed that the ball hit his gloves first but Pakistan didn't take a review.

Babar Azam was run-out when his skipper got a call for single wrong as Pakistan were reduced to 58 for three.

However, it was the Malik-Sarfraz combination that provided the launch pad with their sensible approach during the middle overs.

The seasoned duo kept on rotating the strike, hitting the boundaries and sixes whenever given an opportunity.

Malik, who is a master player of spin bowling, hit Yuzvendra Chahal for a slog sweep and also played Kedar Jadhav (0/20 in 3 overs) well. Jadhav was hit for a couple of boundaries in a single over as he dropped short.

Without trying to defend, Malik-Sarfraz got singles at will against Jadhav, prompting Rohit to take him off attack after only three overs.

Ravindra Jadeja (0/50 in 9 overs) after a good match against Bangladesh was flat and Malik used his feet to perfection lofting him straight into the VIP stands for a six.

Sarfraz, who played second fiddle to perfection was finally dismissed when he tried to hit Kuldeep over cover only to be snapped by Rohit Sharma.

Malik was joined by Asif Ali (30 off 21 balls), who teed off by smashing Bhuvneshwar Kumar for two sixes and a boundary in the 42nd over, that fetched Pakistan 22 runs.

However, there was another twist left as Jasprit Bumrah, coming back for his final spell got an inside edge off Malik's bat to get him caught behind. His innings had four boundaries and two sixes.

Asif, who looked like cutting loose, missed a googly from Chahal to get bowled as Pakistan lost the momentum.

Bumrah was phenomenal at the death, bowling block-hole deliveries at will. In all, he bowled 39 dot balls in his 10 overs and Pakistan could score only 38 runs in their last seven overs.