Dhawan has scored 1632 runs in 26 innings at an average of 65.28 in multi-nation tournaments featuring five or more teams. 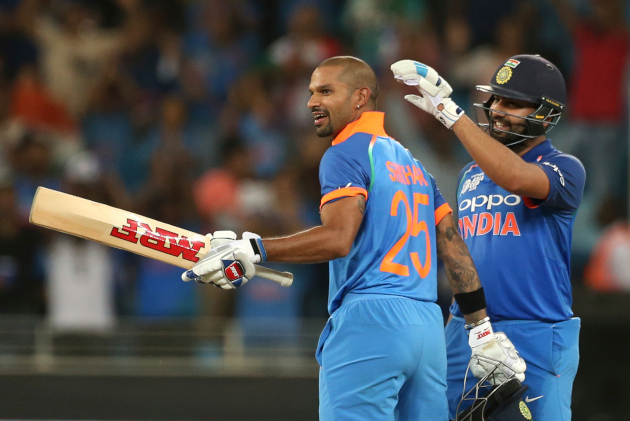 India defeated Pakistan for the second time in five days in the ongoing Asia Cup.

Indian openers Rohit Sharma and Shikhar Dhawan made a mockery of 237-run target set by Pakistan with their record-breaking opening stand at Dubai on Sunday.

Here are the highlights from the Super Four match:

- Rohit and Shikhar's opening stand of 210 runs is the highest opening partnership for India in run chases. Previous best was an unbeaten 201 by Gautam Gambhir and Virender Sehwag against New Zealand in Hamilton in 2009.

- The highest opening stand for India in ODIs, however, belong to Sourav Ganguly and Sachin Tendulkar, who scored 258 against Kenya at Paarl in 2001. The legendary duo also posted the second highest stand (252), against Sri Lanka at Cuttack in 2014.

- 210 is also the highest opening and the second highest Indian partnership for any wicket against Pakistan, behind Tendulkar and Navjot Singh Sidhu's 231 for the second wicket in Sharjah in 1996.

- This is India's third 200+ partnership against Pakistan after Tendulkar-Sidhu's 231 and Sehwag-Rahul Dravid's 201. Pakistan have five 200+ stands in the same fixtures.

- The previous highest opening stand for India against Pakistan was 159 by Ganguly and Tendulkar at Dhaka in 1998.

- It's also the 13th 100+ partnership for Rohit and Dhawan in 82 innings together, second behind Ganguly and Tendulkar's record 21.

- Rohit and Shikhar became the third India pair to score individual hundreds in the same ODI against Pakistan. Tendulkar (118) and Sidhu (101) in Sharjah in 1996, and Sehwag (108) and Rahul Dravid (104) in Kochi in 2005 have previously achieved the feat.

- Rohit became the fifth fastest after Hashim Amla (150 innings), Virat Kohli (161), AB de Villiers (166) and Ganguly (174) to score 7000 ODI runs. HE took 181 innings to reach the milestone. He is the ninth Indian batsman to do so and is third behind MS Dhoni and Virat Kohli among the active players.

-Dhawan and Ganguly also shared the record for most hundreds, seven each, in such tournaments.

- And not to forget Yuzuvendra Chahal's 50th wicket, he is fifth fastest Indian to reach the mark, in terms of matches, after Ajit Agarkar (23), Kuldeep Yadav (24), Jasprit Bumrah (28) and Mohammed Shami (29). It was his 30th match.